After ash emissions in the morning, a very powerful Strombolian episode occurred at  Agung yesterday 2 July at 9:04 pm WITA; it was accompanied by a loud noise of explosion, and projections of incandescent materials up to a height of 2,000 meters, which fell back on about the upper third of the volcano, causing consequent forest fires.

A thick plume of ash has developed into a mushroom, traveled by lightning, climbing up to a height of 2,000 meters above the crater, inclined towards the west, direction then taken by the cloud of ashes. 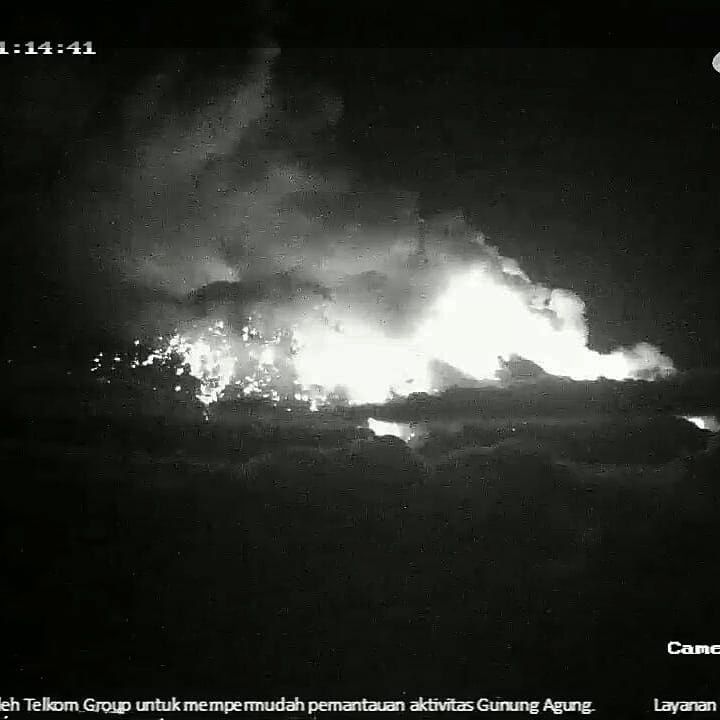 Our friend Thierry Sluys, living in Tulamben, had only a few minutes to evacuate his hotel, and to join on the road the inhabitants who were fleeing in the same direction.

He confided to me his impressions: "When I arrived on the parking lot, a dantesque spectacle. On this side of the volcano, it was red from top to bottom ! I took my rental car and ran to get out of the area. Until Ahmed, more than 15 km of road, I saw huge incandescent blocks that hurtled down the slopes. The dust raised by them made me think of pyroclastic flows foreheads. Fortunately it was not the case, but without any information, I was really worried.  "

The eruption lasted 7 minutes 21 seconds, with an amplitude of 24 mm on the seismogram, according to the PVMBG. The level of alert remains fixed at 3, with a prohibited area of ​​4 km radius. BNPB does not report casualties. Agung - two more photos of the fallout and the burning of the summit on 02.07.2018 - on the left, photo of kemal.arsjad / Twitter; right, photo by Ayu Cintya Laksmi / Facebook 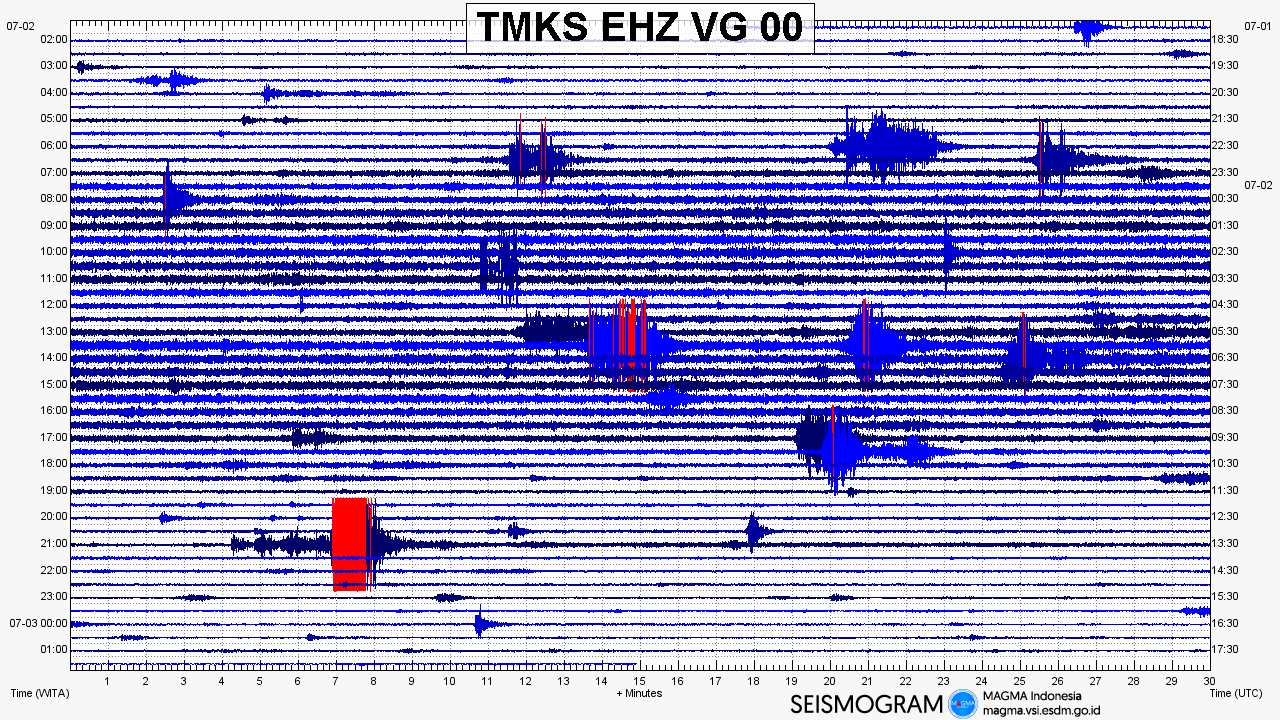 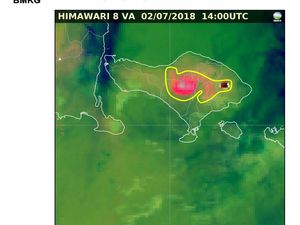 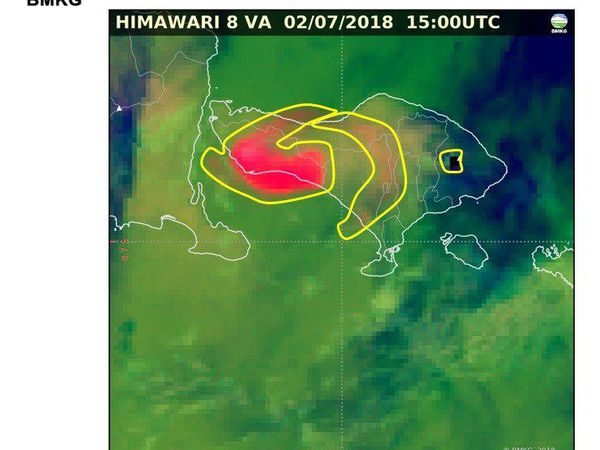 Agung - images of the ash cloud moving westward by the Himawari satellite, respectively at 21h, 21h30 and 22h WIB - a click to open the thumbnails. - Communication and photo by Thierry Sluys 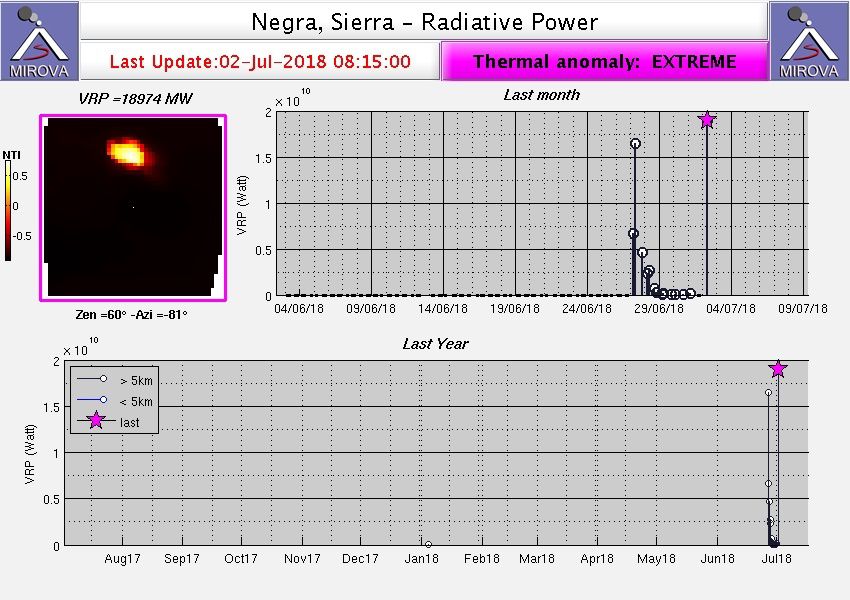 In Ecuador, the eruption of Sierra Negra is not over.

After a small earthquake on July 1, 2018 at 15:52 GMT, tremor appeared.
At 18 o'clock, the National Park staff reports incandescence and the presence of lava flows on the northwest flank of the volcano. The IGEPN informs, for the period from 01 to 11 am to 02 July at 11 am, 286 volcano-tectonic earthquakes, 43 LP earthquakes, 3 VLP earthquakes and emission tremor. An ash emission was mounted 1,000 meters above the crater, then headed west. 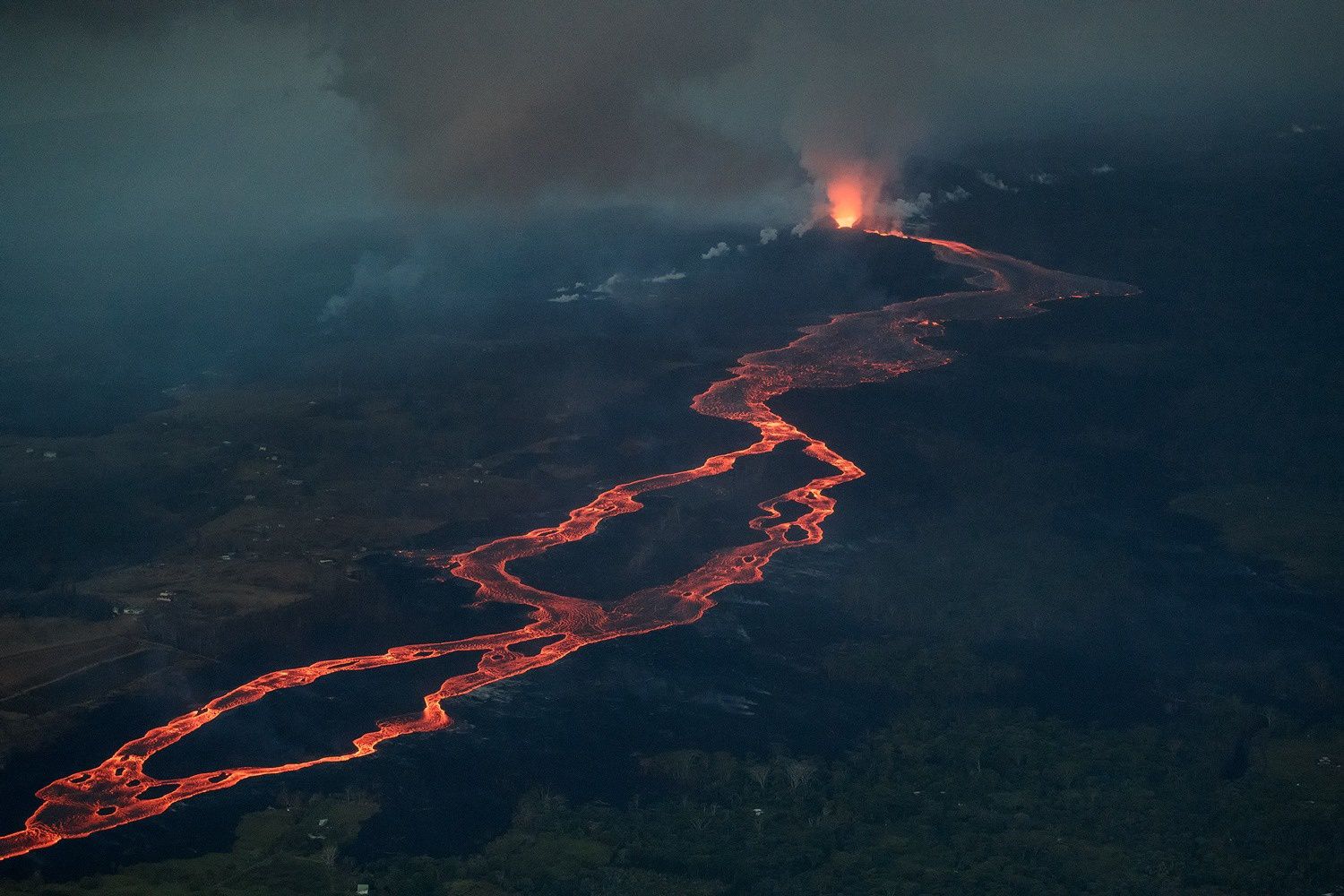 In Kilauea, the situation does not show any substantial changes this July 2.

However, note the large volume of lava produced by the fissure 8, which fills the capacity of the perched channel, and causes a series of small overflows.

The lava threatens the few houses still intact in the northern zone of its arrival at sea. A collapse explosion occurred at the summit at 1:24 HST; the radar images show a low ash-poor plume with energy equivalent to an earthquake of M 5.3.