Towards a 4th eruption this year at La Fournaise ? - photo © Bernard Duyck archives 2017

The seismic activity above the summit area of ​​the Piton de la Fournaise resumed significantly this 26 july with 32 superficial volcano-tectonic earthquakes (<2 km deep) recorded between 04:00 and 16:00 local time, including 23 events between 12:00 and 13:00 local time.
This significant increase in seismicity follows a resumption of inflation (swelling) of the volcano observed since the end of the eruption of July 13, 2018, and synonymous with a deep recharge to magma and pressurization of the superficial magmatic reservoir.

The acceleration of the seismicity observed today shows that the pressurization of the reservoir accelerates and that the latter becomes weakened. Piton de La Fournaise - Illustration of the deformation over 2 months. Here are shown baselines (variation of distance between two GPS receivers) crossing the Piton de la Fournaise building, at the top (at the top), at the base of the terminal cone (in the middle) and in the far field (at the bottom ). A rise is synonymous with elongation and therefore swelling of the volcano; conversely, a decrease is synonymous with contraction and therefore deflation of the volcano. The periods colored in light pink correspond to eruptive periods. (© OVPF / IPGP)

On Ambae, after a few days of persistent emissions of ash and strong fallout, a hole in the activity made it possible to obtain this July 26 at 9:30 local a satellite image of the eruptive site. 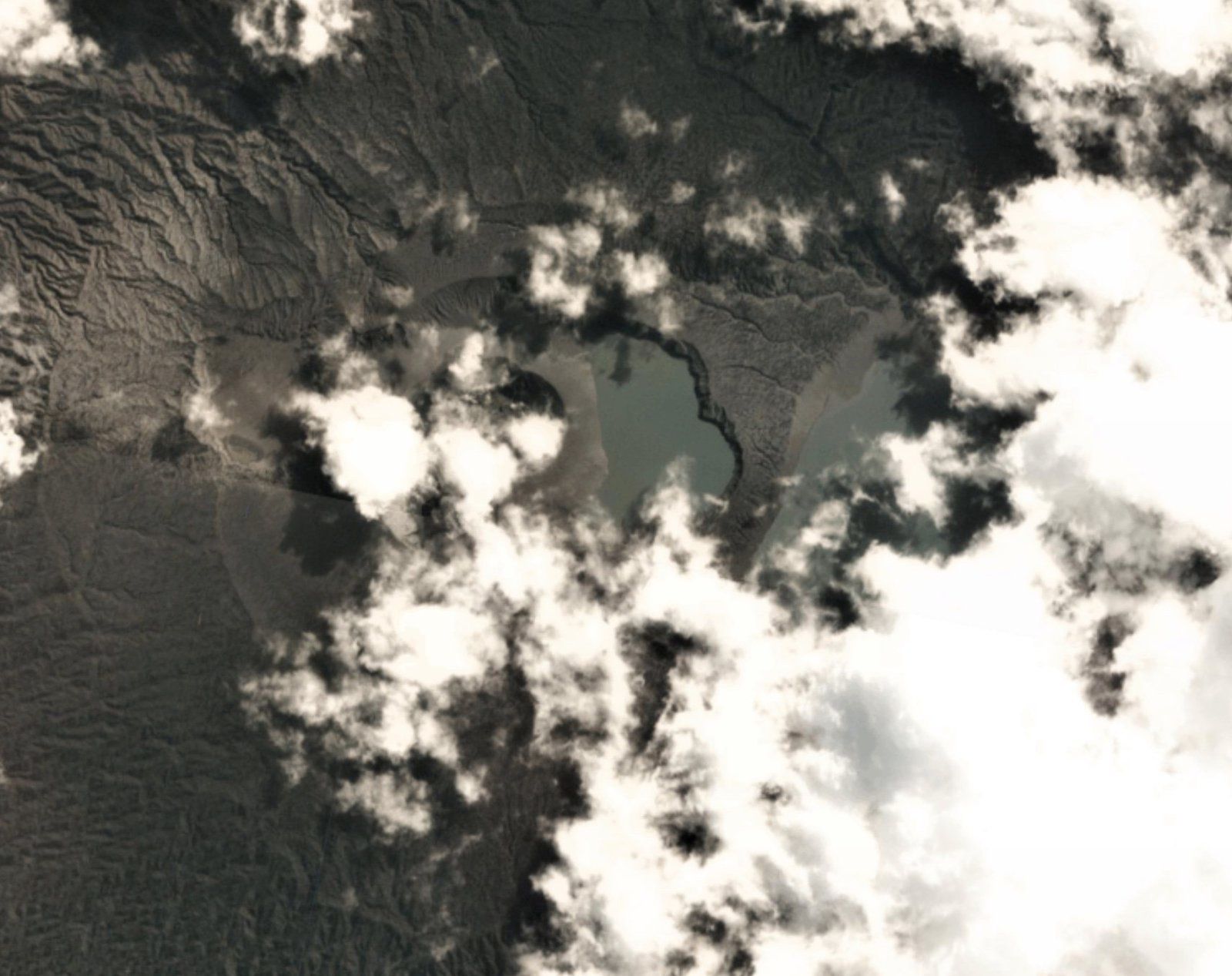 This did not last, since an explosive eruption was detected on July 26 around 21:00 local time, and confirmed by the VAAC Wellington.

Significant amounts of sulfur dioxide were recorded by the NASA and NOAA satellites, with a cloud of ash and gas in the east direction. 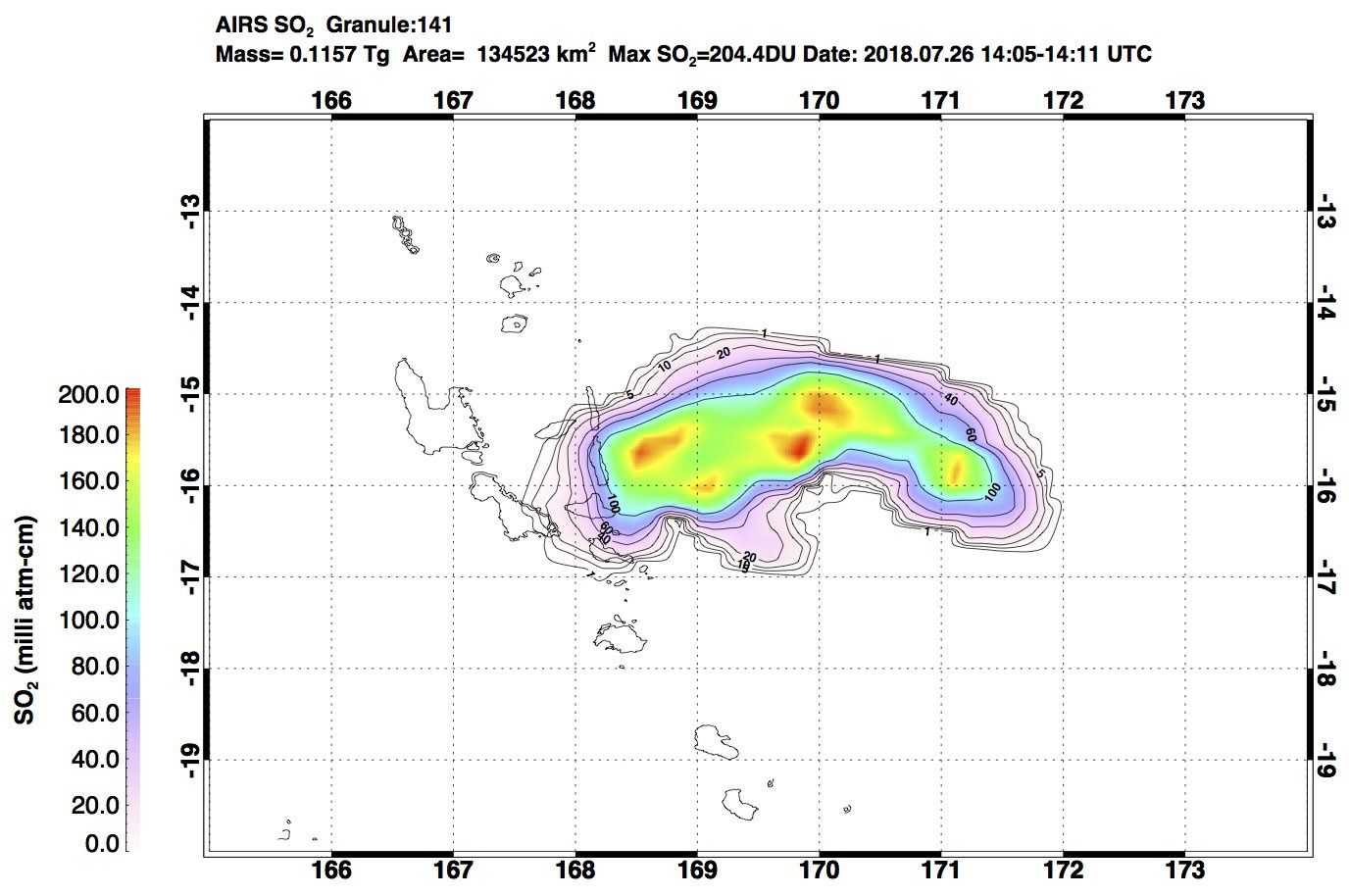 In the eastern rift zone of Kilauea, fissure 8 continues its lava emissions in the channel from the vent to the northeast. No further spillover was reported on the morning of July 26th. Lava movements in the channel appear slow, and levels are lower in the lower channel.

Note, the formation of a crust on the lava flow where she had formed a small lava pond.

On the coast, the lava flow in the Ahalanui region remains within 0,1 mile of the Pohoiki ramp in Isaac Hale Park. The active entrance to the ocean is still a few hundred meters east of this lava flow. At the top, the interior collapse of the edges and walls of Halema'uma'u continues.

The fractures, noticed between the terminals 28 and 32 on the Hihway 11, are attributed to the fact that its construction was made over many faults and lava tunnels. Due to the large amount of earthquakes in Kilauea the embankment in frequently repaired areas is shaken in the depths of the tubes and cracks. This explanation from the USGS is why there has been so much damage to the highway in this section. 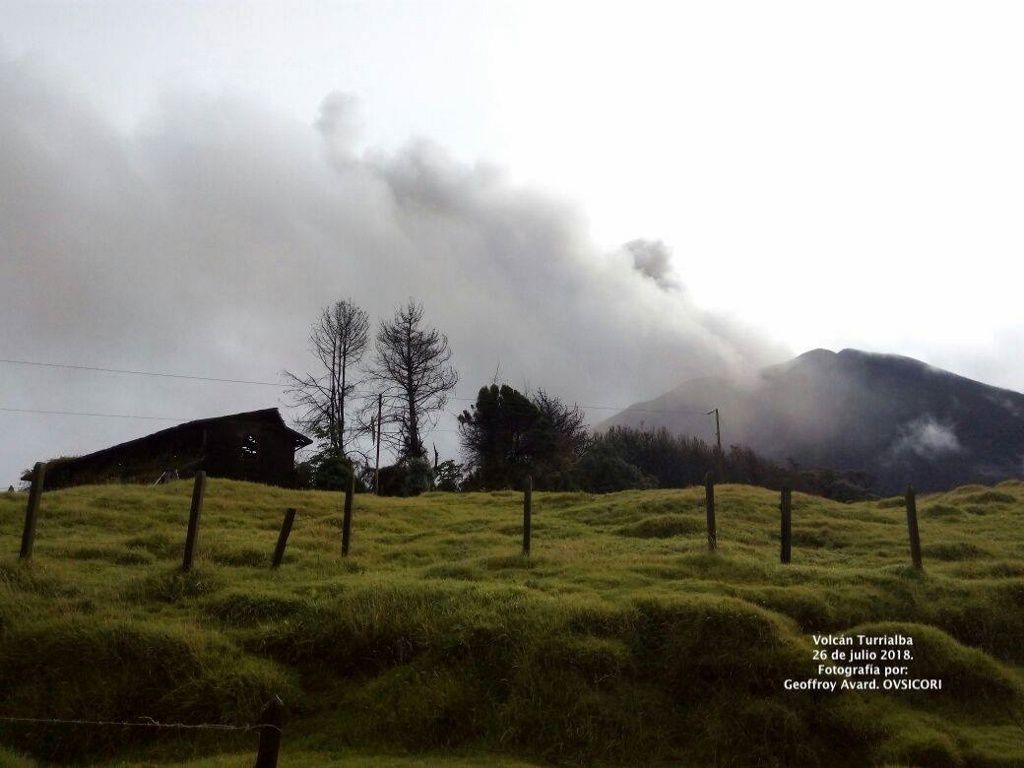 In Turrialba / Costa Rica, the volcano maintains intermittent passive eruptions of ash since 23 July 2018; they disperse west-northwest towards the Central Valley.