News from Ambae, Agung and Kilauea 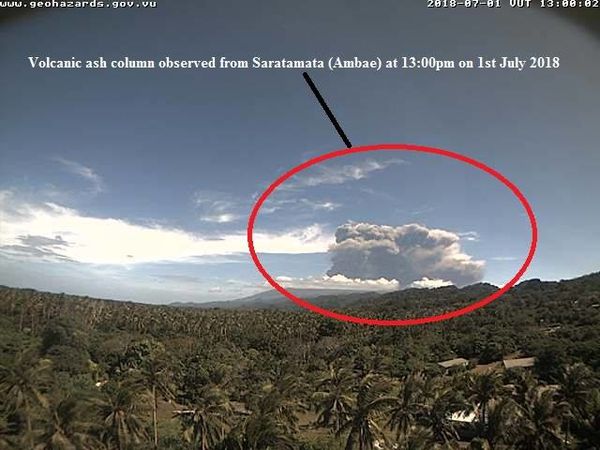 In Vanuatu, on the island of Ambae, the volcano of Lake Voui has a strong ash emission this 1st of July 2018 at 13h.

Ash fell on a western sector; the ash cloud has been spotted at various altitudes towards Espiritu Santo, the neighboring island.

This acyivity remains in alert level 2 standards, with a safety zone of 2 km radius around the active vent. 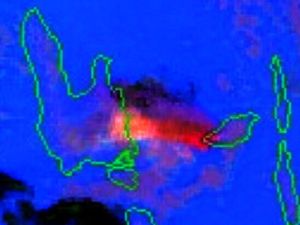 The Agung remains under surveillance!

From 27 June to 2 July 2018 at 09:00 WITA, the height of the eruptive column (gas and ash) tended to decrease but not significantly from 2500 m above the summit to 200-2000 m above the summit. At night and early in the morning, the glow above the crater is still observed.

This indicates the presence of fresh lava materials with high temperatures in the crater and always the movement of magma on the surface.

Inflation, on the order of one centimeter from June 28 to July 2, has dropped slightly, but the system remains under tension, indicating magma pressure. 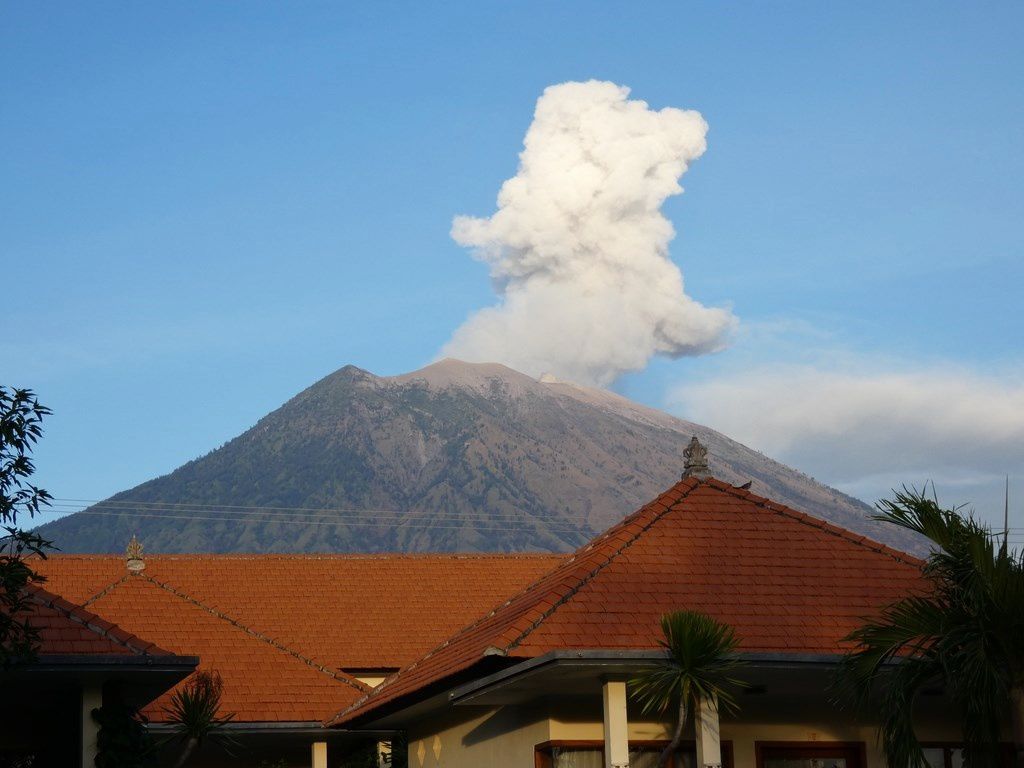 Hot spots corresponding to the effusive activity are noticed by the satellites, and the thermal energy went from a maximum of 819 MW to 58 MW at the last measurement.

Source: PVMBG, Magma Indonesia, and thanks to Thierry Sluys for sharing photos. 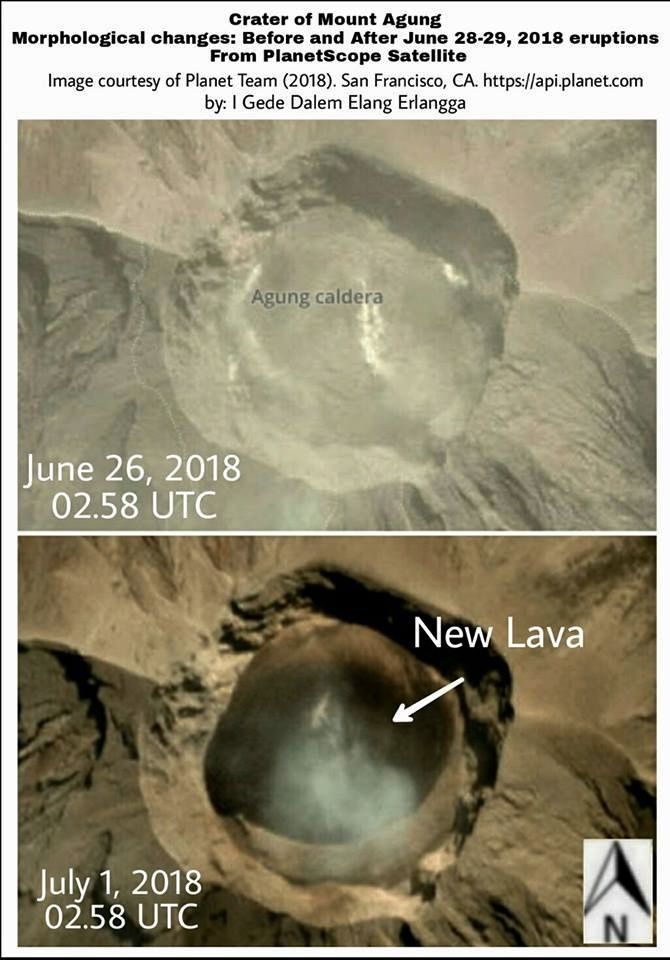 Agung - morphological changes between 28-29.06 and 01.07.2018 - the new pancake is a little out of the way and does not cover all the old - images Planet team sat. via I Gede Dalem Elang Ellangga The eruption continues in the eastern rift zone of Kilauea, where fissure 8 continues to emit lava flows.

Lava flows are coming from the spatter cone, 55 meters high at its highest point, and where fountains rarely exceed this point.

The fissure 22 emits spatters 50-80 meters above the small cone, and feeds a short flow slowly advancing to the northeast.

The lava front at the entrance to the sea at Kapoho has expanded in recent days ... lava enters the ocean mainly in the northern part of the new delta. A huge lava inlet is located between Kapoho bay and the former Vacationland subdivision. 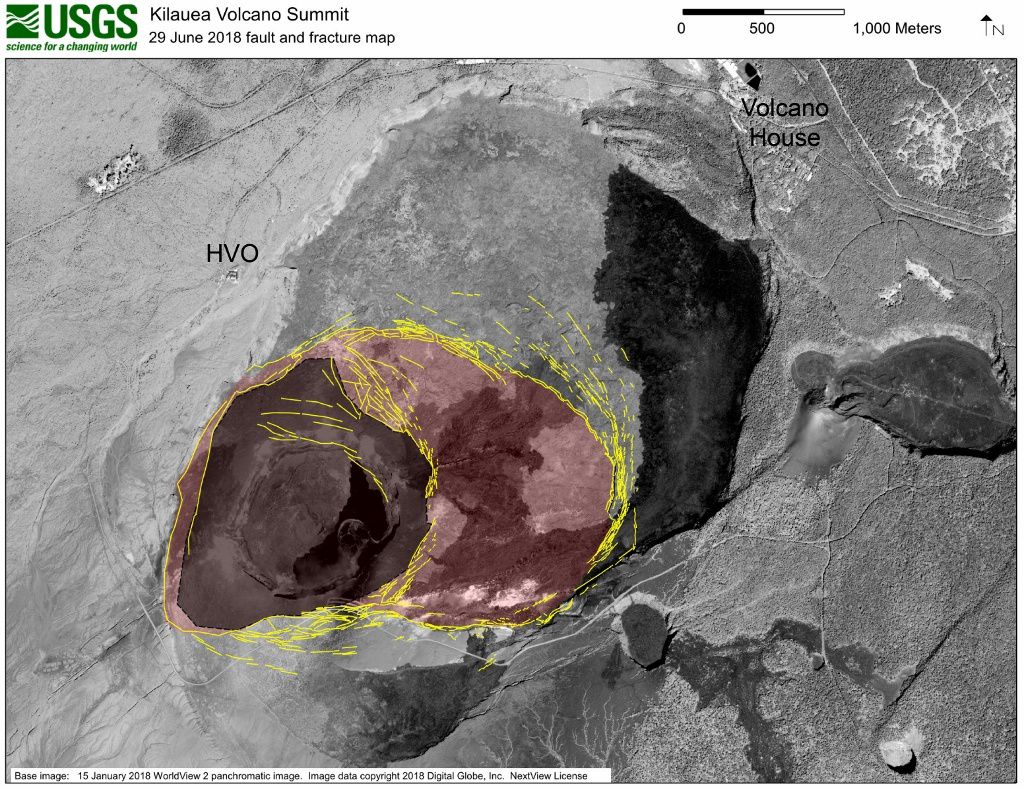 Kilauea summit : High-resolution satellite data are useful for mapping cracks and deformation in the summit caldera at Kīlauea Volcano. This map shows major fractures in yellow (as of June 29) on a base image acquired by the WorldView-2 satellite before the current sequence of events began at Kīlauea. The area of major subsidence has expanded east and south, and slightly west, of the main Halema‘uma‘u crater area. The large, red-shaded area east of Halema‘uma‘u is moving down within a scarp-bounded area, as seen in recent photographs of the summit. Some fractures have also formed to the east-northeast of the red-shaded area of accelerated motion, and also on the south caldera rim where parts of the caldera wall have slumped into the rapidly moving caldera floor below. The dark gray-shaded area within the red shaded area shows the region of most significant down dropping and is currently the deepest part of Kīlauea caldera. - USGS