Piton de La Fournaise - disappearance of the Rosemont Chapel (red circle) under the lava of the flows - photo 13.07.2018 © Brieuc Coessens

Following the end of the eruption on July 13 at 22:00, strong seismic activity is still recorded at Piton de La Fournaise.
Since the end of the eruption and until 15:30 this day (July 14), 51 superficial volcano-tectonic earthquakes (<2 km below the surface) have been recorded, an average of about 3 events per hour. The majority of these earthquakes are located under the northern edge of the crater Dolomieu. This shows that the feeding system of the deep volcano remains under pressure.
No significant deformities were observed today.

The OVPF survey this morning made it possible to map all the lava flows emitted during the July 13 eruption (Figure 1) and to estimate its volume at around 0.3 million m3. These flows covered approximately 400 m of markers on the hiking trail leading to the summit. Piton de la Fournaise 14.07.2018 - cartography of lava flows emitted during the July 13, 2018 eruption made from aerial images processed by stereophotogrammetry. - In yellow, the hiking trail, cut by the lava flows - white lines - emitted by the 4 cracks - red lines - Doc OVPF

The Agung has twice erupted this morning: 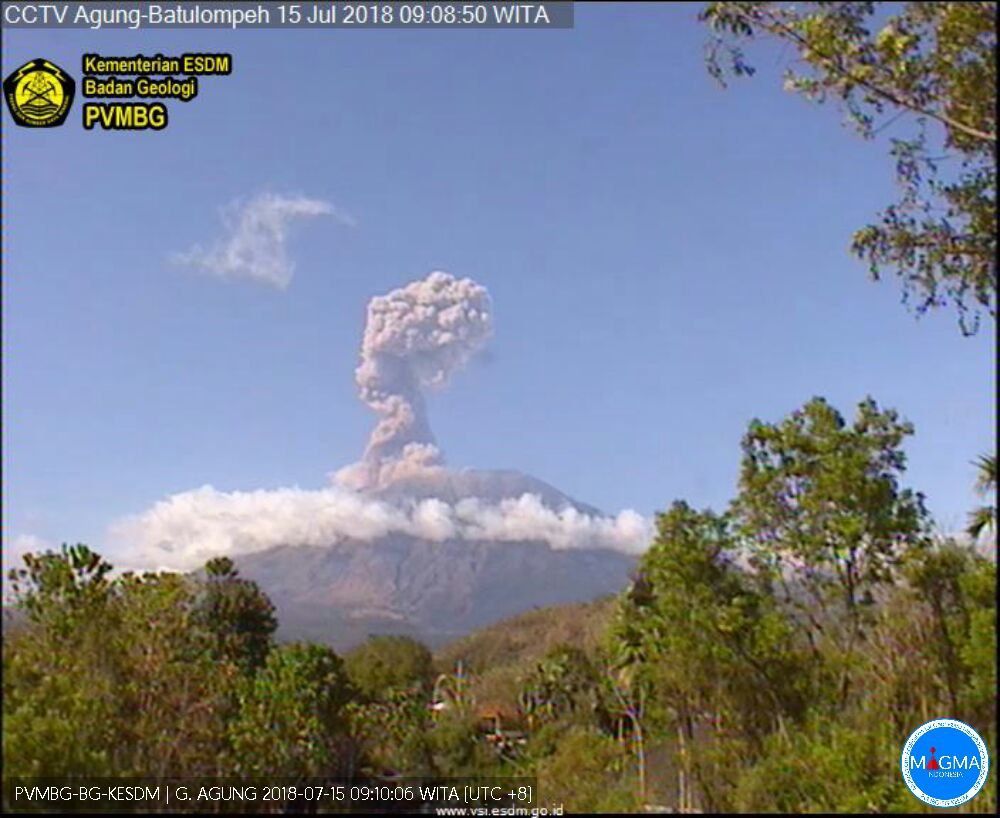 In the eastern rift zone of Kilauea, fissure 8 continues to dump its lava into the perched channel to the northeast; levels in the upper channel increased for several hours after the summit meltdown on July 13 at 19:08, then returned to lower levels early in the afternoon. A small overflow is reported near the vent.

At its entrances to the sea, the south of the lava front is located on July 14 in the morning at 1 km from Isaac Hale Park, while on the 6 km of the sea front, the lava oozes in various places. The IMO changed the status of Öraefajökull on 13 July. This volcano shows clear signs of instability, coupled with a phase of inflation for a year and a half, reflected by an increase in seismic activity and deformation, which are persistent.
The probable cause of this inflation is one injection of new magma, with an estimated volume of about 10 million m³, a volume comparable to the intrusion under the Eyjafjalajökull before the eruption of 2010.

Despite a drop in geothermal activity since the end of December, new resistivity measurements indicate the presence of altered rocks at superficial levels within the caldera due to high temperatures.

- an increase in geothermal activity with associated floods and gas emissions.

- an evolution towards a pre-eruptive stage, without being able to specify its evolution in the time, nor the time of the eruption.

Civil Protection and scientists briefed local people, and an evacuation plan was prepared. The monitoring of the volcano is reinforced. Öraefajökull - map of points and boundaries of the evacuation zone - Doc.IMO