Since the beginning of July, inflation (swelling) of the Piton de la Fournaise volcano has been observed again by the OVPF deformation network.
Thus since July 1st a 0.5-1 cm elongation of the summit zone and a 0.5-1.2 cm elongation of the base of the terminal cone are recorded. Piton de La Fournaise - Since the beginning of July, an inflation of the building of Piton de la Fournaise is again observed - Doc.OVPF 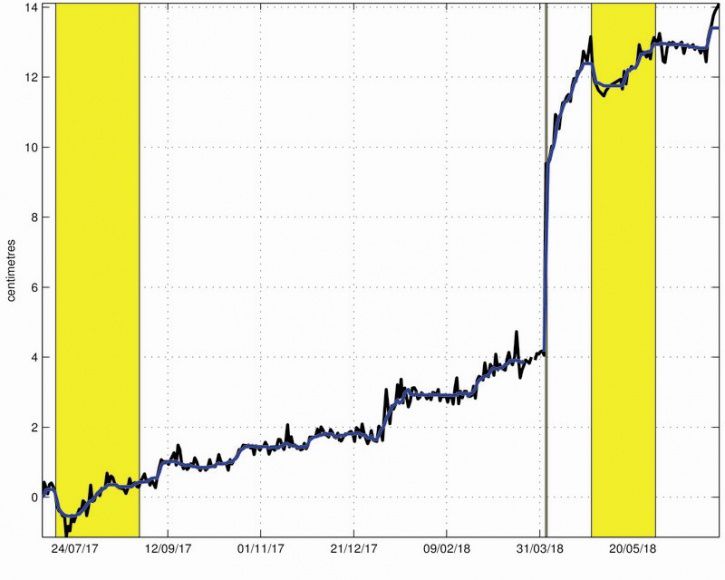 Piton de La Fournaise - Illustration of the deformation during the last twelve months (the eruptions of July 14-August 28, 2017, April 3-4, 2018 and April 27-June 1, 2018 are shown in yellow). Here is shown a baseline (distance between two GPS receivers) crossing the terminal cone from north to south (in black the raw data, in blue the data smoothed over a week). A rise is synonymous with elongation and therefore swelling of the volcano; conversely, a decrease is synonymous with contraction and therefore deflation of the volcano. (© OVPF / IPGP)

This recovery in the inflation of the building is synonymous with a pressurization of the superficial magmatic reservoir by a deep recharge in magma. The high CO2 concentrations in the far-field soil (Plaine des Cafres and Plaine des Palmistes areas), which have been maintained since the end of the eruption on June 1st, are in agreement with a deep rise of magma.

The change in trend observed in the deformations of the building (resumption of inflation) since July 1st attests to a possible transfer to lower depths (superficial reservoir). Note that for the eruption of April 27 - June 1, 2018, this phase of pressurization lasted about three weeks (April 4-27, 2018) before the tank roof became fragile and broke, giving rise to a magma injection to the surface and a rash.

At Kilauea, the lava flow from fissure 8 is increasing at the north end of the front flow due to the blockage of the tunnel system, and an overflow of the channeled flow near the Kapoho crater. Lava continues to progress in Kapoho Ag Lots and Kapoho Beach Lots.

On the other hand, activity in the south has subsided, leaving Ahalanui Hot Pond and Kua o Ka La Charter school to rest.

Between these areas, lava enter still at sea in many places generating laze plume. Peel hair and other light vitreous fragments produced by the fountains of fissure 8 continue to fall in the leeward areas.

Spattering on the fissure 22 feeds a weak lava flow towards the east. 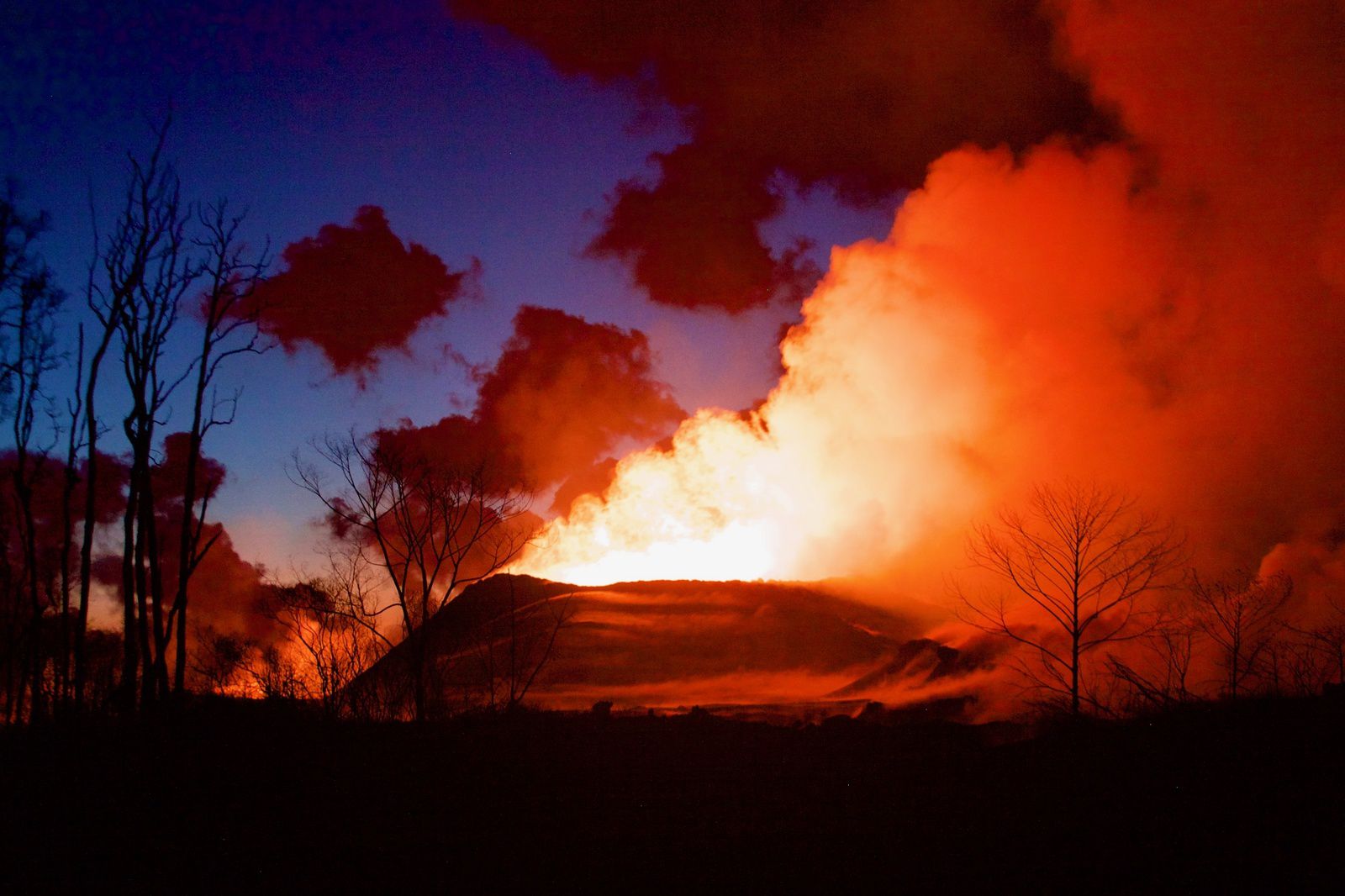 At the summit, an episode of explosive collapse occurred on July 6 at 18:04, with a developed energy equivalent to that of an earthquake of M 5,3. In Peru, the OVI officially launches a research project of recurrence periods and triggers processes of recent explosive eruptions of the Misti and Chachani volcanoes, and their implications in the prevention of volcanic risk in Arequipa.

In southern Peru, the recent eruptions of the Ubinas volcano in 2006-2009 and 2013-2016, and Sabancaya (2016-2018) generated a very negative economic and social impact in the villages nearby, which motivated the specialists of The INGEMMET Volcanological Observatory (OVI) has decided to launch the investigation of the Misti and Chachani volcanoes, close to the city of Arequipa, which has a vulnerable population of more than one million inhabitants. 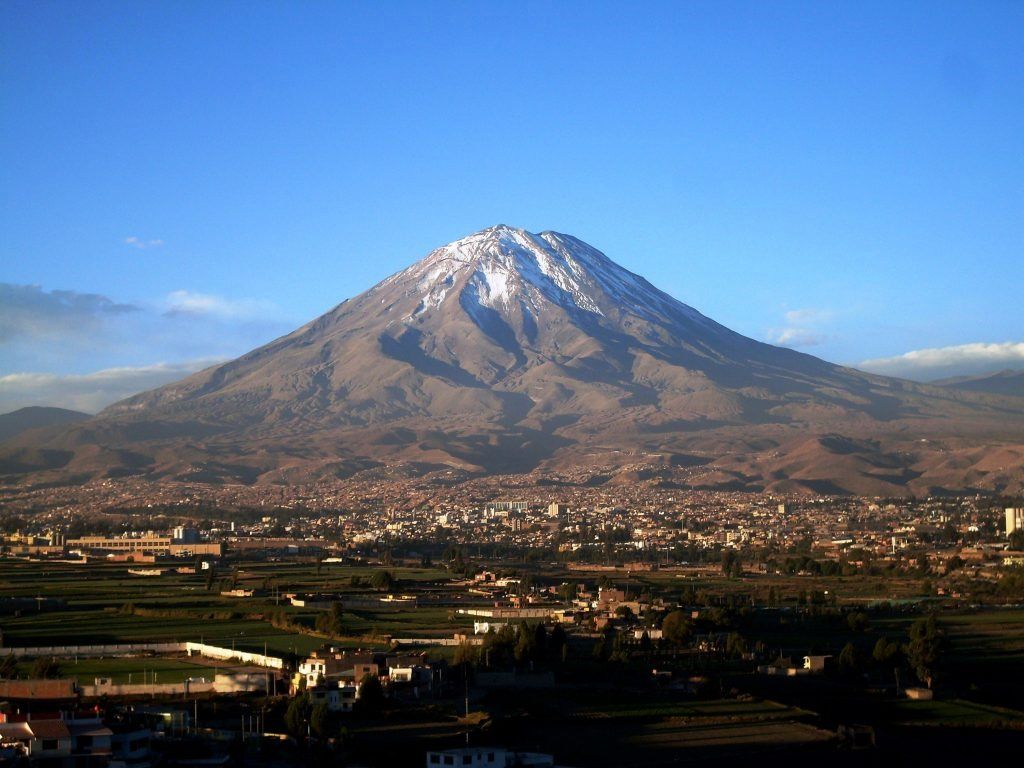 It will clarify the past activity of the Misti and Chachani volcanoes and determine the number and size of eruptions, the volume of ash emitted, the areas covered by volcanic materials, etc.

In addition, the Chachani Volcano Hazard Map will be conducted to enable the authorities to implement an appropriate land use plan and not expose people to a potential hazard. The Misti is a symmetrical andesitic stratovolcano dominating the city of Arequipa in Peru; its last eruption took place officially in July 1985.

The Nevado de Chachani Volcanic Complex, of andesito-dacitic nature, consists of a group of 320 km² consisting of lava domes, a complex stratovolcano and a shield on the flank.