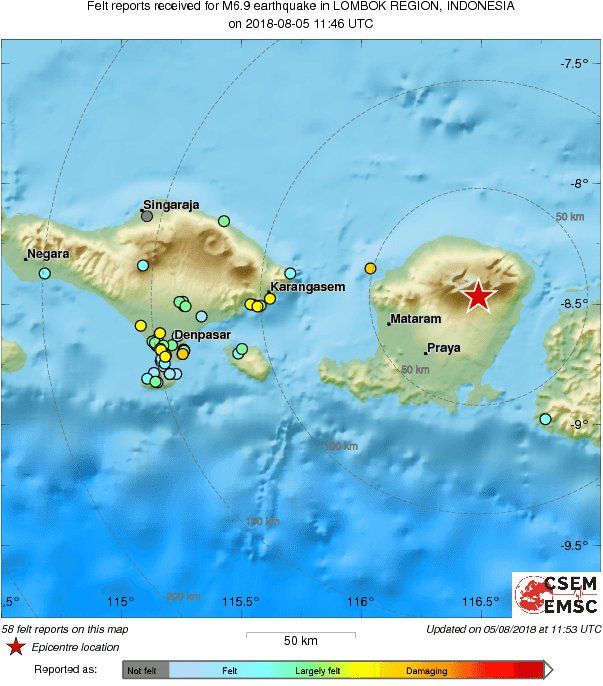 A new and important earthquake hit Lombok Island on August 5th at 18:46 WIB (UTC +7), followed by many aftershocks.

It has occurred in an area composed of decomposed, loose and non compact volcanic deposits, which enhances the effect of vibrations and renders the rocks vulnerable to seismic shocks.

On the basis of its position and its depth, the source of the earthquake is associated with the fault upstream of the back arch of Flores. The latest news is that it has killed 91 people and wounded more than 200 people.

Various buildings were damaged in Mataran, as well as most of the earthen constructions north of Lombok.

It was strongly felt in Bali, where there is minor damage at Ngurah Rai Airport, and hospitals in Karangasem, and as far as Malang in Java, and Waingapu in East Nusa Tenggara.

Lombok and Bali airports resumed operations after a brief stop. In Krakatau, activity remains strong. The volcano is overcome during the day with a gray plume of 200 meters high. An explosive activity illuminates the summit in the night, causing incandescent fallout on the sides of the cone.

The seismicity is marked by a continuous tremor of dominant 45 mm.

The activity level remains at 2 / waspada, with a 2 km radius prohibited area, and an orange VONA 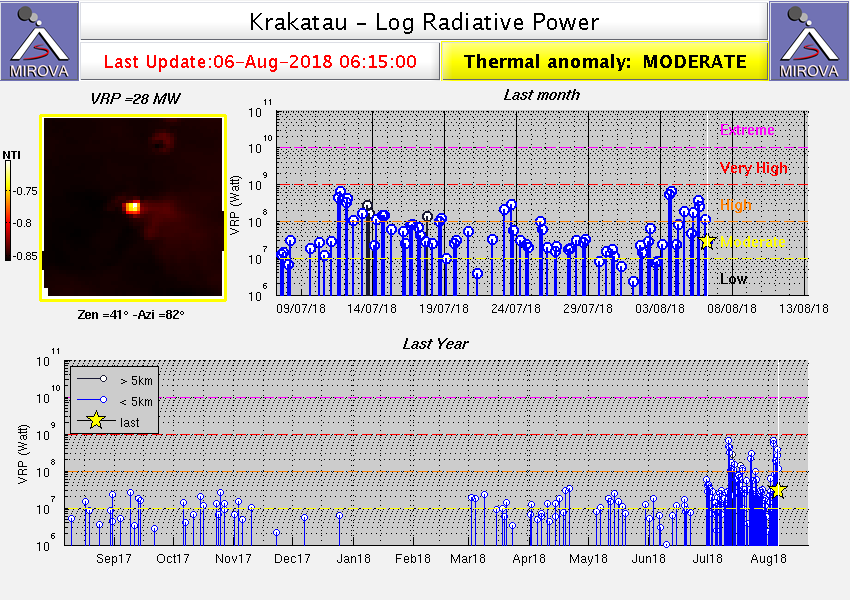 In Kilauea, the level of eruption has dropped sharply since Saturday; on the morning of August 5, an overflight shows the lava confined within the cone on fissure 8, and slowly advancing towards the breach in the direction of the flow.

The surface of the lava flow was encrusted, with visible incandescence at the cracks. The conversion into a more viscous casting makes the flow lazy, though still active.

Towards the ocean, lava reoccupied the channel east of Kapoho Crater. Despite a smaller volume, the number of streams entering the sea stretches from Ahalanui to Pohoiki, and the lava reached the surf spot of Dead Tress Kilauea East rift zone - fluctuations of the lava within the cone on fissure 8 on the morning of 05.08.2018 - above, USGS photo - below, photo Bruce Omori Kilauea East rift zone - photos comparing the previous activity and that of 05.08.2018 on the cone and the upper part of the flow of the fissure 8 - Doc Brad Lewis via Hawaii Tracker The ice breakup on the Skaftá River is still in progress: the discharge has been decreasing since midnight on August 5 in Sveinstindur, but the levels are increasing near Eldvatn and the waters inundate the Eldhraun lava field. A smell of sulfur is perceptible in a large area south of the island. Skafta river - archive footage of the Jökulhlaup 2015, in the absence of recent photos - photo RAX