News of Etna, Rinjani, Krakatau, Kilauea and Jökulhlaup on the Skafta river The activity at Etna concerned yesterday and the day before yesterday three craters: the Bocca Nuova, the crater northeast (NEC), and the crater southeast (SEC).

The SEC emitted ash puffs at the "puttusiddu", and on August 3 at dawn, the eastern pit of the new southeastern crater was the site of an explosion.

The rise is progressive In Indonesia, the Rinjani volcano, which is closed to hikers since the strong earthquake, is still home to many aftershocks; the BNPB recorded 564 replicas on 04.08.2018.

An earthquake of magnitude 4.8 on August 4 at 13:44 WITA is responsible for falling rocks and landslides. In Krakatau, seismicity on August 3 is characterized by 227 eruptions earthquakes , 49 emission earthquakes, and a continuous tremor of dominant amplitude at 40 mm.

Eruptive plumes are emitted at a height between 100 and 200 meters. The explosions are loud and heard in Serang and Lampung. 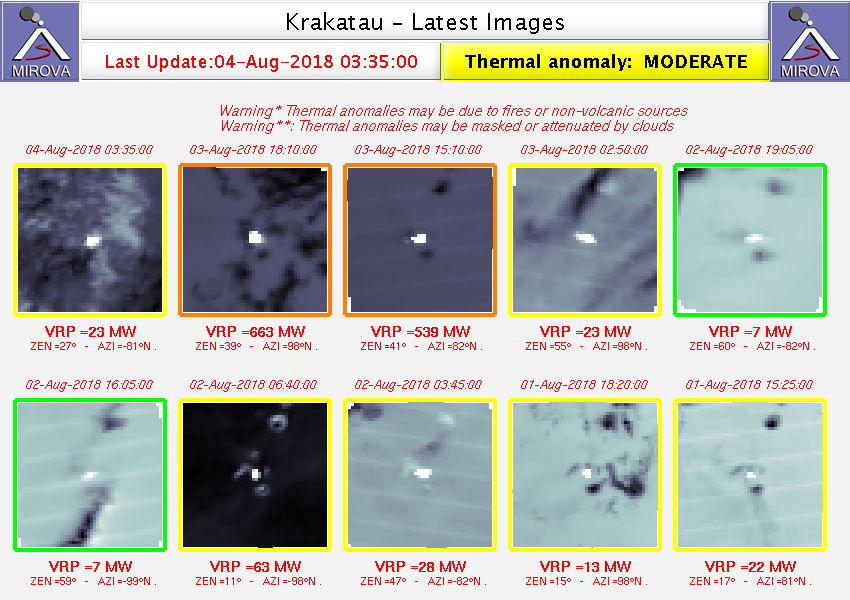 In the East Rift Zone of Kilauea, various vegetation fires were caused by overflows of the lava flow from fissure 8 near Noni Farms eoad and southwest of the crater Kapoho.

In Iceland, the jökulhlaup started on the Skaftá River : water levels are increasing, measured at the moment at 1.105 m³ / sec.

The debacle is expected this Saturday at the beginning of the day on the upper course of the river; police closed roads in the highlands near Skaftá.

The IMO also reports the flow of geothermal water in the Múlakvísl from the Mýrdalsjökull glacier cover. Areas near the river are to be avoided due to gas pollution. Iceland - the situation is, according to IMO, similar to that of Jökulhlaup on the Skaftá river in 2015 - photo RAX / Ragnar Axelsson