The eruption started a month ago at Piton de La Fournaise continues. The intensity of the volcanic tremor (indicator of eruptive intensity at the surface) is still very slightly decreasing.
Gas pistons  ("gas flushes" or "tremor puffs") at the eruptive site are always recorded by the OVPF seismometers. Piton de la Fournaise - Evolution of the RSAM (indicator of the volcanic tremor and the intensity of the eruption) between 04h00 (00h UTC) on September 15th and 12h30 (08h30 UTC) on October 14th on the seismic station FOR, located nearby Castle Fort crater (2000 m altitude on the southeast flank of the terminal cone). (© OVPF / IPGP) A field reconnaissance was completed today. In the maintenance program and repairs of measuring stations, and samples of lava at 600m from the front of the casting.
Most of the activity is still conducted in lava tunnels, no major channel was observed and only small and rare resurgences were visible. No projections were observed at the eruptive cone and the level of the lava lake inside the vent was relatively low. A strong degassing was still present at the level of the vent as well as at the level of the main lava tunnel located just downstream

Many visitors have waited until the lava flows are visible since the Grand Brûlé, but today it is a huge disappointment that its flows on the heights of the big slopes have frozen.Il should surely a new rise of the flow of lava or a new eruption lower to see this magnificent show. An image of the Sentinel 2 satellite of October 14 shows, thanks to the filters used, a hot spot in the active cone and another at the casting front, near the rampart

The flow front has not evolved since the last sightings and was this morning still 500m from the Great Slopes, the latter was completely frozen. On 14 October, the Etna seismic network recorded an increase in the level of the volcanic tremor and seismic signals from the INGV-OE station.

The weather conditions did not allow to have a vision on the current activity.

On the morning of October 15th, the images of the LAVE webcam allow to see fumaroles under the summit, probably in connection with a small lava flow.

Correction: The steam seen on the LAVE webcam was not due to a new lava flow, but well produced by the rain falling on an old lava flow lane cooling (thanks to Pippo Scarpinati for this clarification) The Sangeang Api, which forms a small island 13 km wide in the Lesser Sunda islands, off Sumbawa, is in episodic activity.

Beautiful photos of his Strombolian activity between 28th and 30th September have just been put on line on the page Volcanoes and volcanism / Facebook by Martin Rietze ... superb as always! 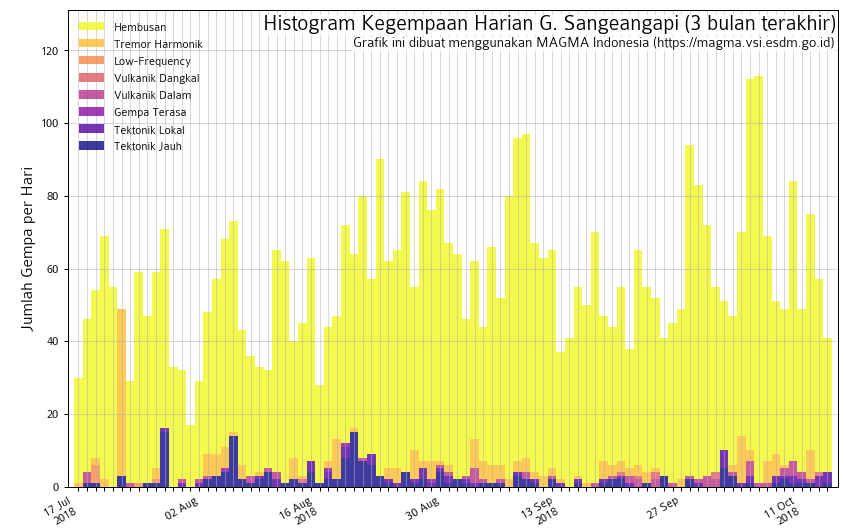