In the western Aleutian arc, the alert level and aviation code of the Semisopochnoi were increased to watch and orange following an eruption that began on October 26, 2018 at 4:47 UTC / 20:47 AKDT. A strong tremor was recorded and a small cloud of ash observed by satellite at about 3.600 m asl. At Piton de La Fournaise, the eruption started on September 15th at 4:25 am local time continues. The intensity of the volcanic tremor (indicator of eruptive intensity at the surface) has stabilized for about 24 hours, at a very low level. 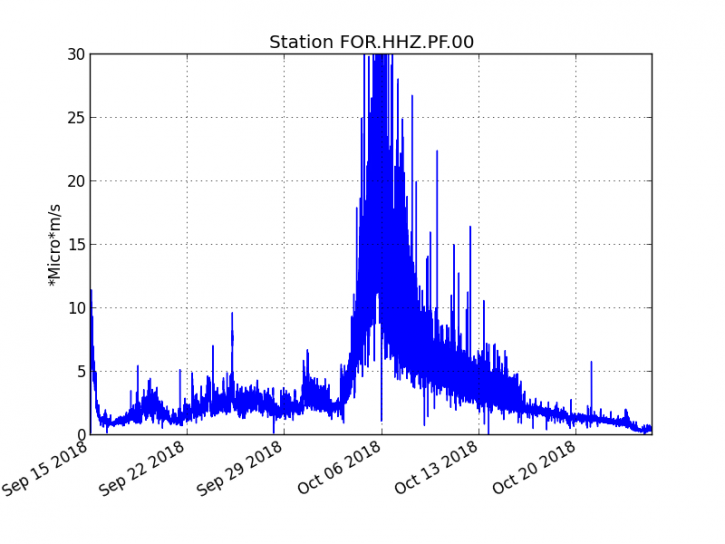 Piton de la Fournaise - Evolution of the RSAM (indicator of the volcanic tremor and the intensity of the eruption) between 04h00 (00h UTC) on September 15th and 15h34 (11h34 UTC) on October 25th on the seismic station FOR, located nearby Château Fort crater (2000 m altitude on the southeast flank of the terminal cone) (© OVPF / IPGP).

An outline of the flow could be determined by the OI2 platform (OPGC - Clermont Auvergne University) from the Sentinel 1 satellite data acquired on October 24th. This new contour does not show (or very little) evolution of the flows and their fronts.

Source: OVPF - Find all the information related to the activity of Piton de la Fournaise on the website (http://www.ipgp.fr/en/ovpf/actualites-ovpf), the Twitter account (https: //twitter.com/obsfournaise?lang=en), and the facebook account (https://www.facebook.com/ObsVolcanoPitonFournaise/) of the OVPF-IPGP.
The information in this document may not be used without explicit reference.

The effusive eruption continues on Barren island. An image of the Sentinel 2 satellite of 23 October shows the active lava flow to the north-west of the cone and significant degassing at the upper vent and lesser at the peripheral level, where the flow is likely to reach the ocean.

IMO scientists confirm that Öræfajökull is still active after a dormancy period of more than 250 years (flank eruption in 1727). The Öræfajökull from the ring road- photo © Bernard Duyck

The seismic activity has increased over the last year, and does not show signs of decline. The deformation measurements show a magmatic recharge at a depth of only 5 km below the caldera, from a deep source , and that puts all under pressure ... Kristín Jónsdóttir, group leader of the IMO declared in a meeting with the inhabitants of the area of ​​Hof that the volcano prepares an eruption .

When and how ? The difficulty remains to fix the mode of evolution of the Öræfajökull, towards an eruption, or towards an increase of its geothermal activity, and that of a delay, in term of months, or years.

IMO keeps him under close surveillance.