News of La Fournaise, Lengai and discovery of a chain of seamounts.

Since October 3, the OVPF is still recording signals of two trends that occur at different levels at Piton de La Fournaise:

1) at the level of the eruptive vent: records of "pistons gas", and weak surface activity, most of the activity taking place in lava tunnels with a resurgence on 8 October in the morning, feeding an active channel on the last third of the north face of the flow;

Given these two observables, no assumption is excluded as to the continuation of this eruption in the coming days (shutdown, re-intensification of activity on the same site, opening of new cracks, especially further downstream). Piton de la Fournaise - Evolution of the RSAM (indicator of the volcanic tremor and the intensity of the eruption) between 04h00 (00h UTC) on September 15th and 16h00 (12h00 UTC) on October 8th on the FOR seismic station, located nearby Castle Fort crater (2000 m altitude on the southeast flank of the terminal cone). (© OVPF / IPGP)

Observations made on 08.10.2018 from Bert Piton and from the air by OVPF teams have made it possible to locate the casting front. Since September 30, the northern front has progressed of 1.8 km and was, on October 8 at 08:00 local time, 500m of the great slopes, the southern and central fronts did not move. The north casting front was this morning less than 120 m from the southern wall of Enclos Fouqué. A detailed cartography could also be carried out by the service OI2 (University Clermont Auvergne) Scientists have discovered a chain of volcanic seamounts rising up to three kilometers from the seabed off the east coast of Tasmania, which is a food hub for marine life.

The underwater mountains, located nearly 2 km below the surface, have been mapped by the CSIRO Investigator Research Vessel, located 400 km from the coast.

Tara Martin, from CSIRO's mapping team, said some of the seamounts had steep summits, while others had large flat plateaus. 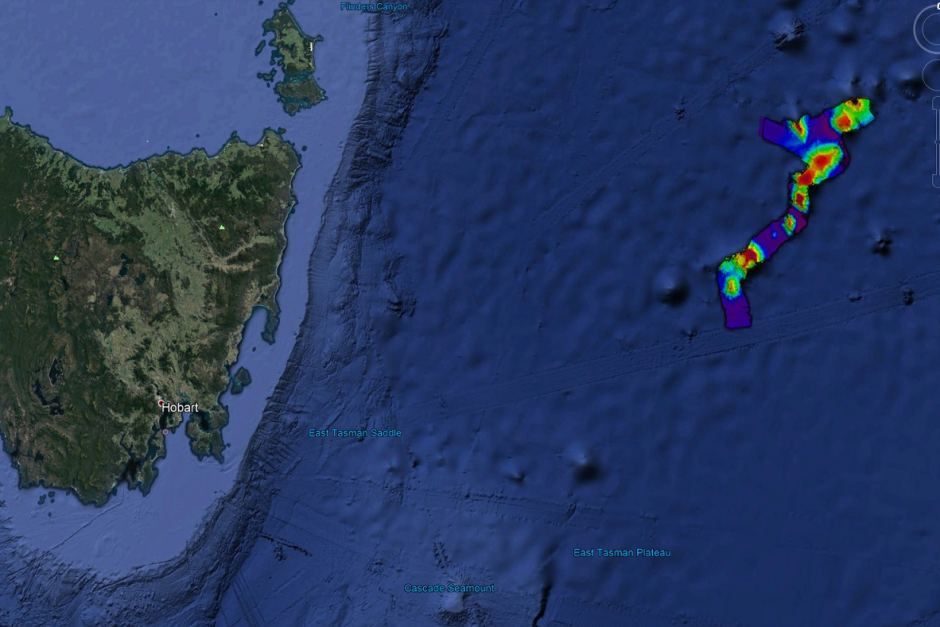 Location off Tasmania from the chain of seamounts - Doc. Google Earth, via ABC news Bathymetry revealing the morphology of seamounts off Tasmania - image CSIRO

"... these seamounts are linked to the break-up of Australia and Antarctica, which was about 30 million years ago " she said.

"While Australia, Antarctica, and Tasmania all separated, a big hotspot appeared under the earth's crust, fabricated these volcanoes, and then helped the earth's crust break so that all these regions could begin to separate ".

Seamounts offer a remarkable diversity of seabirds and marine mammals with an abundance far superior to that of Australian waters. We find on the chain of seamounts humpback whales and up to 80 pilot whales. News from Ol Doynio Lengai with this video of the only black lava volcano in the world.

Patrick Marcel and Régis Etienne climbed in August 2018 the sacred mountain of the Masai people. On this occasion, the use of the drone made it possible to see the state of evolution of the floor of the crater, rarely illustrated since its explosive activity of 2007, and to detail the walls, with a big hornito backed and active in june this year.

The level rises and the effusive activity is visible: the natrocarbonatite gushes out and forms a lake where it bubbles, and then forms flows. They will be superimposed and gradually raise the level of the crater floor to make it accessible again without much difficulty ... in a few decades presumably.