Eruptions of Ambrym, Soputan, and Veniaminof

Dec 16 2018 - A new fissure has opened up on Ambrym Island. Recorded by John Tasso

The Vanuatu Geohazards Observatory has raised the volcanic alert level of the Ambrym / Vanuatu volcano to 3 / minor eruption.

Observations and analysis of seismic data confirm a flank eruption in the caldera near the crater Marum this December 15 from 6am. The activity consists of lava flows and lava fountains, with emissions of gas and ash, visible and audible by the population of Ambrym and neighboring islands.

The security zone is 2 km around Benbow and 4 km around the Marum, including the three active lava lakes, where volcanic gases and ashes can be present in abundance. The villages north and northwest of Ambrym are particularly exposed. 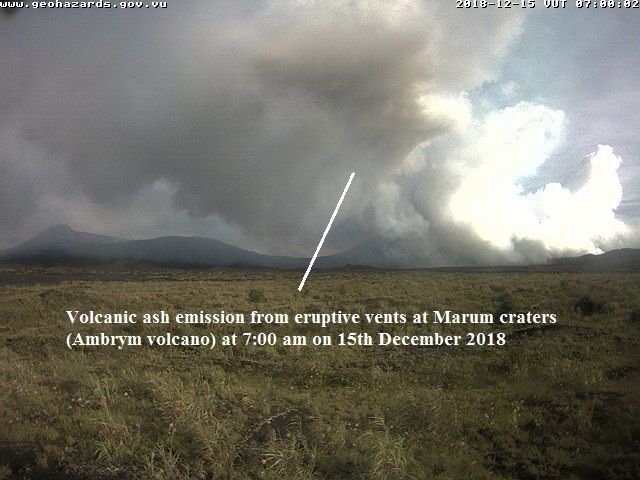 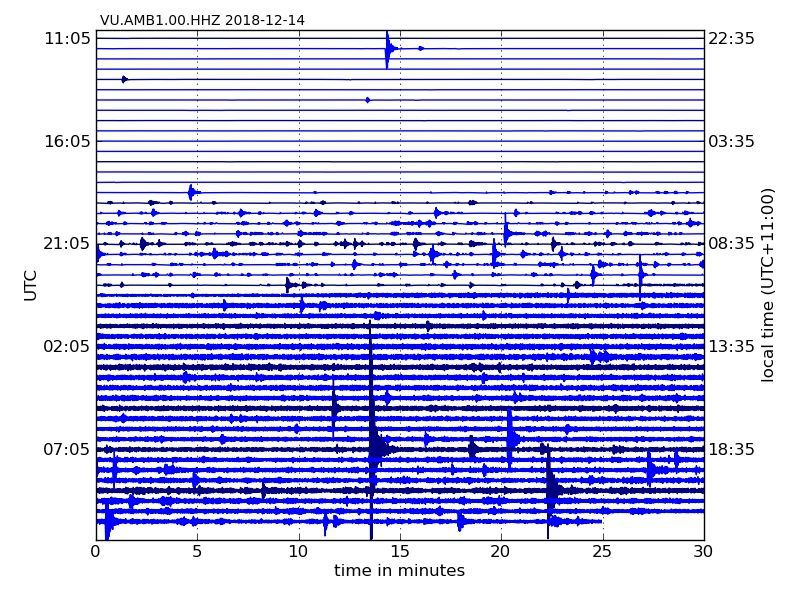 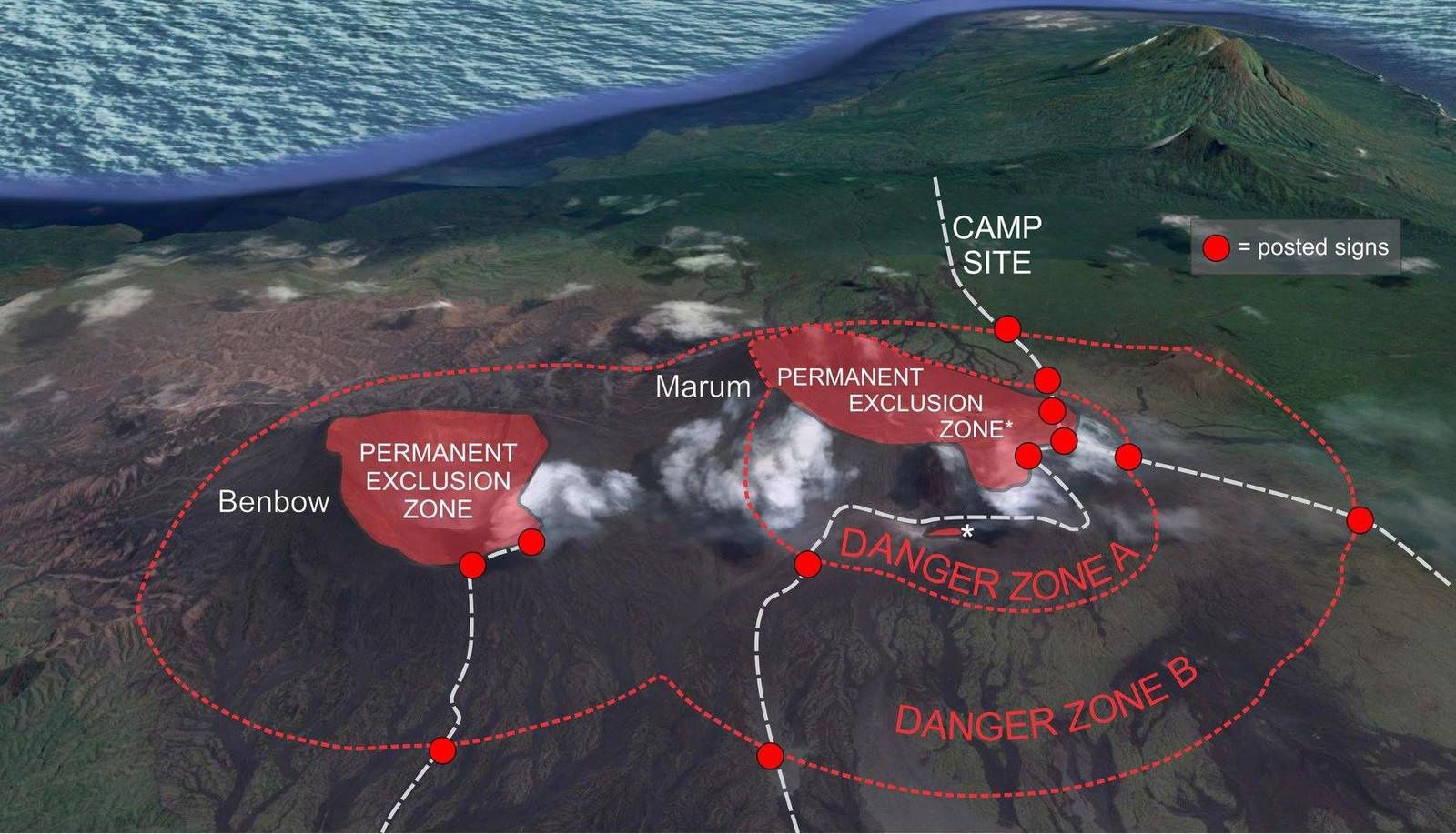 VAAC Wellington is issuing a notice of visible ashes and ashes falling as a result of a confirmed intermittent fissure eruption . The amounts of sulfur dioxide found by Sentinel 5P / Tropomi satellite are very high, over 600 Dobson units near the eruptive site (via Simon Carn) 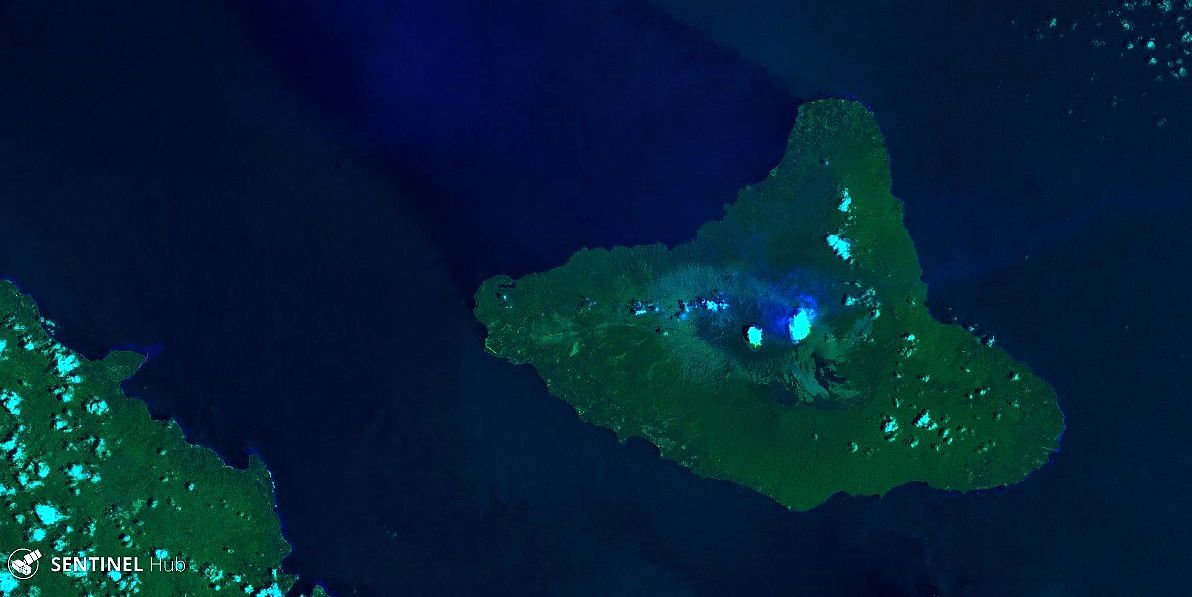 This Saturday, December 15, 2018 from 17:00 WITA, the seismic data of Soputan / North Sulawesi, indicate a rapid and significant increase. The seismicity continues to increase then and on Sunday, December 16, 2018 at 01:02, an earthquake occurs with a maximum amplitude of 40 mm (oversized) with a duration of 598 seconds, accompanied by thunderous sounds heard until the observation post of the volcano Soputan located in Silian Raya (about 10 km southwest of G. Soputan). The height of the eruption column is not observed because it is covered with fog. 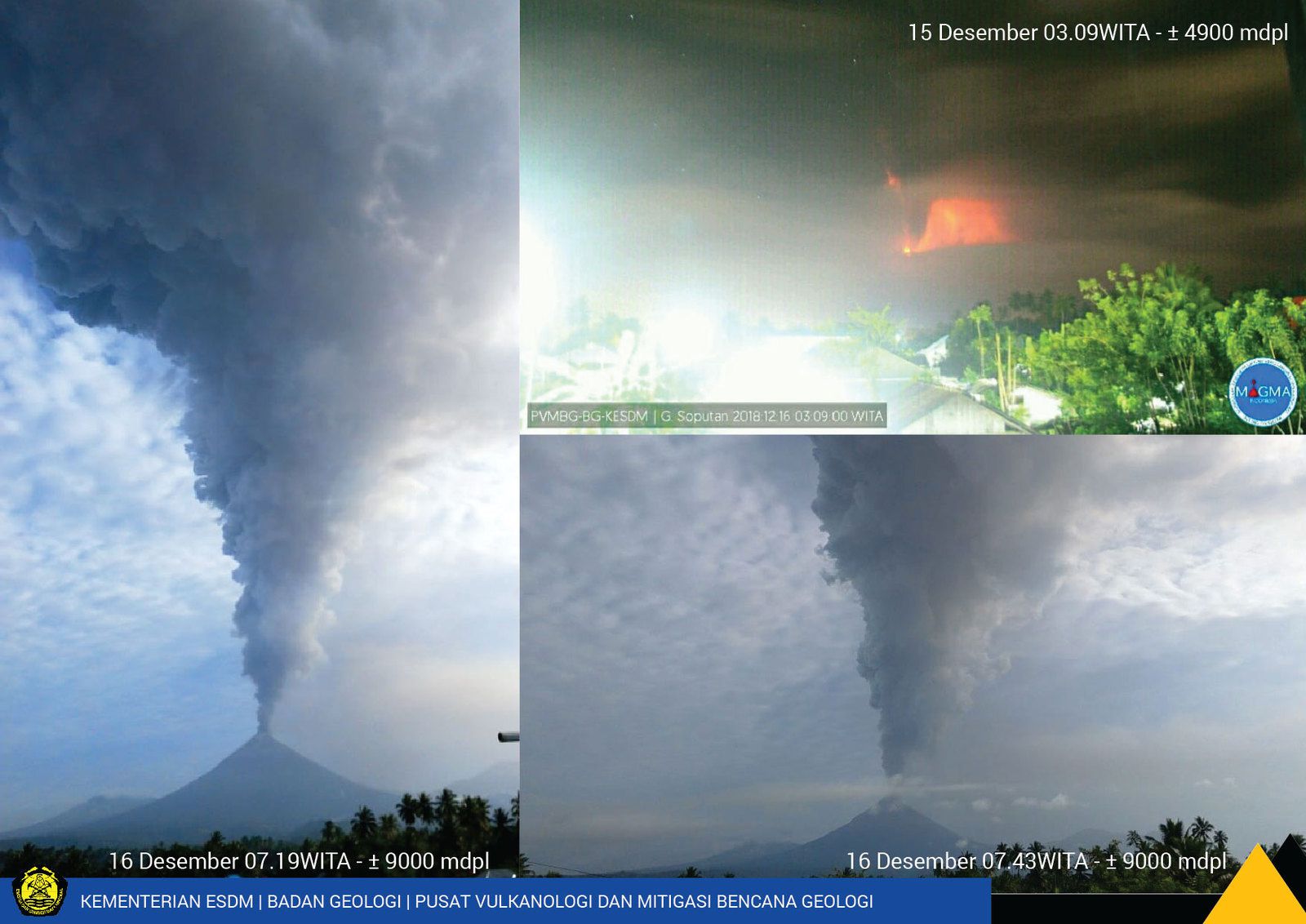 On Sunday, December 16, 2018, at approximately 3:09 am, incandescent emissions above the summit of Gunung Soputan were observed, accompanied by an eruptive column at ± 3,000 m above the summit (± 4,809 m above sea level). from the sea), gray and thick inclined to the southeast.

A VONA was published twice on December 16, 2018: at 04:00 WITA with color code ORANGE and at 5:54 WITA with a color code RED. Until now, continuous tremor continued to be recorded with the maximum amplitude (overshoot) indicating that the eruption activity was still in progress.

The status of G. Soputan is still at Level III (Alert) with a danger zone, which is a 4 km radius and a sectoral expansion southwest of 6.5 km.

The population around the volcano is encouraged to prepare masks of protection for the mouth and nose to avoid the potential danger of volcanic ash for the respiratory system. Drainage residents upstream of Soputan should be aware of the potential threat of lahars, especially during the rainy season. 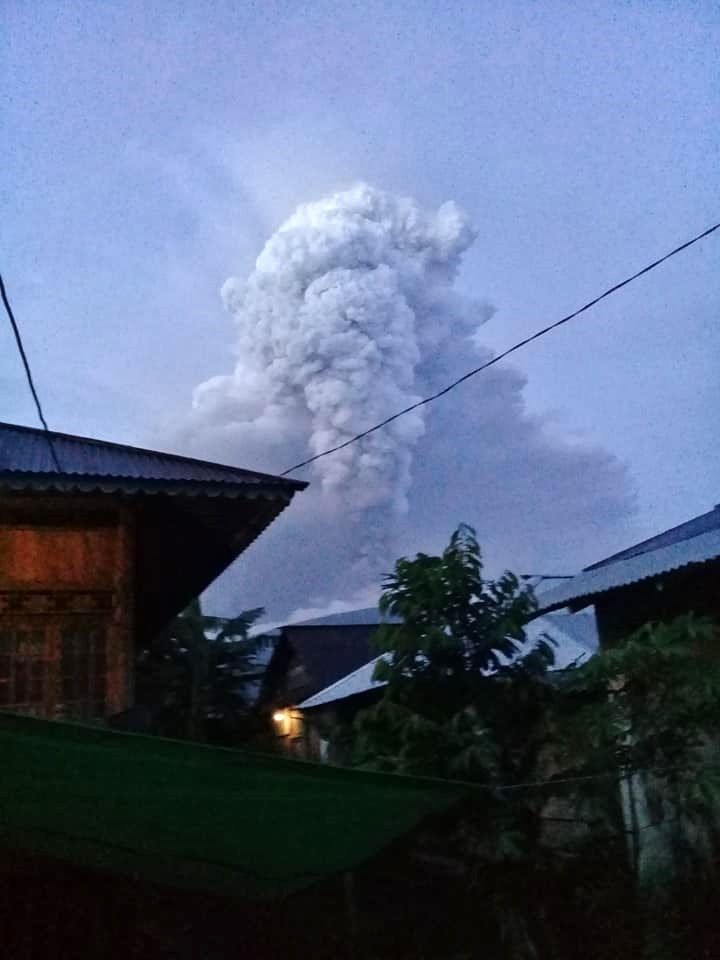 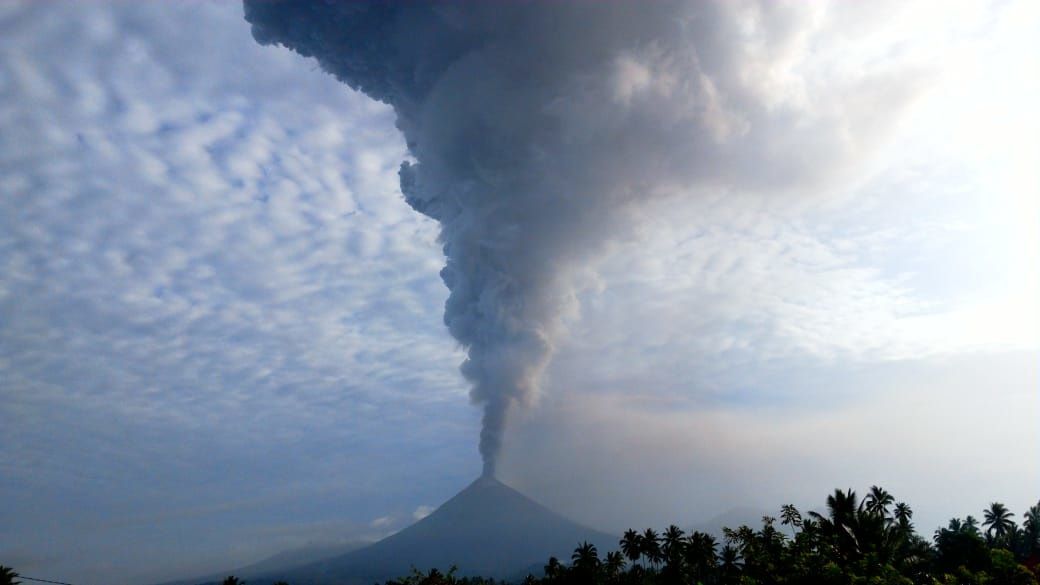 On December 10th, the lava emission by the intracaldeira cone from Veniaminof, in the Alaskan Peninsula, stopped, although explosive activity still occurs. Until December 13, there is no evidence of eruptive activity observed on the webcam and satellite images.

On Thursday, December 13th, the tremor reappeared intermittently, gradually becoming continuous. Since then, a plume has been observed and more vigorous activity has resumed, given the high temperatures recorded by the webcam and satellites, consistent with fountaining. 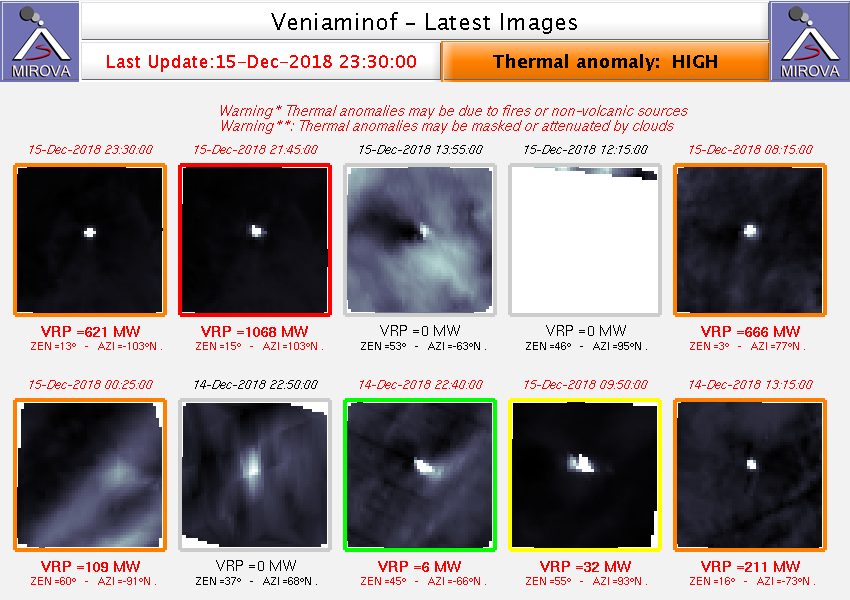