At Etna, three craters are still active this December 6, the Northeast, the Bocca Nuova and the new crater Southeast and its lava flow, marked by thermal anomalies reported by Mirova between 16 and 162 MW they days. The Sernageomin / OVDAS recorded on December 6 from 3:20pm a seismic swarm in Copahue; 200 volcano-tectonic earthquakes, associated with rock fracturing, occurred 6.2 km at the ENE of thecrater El Agrio.

The superficial activity of the volcano is characterized as the days before by a plume of gas and fine particles at a height of about 800 meters.

The alert level remains in Amarillo. At Popocatépetl, we notice, besides the exhalations, an explosion on December 6th at 1:17 pm; it was accompanied by a plume of gas, steam and ash that rose to 2,500 meters above the summit, before dispersing to the northwest. 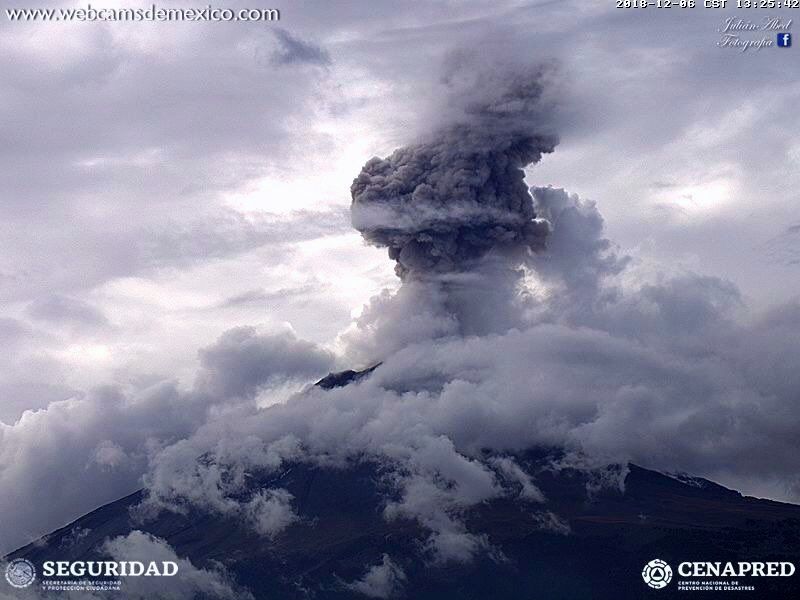 The growth of the Merapi dome continues at the rate of 2,200 m³ per day, a little down between November 29 and yesterday. The summit dome reached the volume of 244,000 m³ on December 6th.

A thick whitish plume is observed 50 meters above the summit.