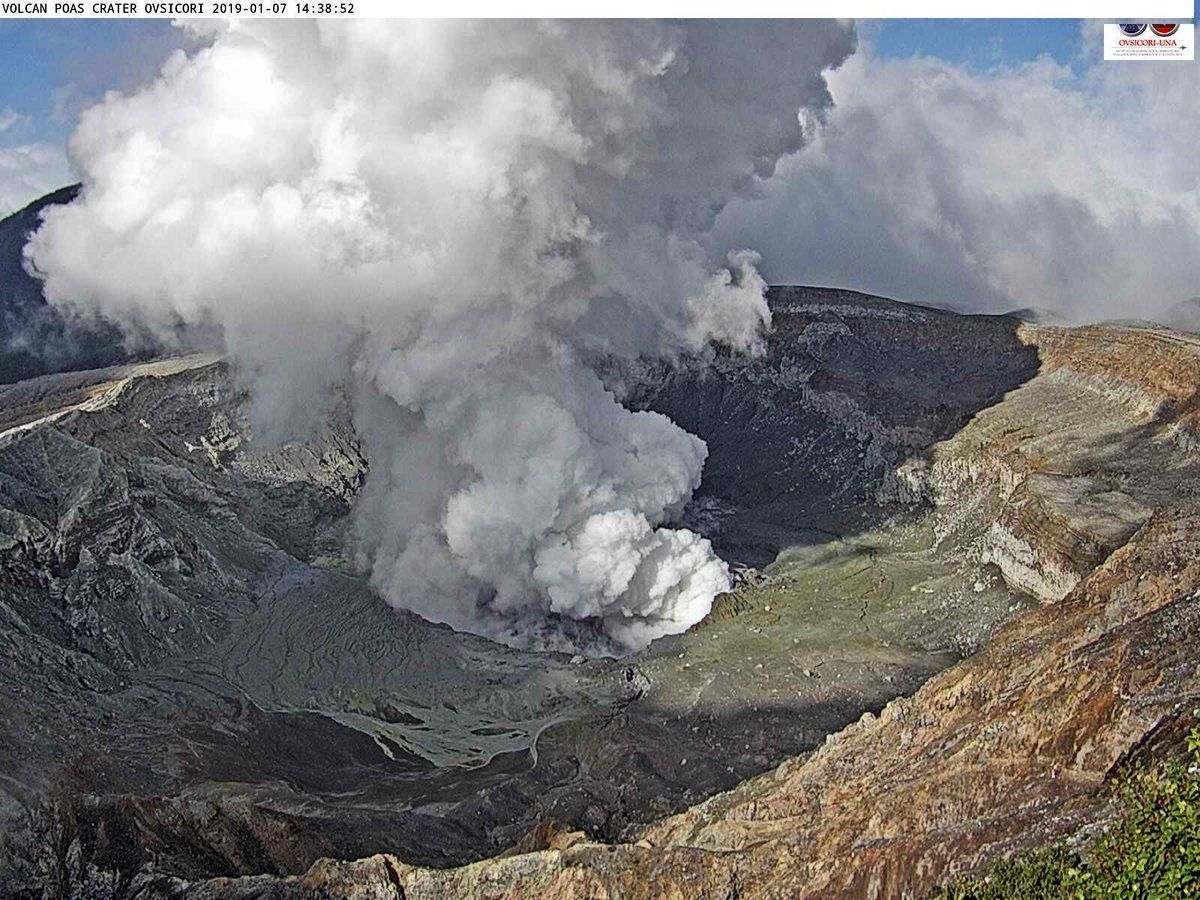 In Costa Rica, more or less intense phreatic activity has marked the acid lake of Poas, or what remains of it, since the beginning of January.

On January 7th, at 14:37, an eruption was accompanied by a plume 50 meters above the crater; it was generated by mouth A, located on the site of the ancient dome.

On January 8th, two phreatic episodes were observed at 7h and 9h40. The Ovsicori informs of "frequent phreatic eruptions throughout the morning. At Turrialba, an eruption occurred on January 8, accompanied by a white plume 500 meters above the crater; passive emissions of discontinuous ash were more sustained than the previous days, and ash falls are reported on Heredia At Anak Krakatau, the day of January 8th saw the Sutseyan eruptions continued, with gray and thick plumes reported by the PVMBG about 1,000 meters above the volcano, with a dispersion to the east.

At the seismic level, 61 eruption earthquakes, 11 blast earthquakes and continuous tremor of dominant amplitude at 4 mm were recorded.

The level of activity remains at 3 / siaga, with a 5 km forbidden zone around the crater, and an orange VONA.

The encounter between the magma and the seawater is reflected by its violent degassing, which fragmentation of magma under the effect of explosions; a chemical quench produces breccias called hyoloclastites. The fragmented lava forms plumes of black ash, called cypressoids plumes, accompanied by microdrops of condensed water vapor forming plumes up to several kilometers in altitude. Oystein Lund Andersen translated a second testimony about the day of the eruption and tsunami, interviewed by Lampung Tv, and that completes yesterday's one.

Another survivor, Puji, says that " the biggest explosion was not from the summit, but from the side of the volcano, then the summit collapsed.That explosion of the west flank caused the first collapse and the first wave, who smashed my boat; the sea smelled of sulfur and had the color of the coffee.A few moments after this first collapse, another happened on the east flank, and the sea water became hot. "- video link: https://youtu.be/Ampw9lUBOCY The activity of the north crater of Karangetang / North sulawesi continues, with a lava flow that has lengthened and a thick plume seen about 100 meters above the crater.