This small island, 3.5 km wide, is the emerged summit of a massive stratovolcano, located northwest of the Santa Cruz Islands, in the group of Solomon Islands (Melanesia).

Its topography is similar to that of Stromboli, with a breached summit and a "sciara" from the summit to below sea level.

The current activity is likely strombolian type, and marked by a weak thermal anomaly and a vapor plume. The Gunungapi Ibu, on Halmahera in the Moluccas, has a level 2 / waspada activity, with a 2 km forbidden zone, extended to 3.5 km on the north side.

Many gray-white plumes are reported up to 800 meters above the summit. JMA and VAAC Tokyo report an eruption in Kuchinoerabujoma on January 29, 2019 around 5pm local time. The Shindake plume rose to 2,800 meters asl at 5:14 pm to 5:16 pm, accompanied by a pyroclastic flow to the southwest for 600 meters. At Karangetang, at activity level 3 / Siaga on Siau Island, north of Sulawesi, emissions continue, white or gray, depending on the emitting craters.

For January 29, the PVMBG reports 70 avalanche earthquakes, 25 earthquakes of blast, 4 superficial and 4 deep volcanic earthquakes, and a continuous tremor of dominant amplitude at 0.25 mm.

The forbidden zone remains 2.5 km radius around the craters, extended 3 km to the northwest. At Merapi / Java, activity at the summit dome does not change. On January 29, 40 avalanche earthquakes, 3 low-frequency earthquake earthquakes and 2 hybrids were reported. The avalanches of incandescent blocks spread out over 50 to 1,400 meters. 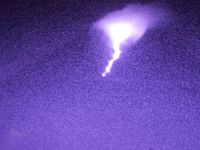