In the morning, the point is made by Nicolas Villeneuve in an interview with Imazpress: a crack opened yesterday at 1800 meters altitude on the east side of the Dolomieu, and an active fountain feeds two lava flows, whose forehead advances at a speed of about 1 km / h. The surface flows estimated from the satellite data, via the MIROVA platform (University of Turin) and HOTVOLC (OPGC - University of Auvergne), remain low and are between 3 and 7 m3 / s. 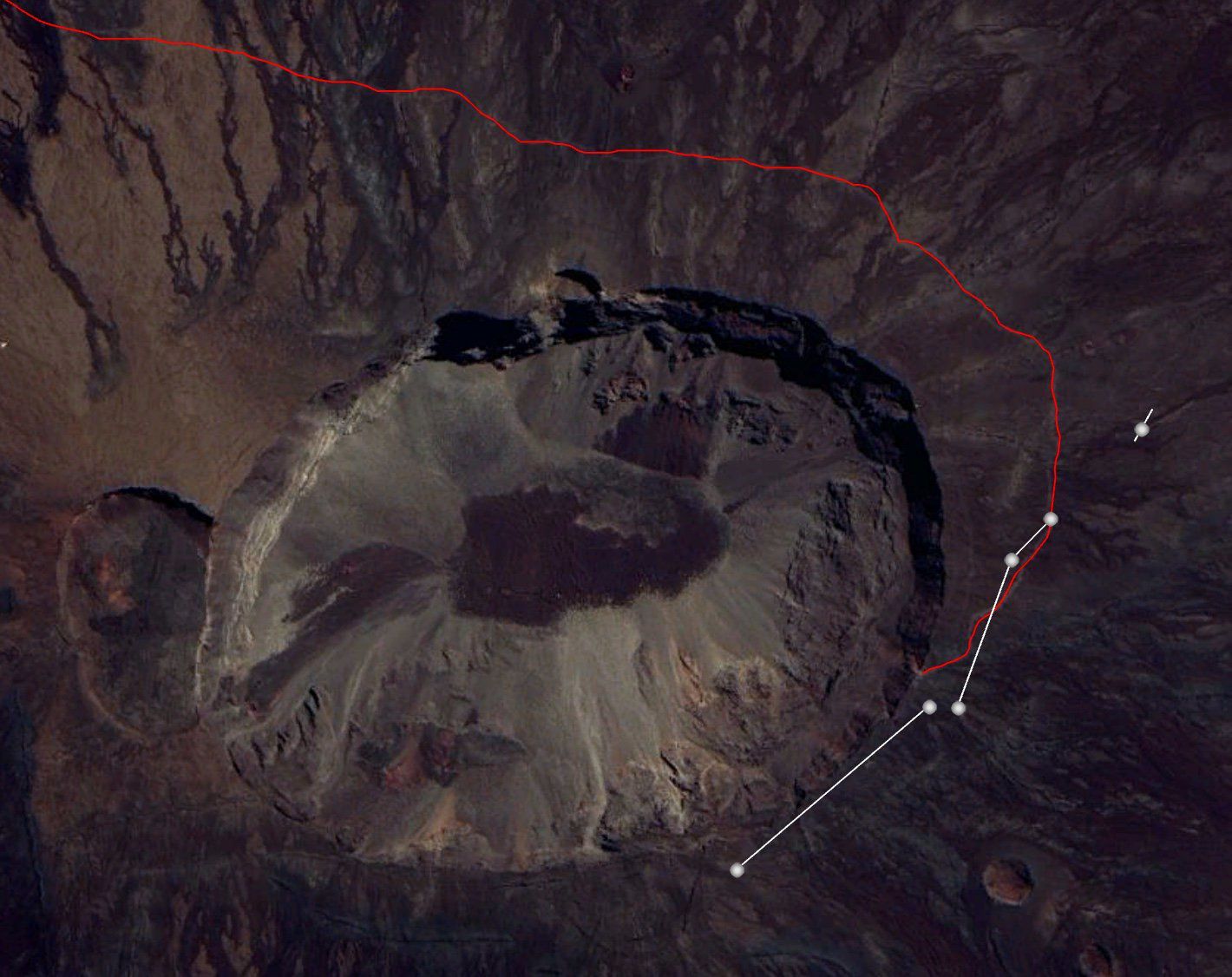 Piton de La Fournaise - part of the trail cut by the crack of the eruption of 18.02.2019, justifying the prohibition to enter the area - photo and notes of the OVPF / Twitter

The first flow cuts the crater Madoré and stops upstream of the crater Guyana,forming a small lava lake.

The second arm descends the slopes to join the part of the Grand-Brûlé destroyed by the fire of January 2019. It spreads over 1,600 meters, and to continue towards the sea, depends on a sufficient supply upstream. 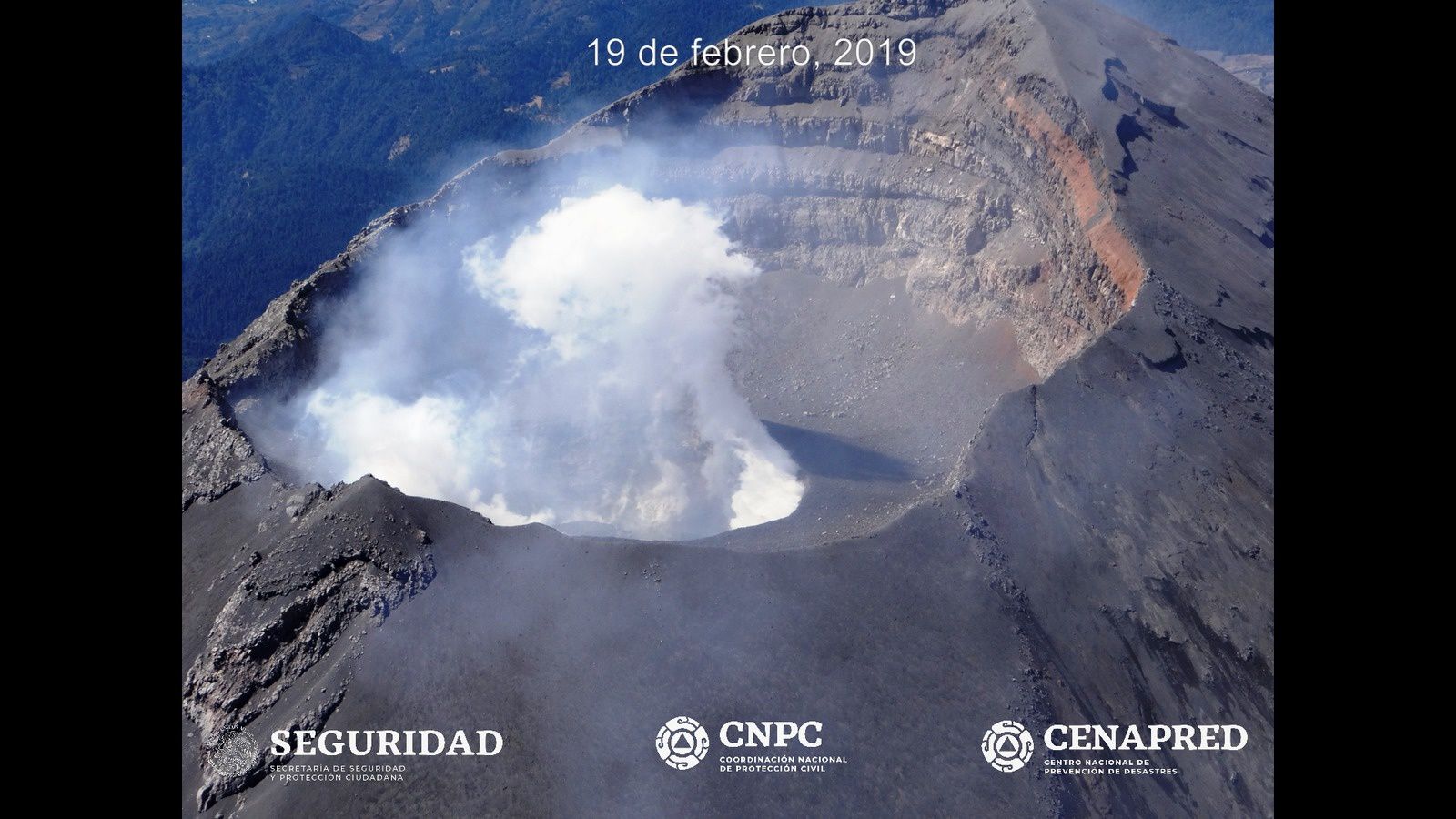 An overview of Popocatépetl was conducted on 19 February, with the support of the Federal Police. It confirms the formation of a new dome, N° 82, with a diameter of 200 meters.

Similarly, during this period, 1140 minutes of seismic signal associated with low amplitude tremors were recorded with a different frequency spectrum; In addition, 240 minutes of harmonic tremors were detected from 5:00 am. In Kamchatka, Karymsky is the seat of moderate  eruptive activity, characterized by ash explosions. On February 18th, the KVERT recorded a plume of ashes between 2,500-3,000 meters asl., Drifting towards the ESE for 117 km.

The aviation code is orange, due to a possible continuation of explosive activity and plumes up to 4 to 6 km in height. Villarica -the interior of the crater of Villarrica volcano, where a set of infrasonic sensors have been arranged - photo Volcanologia Chile 18.02.2019

Researchers at the University of Conception led by volcanologist Jose Luis Palma next to a member of our team, installed inside the crater of Villarrica volcano a set of acoustic sensors capable of detecting infrasound (<20 hz ).

In addition, a topographic survey was carried out using a drone to reconstruct the crater's internal geometry. Villarica - flying over the crater by drone - photo Volcanologia Chile 18.02.2019 The collection of infrasound acoustic data that is caused by the constant Strombolian activity (explosions of gas bubbles that are expelled from the lava lake) on open-duct volcanoes such as Villarrica has become an important tool for research and monitoring volcanic activity.
The cavity where the lava lake is stored acts in the same way as a wind instrument, where the tones change as the air volume changes. These analyzes, as well as the geometric characteristics of the duct, make it possible to obtain the depth of the lava lake with respect to the crater.

In addition, the magnitude and shape of the signals received provide information to correlate the magnitude of the explosions with the rate of expulsion of the emitted gases.
At this moment the lava lake lies beneath a solid crust that presents a small cone of slag, formed by the accretion and agglutination of lava splashes ejected during Strombolian explosions.