The Ambae volcano activity remains at level 2, according to the latest observations and analyzes of the seismic data recorded from the monitoring station. An imminent eruption could occur in such a major state of agitation. The danger area for personal safety remains 2 km from the active vent radius and areas in the yellow zone. (identical map since 21.09.2018)

Volcanic ash that fell on Ambae during the 2017 and 2018 eruptions could continue to alter the behavior of streams and streams when it rains. Streams and streams can produce floods and carry a lot more debris (sands, gravel and rocks). The flow path of creeks and streams may change due to flood debris. A landslide can occur in some places during heavy rainfall.

It should be noted that at the time of the bulletin being emitted by the observatory, the former tropical cyclone OMA is heading towards the archipelago of Vanuatu. 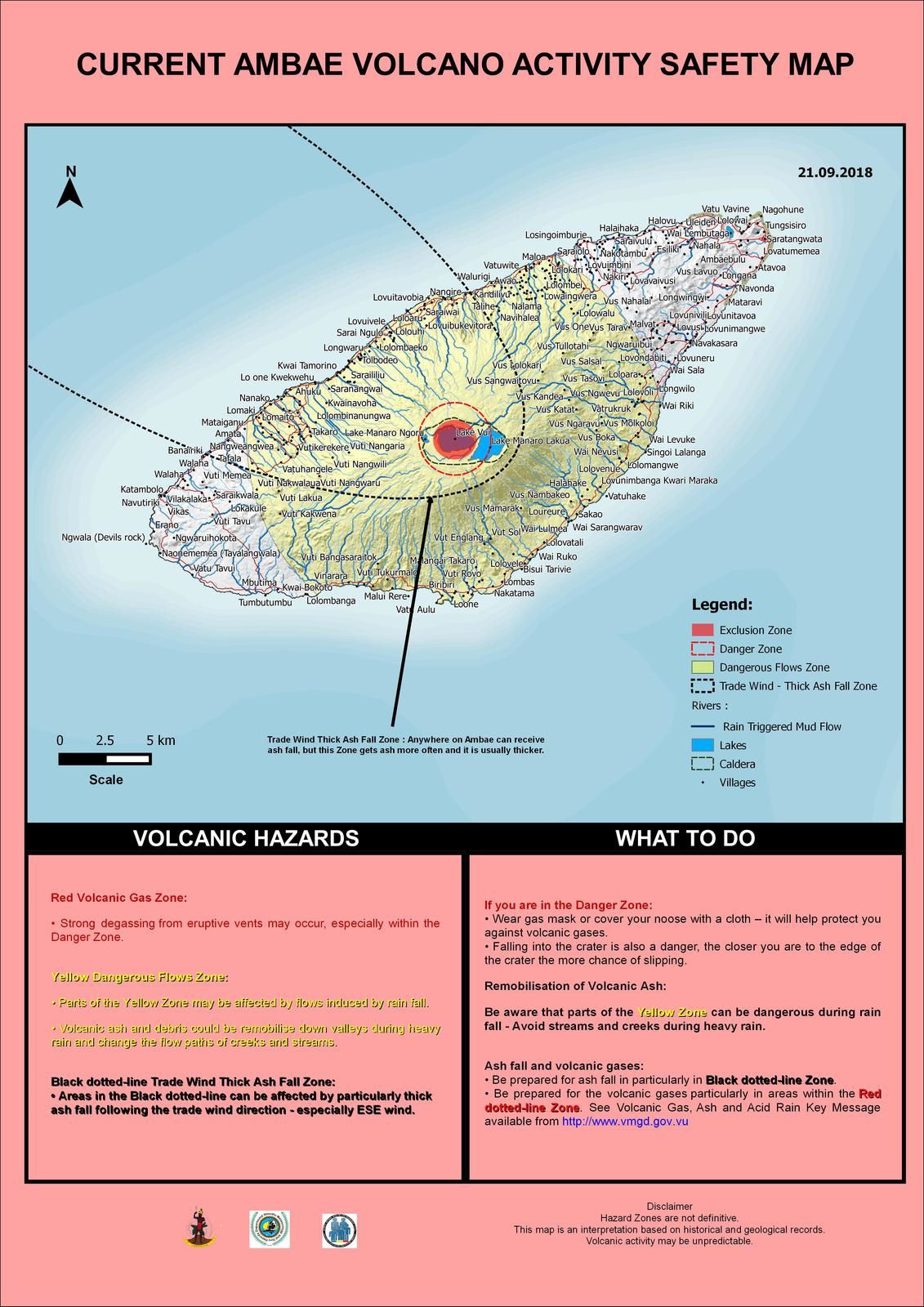 Over the past 36 hours, 8 superficial superficial volcano-tectonic earthquakes (above sea level) have been recorded.

The flow goes towards the sea, but the weak slope of the ground will slow it down.

Two teams were on the ground yesterday, to make GPS measurements at the top and on the flanks of the Piton de la Fournaise, which will complement existing ones, better understand the deformations associated with the eruption and perform the maintenance of measuring stations . A study, published in the journal Earth Science Review, brings together all the seismicity and ground movements recorded to date on the island of Vulcano in the Aeolian Islands, in search of a common thread that retraces the recent evolution of the phenomena observed on the island since its beginnings. The data collected from the 1970s to the present day have been used, from the first measurements with optical instruments to the latest GNSS satellite systems, by working on the series of the historical series of the different systems on a single evolutionary line. The work highlights the overlap of various tectonic and volcanic dynamics. The dominant regional tectonics is linked to the Tindari-Letoianni line (northeastern Sicily), which extends northwards into the Tyrrhenian low sea along the alignment of the islands of Vulcano, Lipari and Salina. This tectonic dynamic is the constant on which the dynamics most closely related to the volcanic system develop.

No eruptive activity has affected the island of Vulcano since the observation of geophysical and sensorial methodologies (the last eruption took place in 1888-1890), but some of the observed variations can be correlated with the state of the system. feeding and circulation of fluids supplying the island's important hydrothermal system.

The continuation of the observations will make it possible, from this level of knowledge also, to study and analyze in more detail the volcano-tectonic system and its dynamics, by detecting with increasing precision the variations and the possible phases of agitation.