At the Piton de La Fournaise, following the seismic crisis of 16/02/2019, 378 volcano-tectonic earthquakes (located above sea level directly under the summit) during the day of February 16 at 5 earthquakes. day (until 18h local time).

In parallel:
- Inflation (swelling) of volcano
- CO2 concentrations in the far-field soil (Plaine des Cafres and Plaine des Palmistes sectors) and in the sector close to the shelter sector are still high.

These three parameters (persistence of a seismicity, volcano inflation, high concentrations of CO2) testify, that even if magma spread from the superficial reservoir to the surface stopped, the re-supply of the latter of the deeper magma continues since the beginning of February. 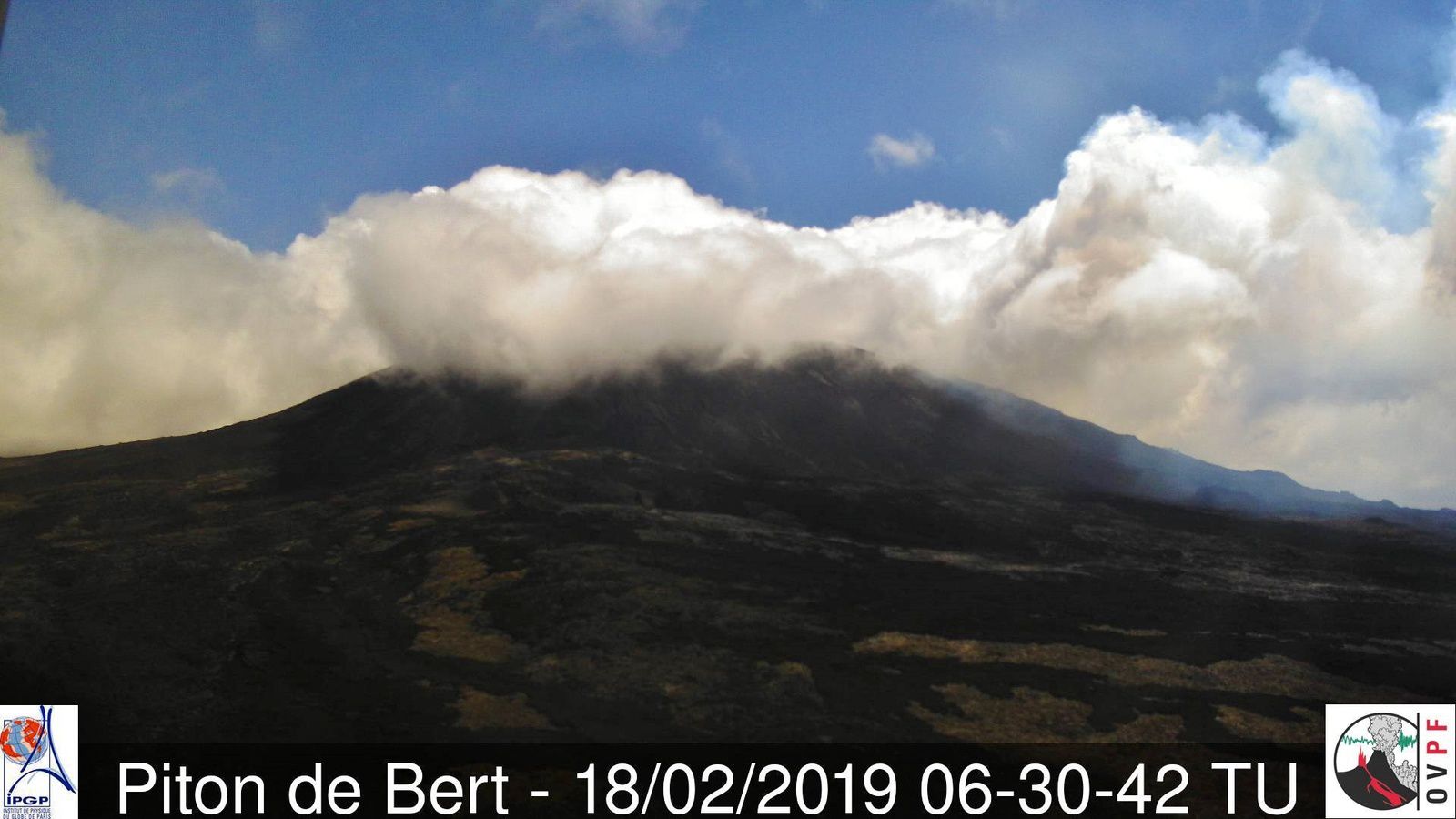 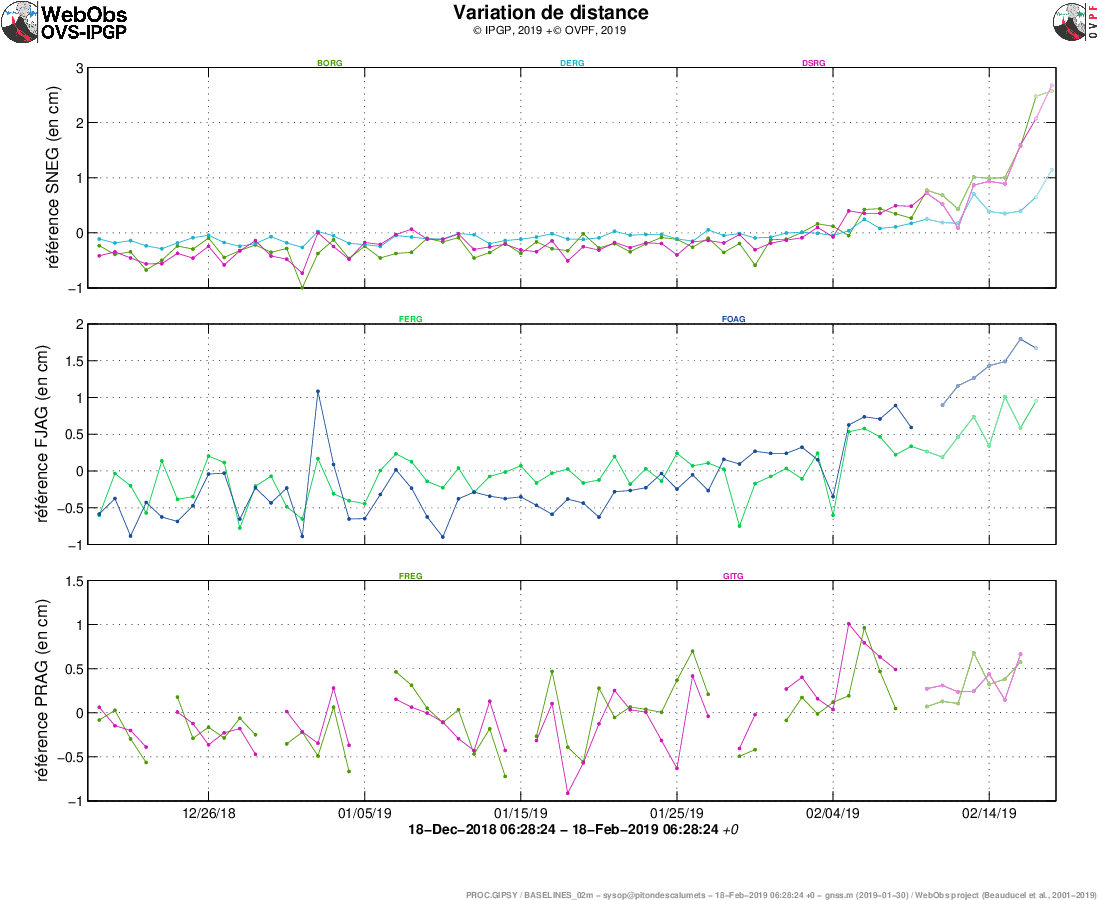 Piton de La Fournaise - Illustration of the deformation over 2 months, at 18.02.2019. Baselines are presented here (variation of distance between two GPS) crossing the Piton de la Fournaise building, at the top (at the top), at the base of the cone terminal (in the middle) and in the far field (cf. location on the associated maps). A rise is synonymous with elongation and therefore swelling of the volcano; conversely, a decrease is synonymous with contraction and therefore deflation of the volcano. Any colored periods in light pink corresponding to eruptions.

Following the new seismic crisis started at 09:16 local time and always accompanied by rapid deformation. the volcanic tremor, synonymous with the arrival of magma near the surface, has been recorded since about 9:48 am local time: " Volcan la pété ! " - the volcano is erupting !

Data analysis and plume observations from our cameras if it is open in the crater area Dolomieu, north-northeast sector at a high altitude for now. But the fog prevents the exact counting of the fissures and their precise location.

"The prefect decided to implement the alert phase 2-2 of the Orsec volcano specific device " Eruption underway in the enclosure " Monday at 10:15." - Public access to the Fouqué enclosure, since the path Pas de Bellecombe or any other path, as well as the pose of aircraft in the volcano area, are prohibited until further notice "says the prefecture. Update: "At least two eruptive fissures and a dozen lava fountains" are located on the eastern flank of the massif, said Aline Peltier, director of the volcanological observatory of Piton de la Fournaise (OVPF). She flew over the volcano late in the morning with Imaz Press Réunion Update 2 : Following an aerial reconnaissance conducted around 11:30, in collaboration with Imaz @ipreunion and @Linfore, the eruptive site could be confirmed despite bad weather conditions. " Two eruptive fissures have opened on the eastern slope of the Dolomieu .The eruption will be difficult to see from the upper parts of the volcano.The rapidly descending flows were seen from the Laves road, and even the National Road 2, of the Grand Brûlé ". (explains Aline Peltier on the info.re)

Fountains of lava (at least ten to 11:30 spread over the two cracks) less than 30m high and lava flow well active escaped these two cracks. The front of the longest flow was already after an hour of eruption at 1900m altitude. This rapid spread of the flanks is related to steep slopes in this area.
Surface flows estimated from the satellite data, via the MIROVA platform (University of Turin) and HOTVOLC (OPGC - University of Auvergne), were included at the beginning of eruption between 25 and 40 m3 / s, values classically observed in beginning of eruption at Piton de la Fournaise. 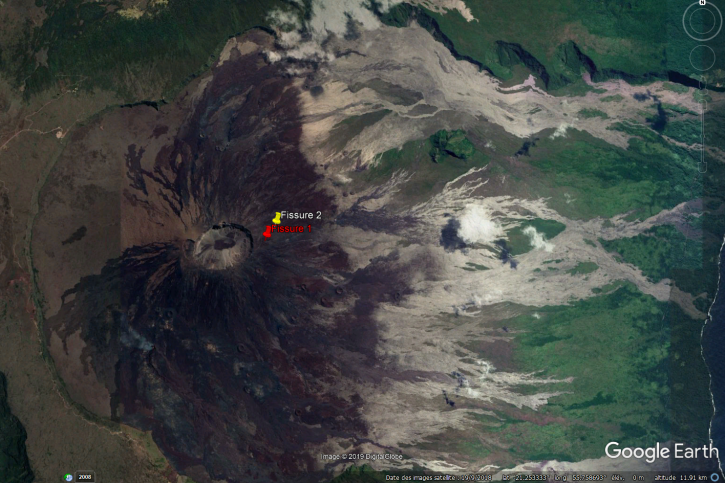 Piton de La Fournaise. - Location of two eruptive fissures that opened on the outer flank of the crater Dolomieu this morning at 9:48 local time.