In Kamchatka, Karymsky and Sheveluch continue their activity.

Although moderate, the eruptive activity of Karymsky developed on March 11 a plume of ashes at 2,500 meters asl, drifting towards the ESE over 65 km. The Sheveluch, still in orange aviation alert, continues its explosive-intrusive eruption, with plumes emitted at 4,500-4,700 meters asl, before drifting towards the ESA for 70 km. 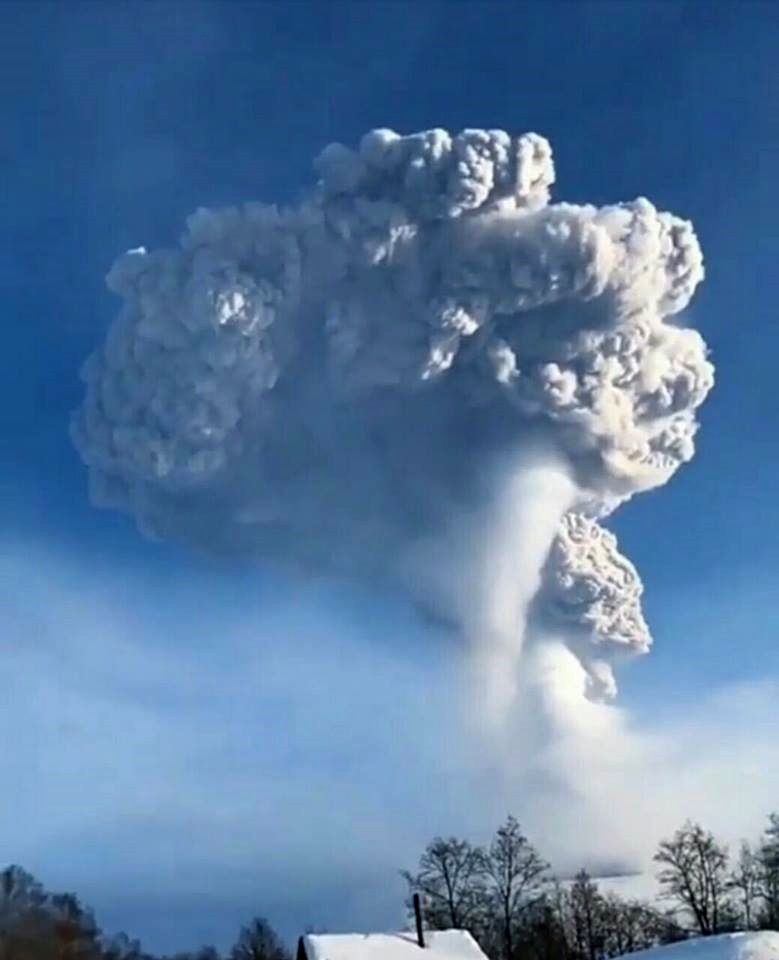 Following the stop the surface eruptive activity at the Piton de la Fournaise on March 10 at 6:28 local time, a seismicity is still recorded under the summit area of ​​the volcano. Thus 26 superficial superficial earthquakes and 1 deep earthquake have been recorded since the end of the eruption on March 10 at 6:28 am local time and 19:30 local time. Because of this seismicity, no hypothesis is discarded as to the evolution of the future situation (final shutdown, resumption of activity on the same site, resumption of activity on another site). 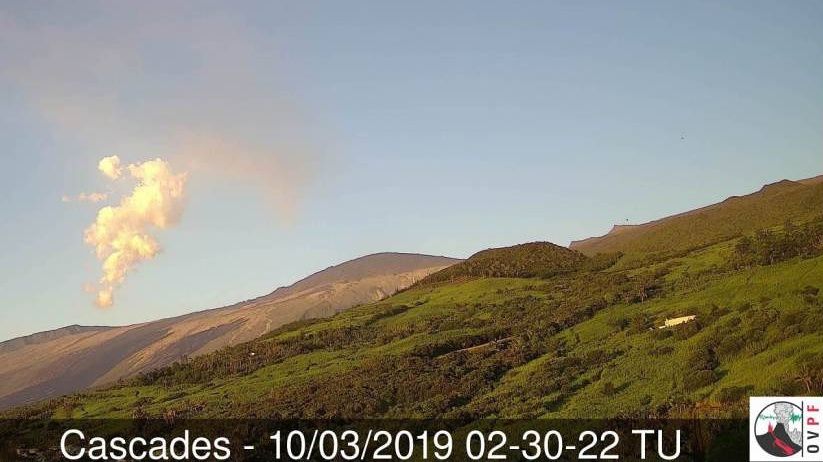 Volcanic eruption of the Piton de la Fournaise on the island of Reunion on Saturday 9th between 8:00 pm and 03:39 am Sunday March 10th, 2019 on a view from the Grand Brûlé - vidéo http://www.reunion-extreme.re /

The abrupt cessation of this eruption was preceded by a very intense surface activity and lava fountains a hundred meters high were postponed to 23h on 9 March. These brutal stops are not unusual at Piton de la Fournaise and generally occur for 50% of eruptions.

The lava volumes emitted on the surface between February 18 and March 10 could be estimated at about 14.5 (+ or - 5) Mm3 from the satellite data, via the HOTVOLC platform (OPGC - University of Auvergne) and MIROVA (University of Turin). 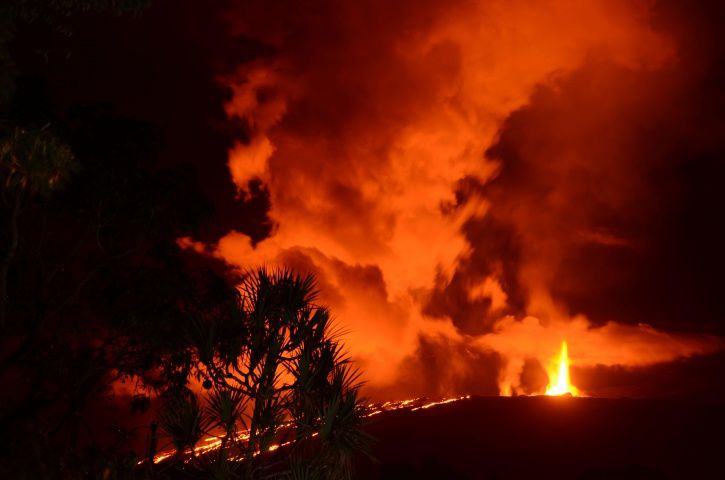 In these conditions, the prefect of Reunion decided to go into the backup phase of the specific ORSEC device of the Volcano Piton de la Fournaise, from Sunday, March 10, 2019.

A residual eruptive tremor is always recorded, so no hypothesis is discarded as to the evolution of the situation to come (final stop, resumption of activity on the same site, resumption of activity on another site). As a result, the ban on access to the upper part of the enclosure remains in force until further notice pending the conclusions of the recognitions that will be made in the coming days.

Find all the information related to the Piton de la Fournaise activity on the different media of the OVPF-IPGP:
- the website (http://www.ipgp.fr/fr/ovpf/actualites-ovpf),
- the Twitter account (https://twitter.com/obsfournaise?lang=en), 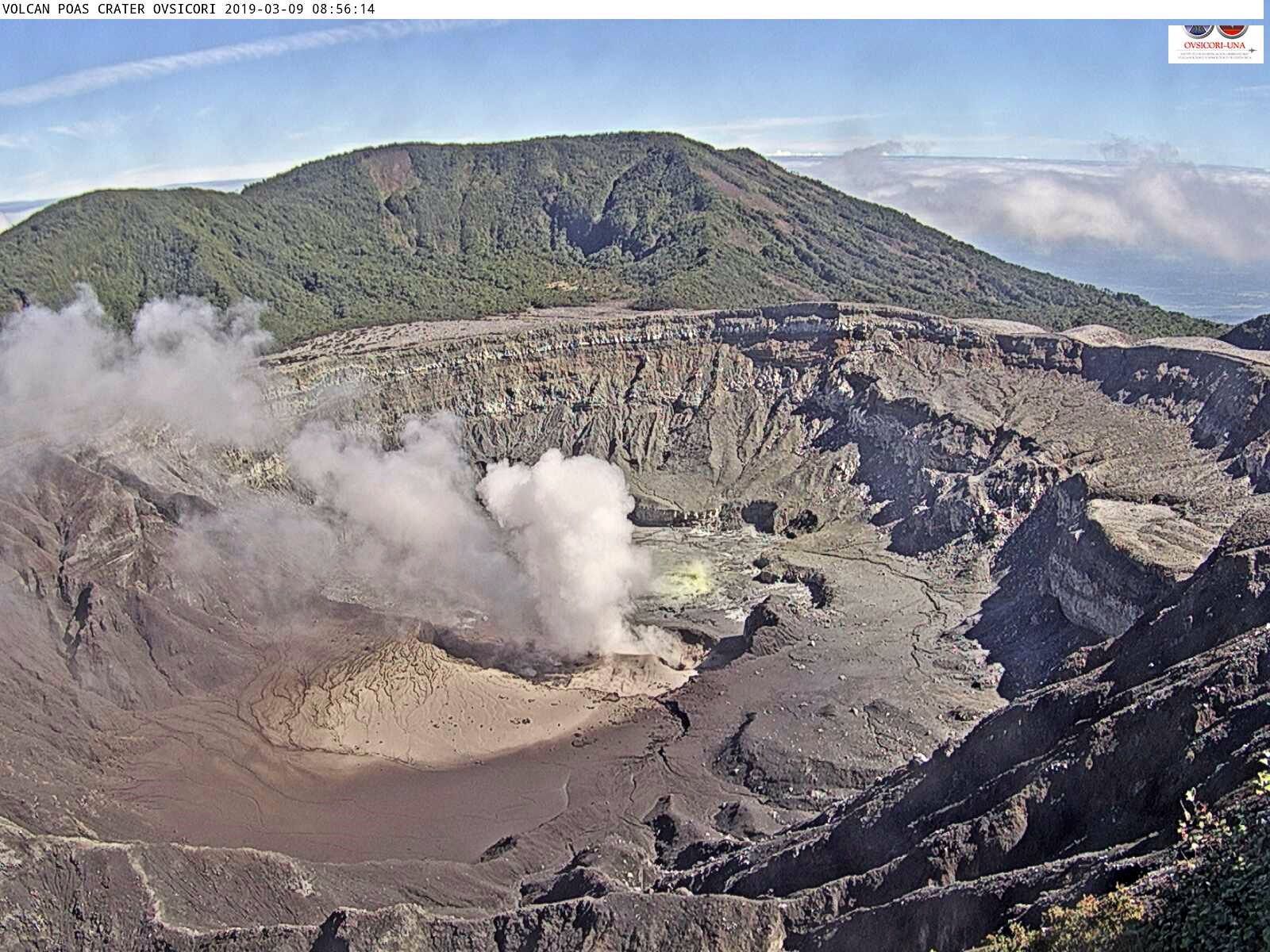 According to seismologist Javier Pacheco, since last March 7, the Poás volcano has presented a discontinuous tremor of small amplitude, which, during short periods during which both the tremor and the visibility of the crater, coincided force of the gas plume.

For March 8, discontinuous tremor and low amplitude remain. Where weather conditions permit, similar behavior is observed, with an increase in the vigor of the gas plume and, at certain times, ash emissions, which are low and diluted and whose altitude does not exceed 200 m. On March 9, the height of the plume of water vapor, aerosols and magmatic gases varies between 300 and 500 meters from the bottom of the crater. Some low amplitude LP volcanic earthquakes associated with small sporadic emissions of very fine ash are recorded. Since March 8, 2019, the permanent MultiGAS system for controlling the composition of gases near the west of the crater floor smokers has recorded in the plume a significant decrease in the concentration of magmatic sulfuric gases. (SO2 less than 5 ppm, CO2 / SO2 greater than 1.2 and H2S / SO2 less than 0.3), as well as a slight increase in the proportion of gaseous carbon dioxide, CO2.

This indicates a predominance of the hydrothermal system over the magmatic system since the magma that was extruded in 2017 loses gas, cools and gradually crystallizes.