In Turrialba / Costa Rica, an eruption occurred on February 28 from 10:50 local; it lasted 4 minutes and was accompanied by an ash plume 500 meters above the crater.

The seismic activity remains in the norms of the previous days. This activity remains in the context of a minor eruption, in relation to the construction-destruction cycles of the dome. Also in Chile, the level of emissions of Peteroa, of gas and particles, seems to have dropped a little in late February.

The system remains open at the top; alert level remains in Amarillo 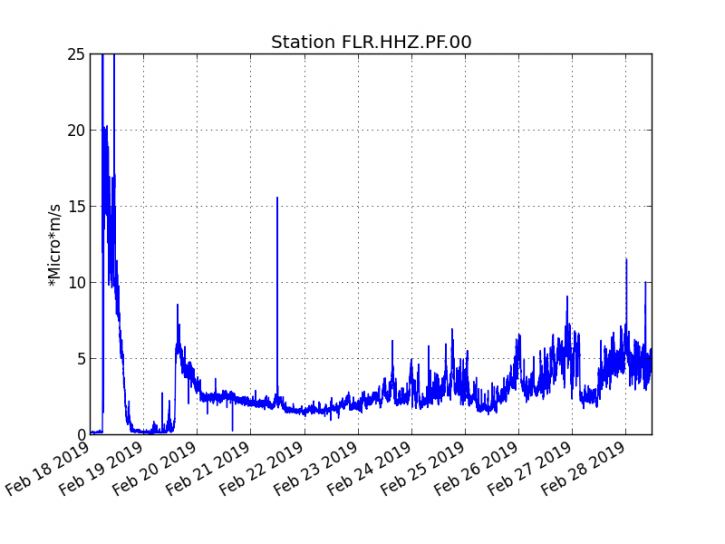 Over the last 36 hours, 3 superficial volcano-tectonic earthquakes (above sea level) have been recorded.

Over the last 36 hours, surface flows estimated from satellite data, via the HOTVOLC platform (OPGC - University of Auvergne), fluctuated between <1 and 16 m3 / s. Note that low values ​​(or zero values) are recorded when cloud cover does not allow acquisition.

A mapping of the lava flow dated 28/02/2018 carried out by the OI2 platform (OPGC - Clermont Auvergne University) using satellite data confirmed the slow progression of the lava flow (300 m in 5 days). The casting front is located 1200m above sea level and only the north arm is currently active. As part of the seismic activity in Mayotte, on February 26th, a magnitude 4.8 earthquake (USGS) was recorded.

A mission of the Physical Institute of the Globe of Paris (IPGP), named "Tellus Mayotte", is present on zone from 22 to 28 February 2019 to install seismometers. When recovering the 6 seismometers in 6 months, we should make a big leap in the understanding of the phenomenon that shook Mayotte for nearly 10 months. An island that continues to move, and to sink.

The Journal de Mayotte delivers an interview with the Director of the BRGM:

"It will be remembered that the hypothesis of a magmatic fluid had succeeded to that of a friction of tectonic plates, following an atypical wave recorded on November 11, 2018, which had circled the Earth, and the observation of displacement of the island of Mayotte from 6 cm to the east, and its 7 cm depression, a phenomenon that continues, "without accentuating", indicates Frédéric Tronel, Director of the Office of Geological Research and Minières (BRGM), since we are now at "a displacement of 12 to 14 cm to the east, and a collapse of 10 cm" since June, we must integrate the 2 cm of movement "natural, linked to the movements especially the African Rift "."

Source: The Journal of Mayotte.

Monitoring of the seismic swarm underway in Mayotte: magnitudes of earthquakes as a function of time (in day, as of 10/05/2018) - Doc. BRGM