Updated at 13h local by the OVPF:

At the Piton de La Fournaise, following the strong increase observed for more than 48 hours, the intensity of the eruptive tremor remains very high. This sharp increase in the tremor is to be related to the opening of two new cracks on March 5th and 7th. Following these two new openings, the surface flows estimated from the satellite data, via the HOTVOLC platform (OPGC - University of Auvergne), increased significantly with values ​​between <1 (value assigned / decreased by the cloud cover) and peaks> 50 m3 / s; the average over the last 24 hours is around 20-25 m3 / s.

These increases in flows favored a rapid progression of the flows over the last 24 hours. Based on the visual feedback from the RN2 and the observations from the OVPF webcam located in Piton des Cascades, the active casting front was estimated at 650m - 700m above sea level this morning at 8am. The casting front has traveled about 1km in 24 hours and this morning was between 2.5 and 3 km from the national road 2. 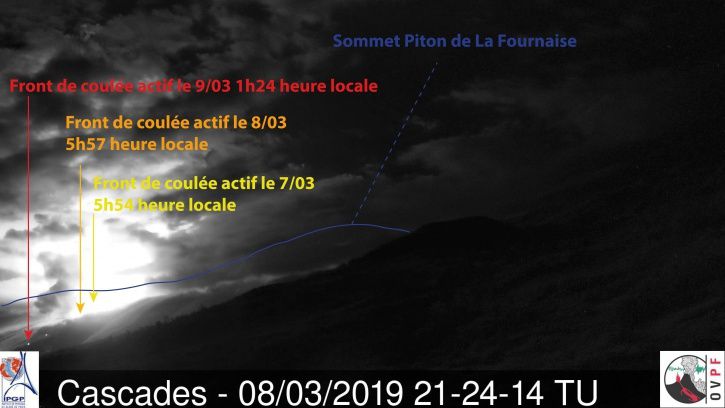 The NOVAC stations of the OVPF located around the Enclos Fouqué have detected for the day yesterday emissions of SO2 in the air 3 to 4 times greater than those recorded at the beginning of the eruption. In parallel, the US satellites (Gome2 and OMI) but also the European satellite Sentinel 2 have detected on the day yesterday a plume of SO2 spreading full East. On the Gome 2 and OMI satellite data, the plume can be followed respectively 450 km and 550 km (different resolution), which makes it pass to the south of Mauritius.

CO2 concentrations in the near-field soil (volcano deposit area) appear to have dropped since this morning, indicating an acceleration of the superficial transfer of magma (from the reservoir to the surface) relative to the deep transfer (from the depths to the reservoir ).

Over the last 36 hours, more than 100 superficial volcano-tectonic earthquakes (above sea level, at a depth <2.5 km) have been recorded below the summit zone. This number is largely underestimated because of the difficulty of counting them in view of the intensity of the tremor.

It should be noted that this STRONG seismicity under the summit zone has been increasing for 48 hours, often with compression mechanisms at the source, which could correspond to collapse of the roof of the superficial magmatic chamber due to its major emptying. This seismicity is closely followed by the OVPF, indeed in case of propagation of this seismicity towards the surface (which is not currently the case), it could lead to the formation of a pit-crater (depression formed by a subsidence of the surface above a reservoir of magma that is emptying) as has been observed in the past at Piton de la Fournaise (eg December 2002).

Moreover, given all these parameters (increase in surface flow rates, rapid transfer of magma from the reservoir to the surface, seismicity), the opening of new eruptive fissure (s) at the level of eruptive site or elsewhere (further upstream or downstream, inside or outside the Enclosure) is not excluded.