Update on the volcanoes of Vanuatu and Kilauea.

An update on the state of volcanoes in Vanuatu : five volcanoes remain on alert level 2.

Volcanic troubles continue in Gaua. Volcanic activity is expected to remain at similar levels, consistent with Level 2 Volcanic Warning. The danger zone for the safety of people is limited to the volcanic cone.

The activity consists of a current volcanic vapor cloud that may contain volcanic gases. The gas will continue to feel as the volcanic cone approaches. 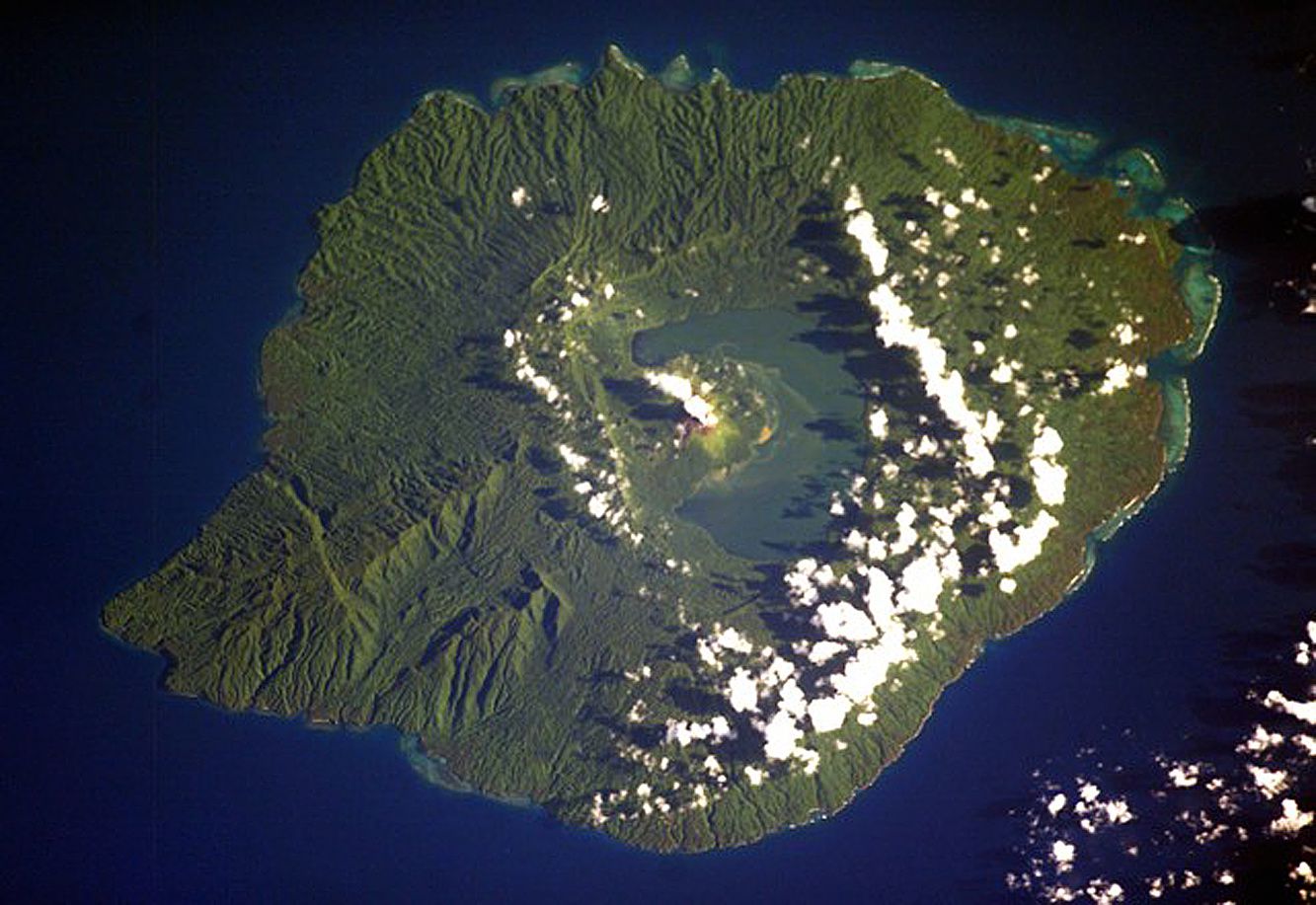 Volcanic ash that fell on Ambae during the 2017 and 2018 eruptions could continue to alter the behavior of creeks and streams when it rains. Streams and streams can produce floods and carry a lot more debris (sands, gravel and rocks). The flow path of creeks and streams may change due to flood debris. A landslide can occur in some areas during heavy rainfall.

The latest observations and analyzes of the seismic data recorded by the monitoring station confirm that the activity of the volcano is in the state of major disorders (level 2). Volcanic activity consists of the continuous emission of steam and / or other volcanic gases. Villages exposed to prevailing winds could expect to find deposits of volcanic ash falls and smell volcanic gases. 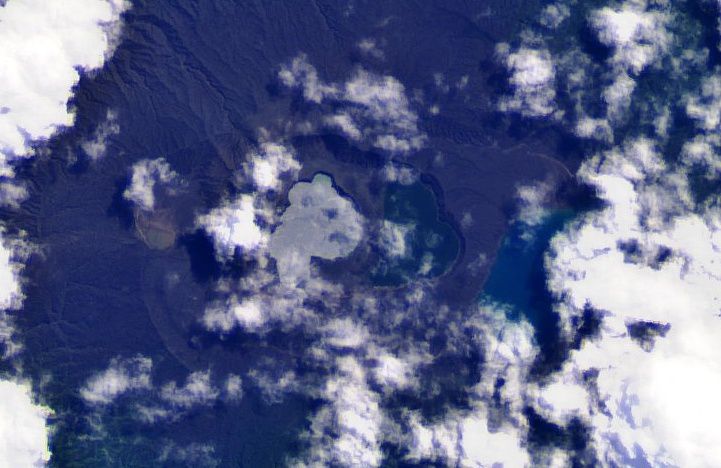 On April 24, the Vanuatu Meteorological and Geo-Risk Department (VMGD) reported on seismic activity and steam emissions at Ambrym .

The lava lakes of the Benbow and Marum craters had ceased to be active on December 16, 2018, one day after the beginning of a crack eruption in the ESE portion of the summit caldera near the Lewlembwi crater, and continued to be inactive.

The activity of the Lopevi volcano is unstable in the state of major troubles. In the current state of things, volcanic activity is likely to increase at any time, but it could also remain at the same level for a long time. The danger zone for the safety of people is limited to the island.

Current observations and seismic analyzes recorded from the monitoring network confirm a still very active volcanic activity in level 2. The activity continues to occur in active craters near the crater of the summit and consists of continuous emissions of steam. and other gases. 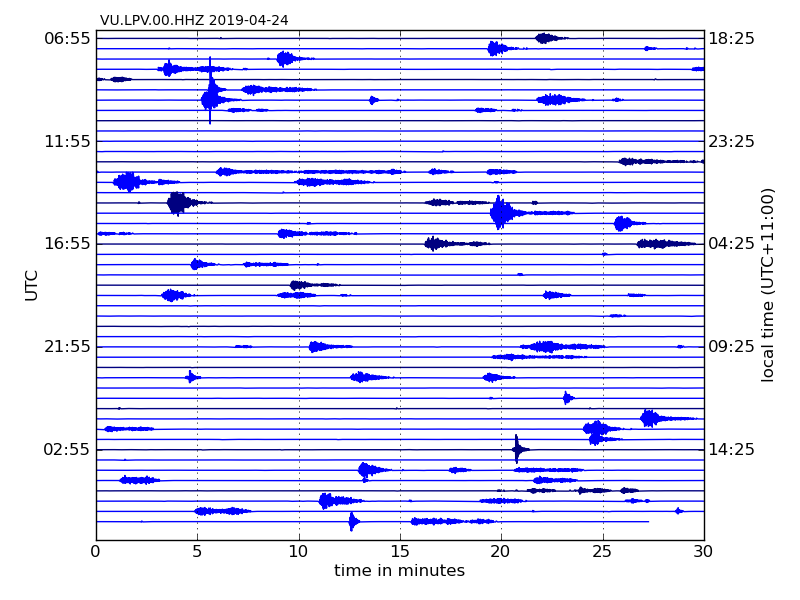 Instability continues in Yasur on Tanna Island. Volcanic activity is expected to remain at the same level, in accordance with Level 2 Volcanic Warning; the danger zone remains at 395 m around the eruptive vents. The danger zone for life is limited in the permanent exclusion zone.

The latest observations and analyzes of the seismic data recorded from the monitoring network confirm a continuous volcanic activity in the level of major agitation and confined in the crater. The activity consists of explosions in progress. Some explosions remain intense and volcanic bombs may fall in and / or around the crater. Eruptive vents can emit volcanic gases and / or ash clouds. The gas will continue to feel as you approach the caldera and crater. In Kilauea, the summit area continues to stabilize after a number of collapses and tens of thousands of earthquakes that rocked it last year.

On April 25, a significant fall of rocks was observed from the Volcano house, under the Jaggar museum and the HVO site unoccupied.

Some parts of the National Park are open, others remain prohibited because of the danger or the disappearance / bad condition of the trails. Specific information from: https://www.nps.gov/havo/20190419_recovery_faq.htm 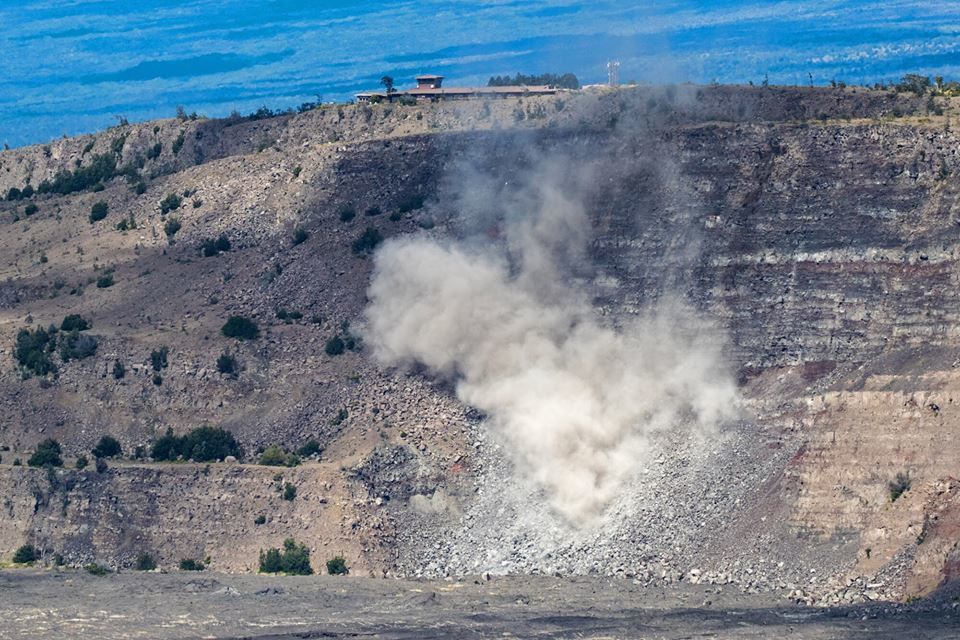 Kilauea summit - 25.04.2019 - significant drop of rocks has been observed since the Volcano house, under the Jaggar museum and the site of the HVO unoccupied. - photo NPS / Janice Wei