On May 23 at 0:10 GMT / May 22 at 19:50 local, an explosion was accompanied by a plume of ash and gas rising to 3,500 meters above the crater. Ash falls have been reported on Atlautla, Ecatzingo, Ozumba, Tepetlixpa, Atlatlahucan, Cuautla, Ocuituco, Tetela del Volcan, Tlayacapan, Totolapan, Yautepec y Yecapixtla.

The explosion was followed by emissions of gas and ash not exceeding 500 meters.

Another episode occurred on May 24 at 7:43 local, lasting 242 seconds and was accompanied by a cloud of ashes.

The Vona is orange, and the activity level is 2 / waspada. In the Moluccas archipelago, the Ibu volcano on Halmahera, in eruption since 2008, showed on May 23, 89 eruption earthquakes, 101 breath earthquakes, 77 harmonic tremor episodes, a tornilo earthquake.

Low to moderate thermal anomalies have been reported in recent days by Mirova, and hot spots visible on the Sentinel 2 image of May 21st.

A white plume is observed between 200 and 800 meters in height.

The alert level is 2 / waspada, with a 2 km radius restricted area, 3.5 km to the north. The vona is orange. 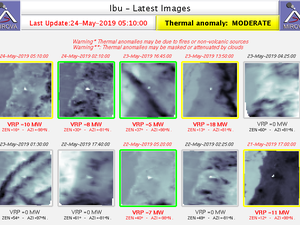