Back on the eruption of Ulawun in Papua New Guinea.

RVO / Rabaul Volcano Observatory reported that the values ​​of the RSAM at Ulawun had steadily increased on 24 and 25 June, then increased sharply at about 03:30 on 26 June. The RSAM values ​​reflect an increase in seismicity dominated by volcanic tremor.

An eruption began on the morning of June 26 with gray ash emissions that, over time, became darker and more energetic. The plumes reached 1 km and drifted to the northwest, causing light ashfall in the northwestern and southwestern areas. The inhabitants heard roaring and scolding during the period from 6:00 to 8:00. 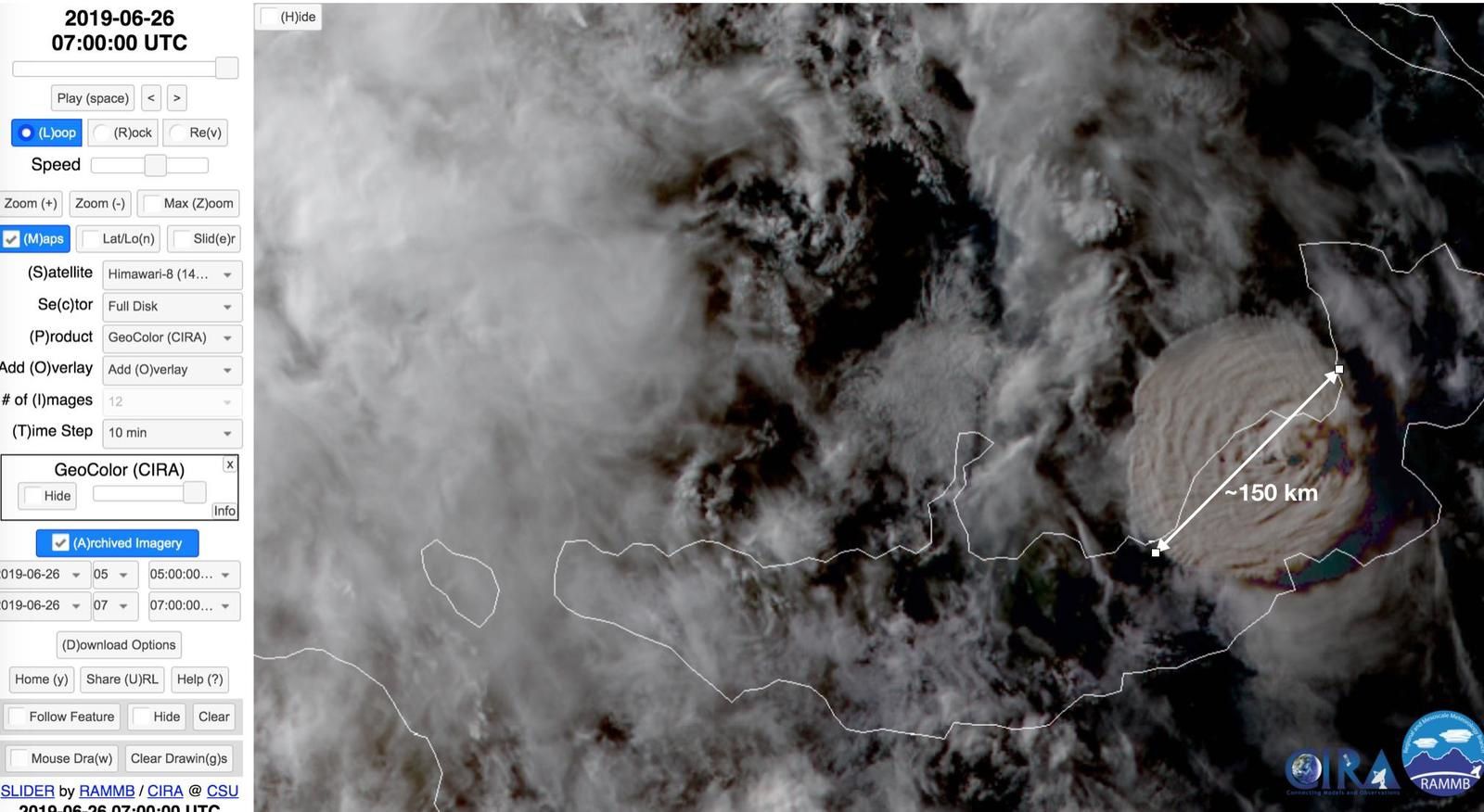 A new surge of activity generated ash plumes that at 15:12 reached 16.8 km a.s.l. and drifted south and southeast. 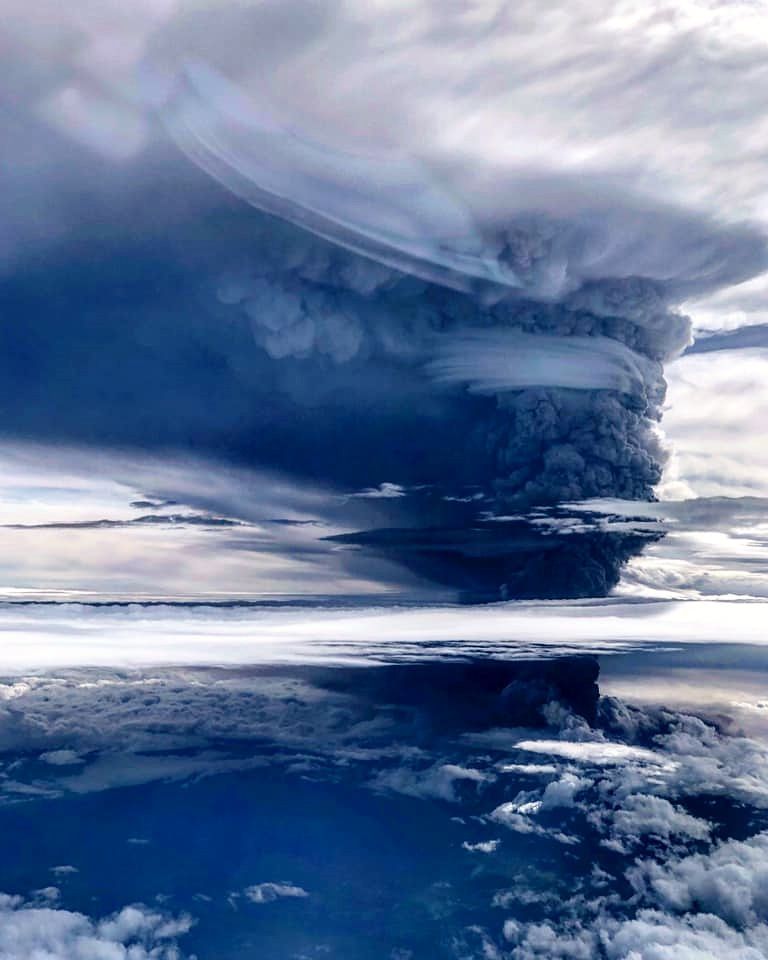 With respect to sulfur dioxide emissions, the satellite data only recover about 75% of these, the emissions to the west are not taken into account: According to AIRS SO2, connected by Simon Carn, the cloud of gas would contain about a minimum of 0.1 Tg of SO2, similar to the values ​​of the October 1980 eruption. The RVO stated that parts of the low ash plume drifted westward, causing varying amounts of ashfall in the northwest and southwest areas.

A pyroclastic flow descended the northern flank. Residents were evacuated to the northeastern and western areas; A newspaper article noted that about 3,000 people had gathered in a local church. According to another source, an observer aboard a helicopter reported a column of incandescent materials emerging from the crater, residents said the sky was black and a main road in the northern part of the island was blocked by volcanic materials. The inhabitants also reported a lava flow near the village of Noau and the Eana Valley.

RVO reported that the eruption stopped between 18:00 and 19:00. The incandescence visible on the north flank was either due to a lava flow or to pyroclastic flow deposits. In New Zealand, White Island is experiencing moderate volcanic activity and the level of volcanic alert is high at level 2.

Our increased monitoring of Whakaari as part of the response to recent earthquake swarms has shown an increase in sulfur dioxide flux to historically high levels.

A gas emission detected today reached 1,886 tons / day of sulfur dioxide, nearly three times the previous values ​​measured in May 2019. This is the highest value recorded since 2013 and the second highest since the beginning of regular measurements in 2003.

Other gas measurements will be undertaken as soon as conditions permit. The nearby earthquake swarms continue although at levels lower than those reported in previous bulletins. The relationship between seismic swarms and the high rate of sulfur dioxide observed today is not yet clear.

The change in gas flow represents a significant change in our background monitoring parameters at Whakaari and corresponds to moderate or increased volcanic activity. As such, we changed the level of volcanic alert to level 2 and the aviation color code is changed to yellow.

Volcano Alert Level 2 is mainly associated with hazards of volcanic disorders potentially at risk of eruption.

GNS Science and the National Geohazard Monitoring Center continue to monitor the Whakaari / White Islands closely for other signs of activity. Mayotte - the three sectors explored by the Mayobs 2 - doC expedition. Journal of Mayotte

Operation Mayobs 2, from June 11 to 17, 2019, aimed at perfecting the knowledge of the submarine volcano off the island of Mayotte, has just made a first assessment.

In summary, three sources of volcanic origin are identified to date.

- South of the latter, a lava flow 2km long and 75 meters high was formed in one month.

- The earthquake swarm remains located about ten kilometers east of Petite Terre but deep, between 20 and 50km in the earth's crust. Above the swarm zone, a probable plume of gas was detected, but without magma shedding. This gas, which comes out a priori of faults, will be analyzed thanks to deep sampling. It does not rise to the surface. 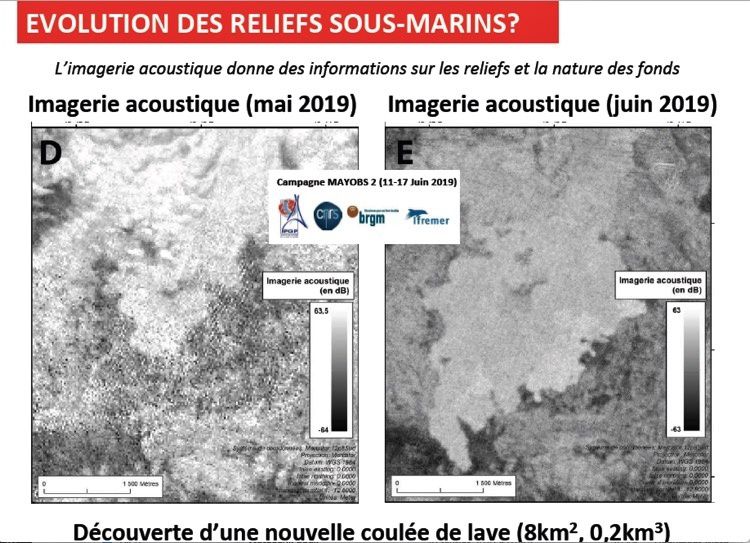 Mayotte - Acoustic imagery of the new lava flow between May and June 2019 / Operation Mayobs 2 - Doc. via Journal of Mayotte