Since 06:03 local time, a seismic crisis is recorded on the instruments of the Volcanological Observatory of Piton de la Fournaise.

This seismic crisis is accompanied by rapid deformation. This indicates that the magma is leaving the magma reservoir and is spreading to the surface. An eruption is likely in the near future in the next minutes or hours.

Further information will follow regarding the area impacted by this magmatic spread to the surface.

The volcanic tremor, synonymous with the arrival of magma close to the surface, has been recorded since 6:35 am local time. According to OVPF records, the source of this tremor is located near the summit area.

No visual confirmation of a start of eruption could be made for the moment on webcams because of bad weather at the top. Nevertheless the presence of a tremor shows the emission of hot and incandescent gas on the surface, which is confirmed by the presence of a plume of visible gas on the webcams.

A reddish plume above the volcanic massif is visible from the coast in the south of the island. The OVPF webcam installed at Piton Basaltes also shows a reddish plume. 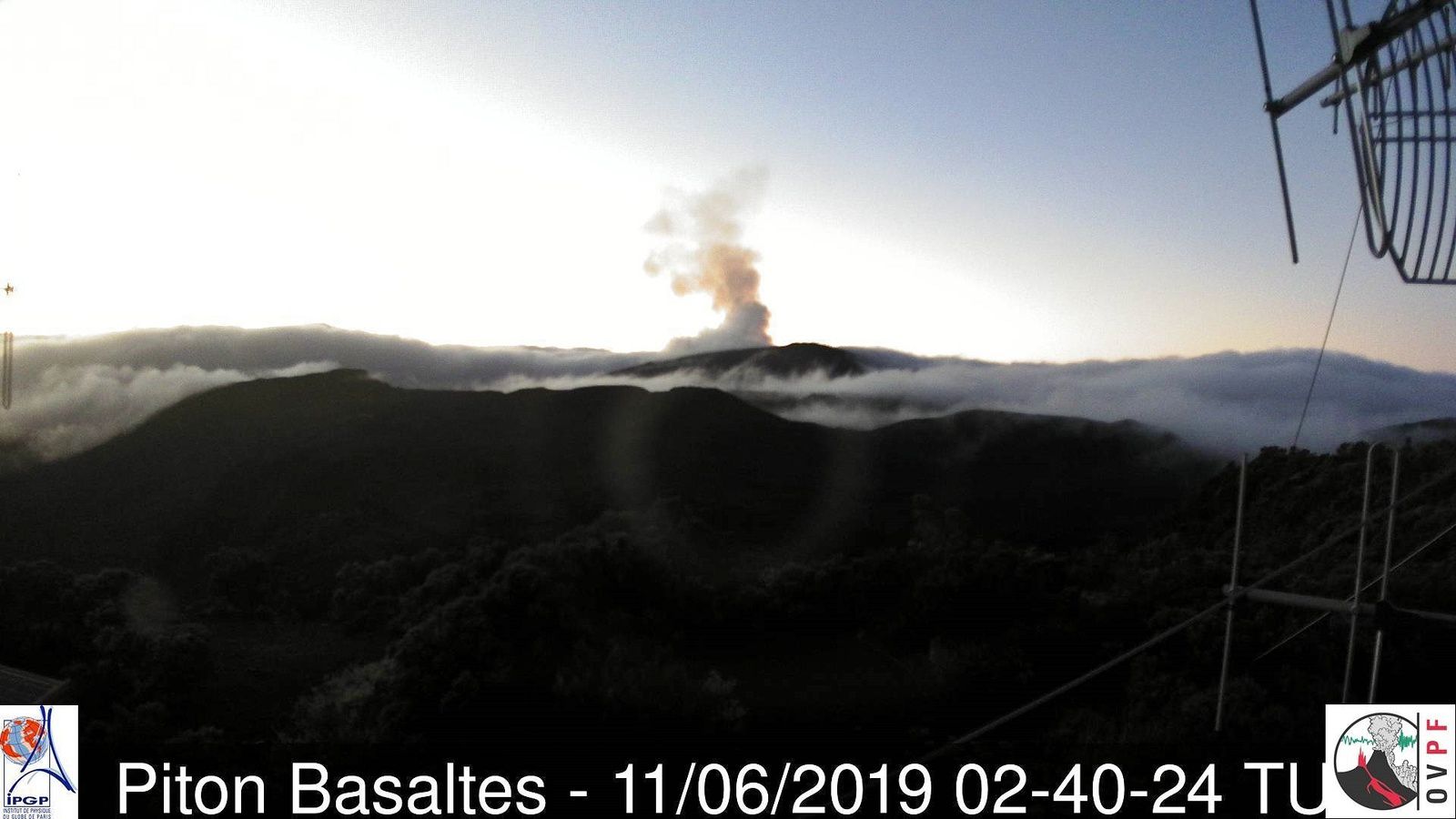 The Prefect decided to implement the alert phase 2-2 "eruption underway in the Fouqué enclosure" of the specific device ORSEC volcano this Tuesday, June 11 at 07:00.

Public access to the Fouqué enclosure, from the Pas de Bellecombe trail or from any other trail, as well as from aircraft in the volcano area, are prohibited until further notice.

Following a reconnaissance this morning (around 09:30 local time), the eruptive site could be confirmed. At least four eruptive fissures opened on the south-south-east external slope of the Dolomieu crater. The cloud cover did not allow to see the presence of other vents especially at lower altitude, nor to locate the front of flows. Lava fountains less than 30m high and well-drained lava flows escaped from the three lowest cracks. The two highest cracks, near "Petit Plateau" were no longer active or in extinction when flying over. A rapid progression of the flows on the east flank was observed because of the steep slopes in this sector. Piton de La Fournaise :  Preliminary mapping of eruptive fissures opened on June 11, 2019 at Piton de la Fournaise. The position of the cracks was estimated from aerial images. A more precise location will be made following an on-site reconnaissance. (© OVPF-IPGP) Gunung Agung erupted in Bali on June 10, 2019 at 1212 WITA, with ash column height observed at ± 1000 m above the summit (± 4 142 m above sea level). of the sea). The column of ash is gray, of moderate intensity, inclined to the east and south-east. This eruption is recorded on a seismogram with a maximum amplitude of 24 mm and a duration of ± 1 minute.

Currently, G. Agung is at Level III / Siaga with an estimated risk zone within a radius of 4 km around Mount Agung G. Crater. The aviation code is orange according to VAAC Darwin. Anak Krakatau, in Lampung, was erupted on June 10, 2019 at 09:06 WIB, but the height of the ash column was not observed. This eruption is recorded on a seismogram of maximum amplitude of 11 mm and a duration of ± 50 seconds.

There was no  thud.

Currently, the Gunung Anak Krakatau is at level II (Waspada) with recommendations: People / tourists are not allowed to approach the crater within 2 km of the crater.