News of Etna, Sabancaya and Kilauea. At Etna, the analysis of the images of the webcams and the field visits, of the 3 of June in the evening and the 4 in the morning, made it possible to observe the continuation of the activity on the eruptive fissure at the altitude 2,850 meters .

The explosive activity has decreased, and the spattering reaches about ten meters high. The active lava fronts are located between 2,500 and 2,300 meters approximately.

The amplitude of the tremor seems to have stabilized after a decline on May 30 in the morning, and a small rise on June 4.

The INGV used a drone to obtain images of the eruptive site, which will be used for the mapping of new flows, and measurements were made at the thermal camera at the eruptive exit. Sabancaya's activity in Peru is continuing this week at moderate levels.

Between May 27 and June 2, 2019, 949 earthquakes of volcanic origin were counted, with a major percentage of events related to the movements of magmatic fluids.

An average of 17 low to medium intensity daily explosions are recorded, accompanied by ash plumes up to 3,500 meters above the summit, scattering over a large eastern sector.

Twelve thermal anomalies, between 6 and 35 MW, have been identified by satellite, and the deformation does not show significant anomalies.

The alert level remains in Naranja, with an inaccessible area of ​​12 km radius. 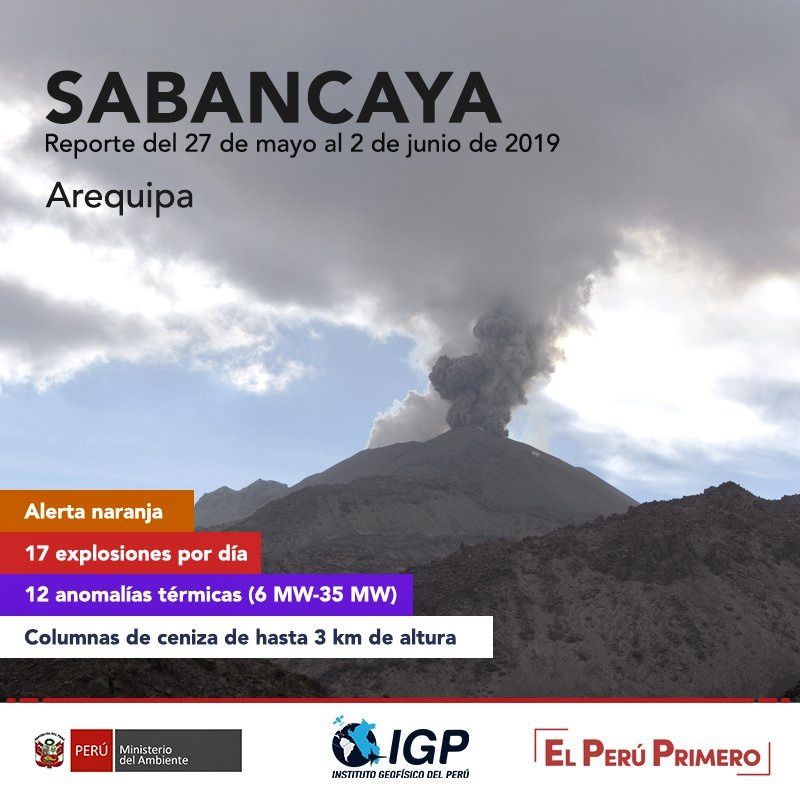 Since the beginning of March, GPS stations and inclinometers located at the top of Kīlauea have recorded a deformation corresponding to a slow accumulation of magma in the shallow part of the magma system at the summit of Kīlauea (1 to 2 km below ground level). However, the gas measurements have not yet indicated a significant decrease in the melt volumes. The HVO continues to closely monitor gas production at the Kīlauea Summit and the East Rift Zone to detect significant changes.

Further east, the GPS stations and the inclinometers continue to display movements consistent with the filling of the deep magma reservoir of the East Rift Zone in the vast area between Pu'u'Ō'ō and Highway 130. This trend has been observed since the end of the eruption of 2018. indicates on the inclinometers that this motion has slowed during the last two weeks. Although the importance of this trend is unclear, the monitoring data do not suggest any imminent change in volcanic risk in this area. Kilauea - On June 3rd, an HVO field geologist went to the site of Webcam Fissure 8 in the Lower East Rift Zone of Kīlauea Volcano, to change the batteries of the webcam and visually observe the cone and the inside of the fissure 8. No steam or fumes were visible and only a slight smell of sulfur was detected momentarily. - USGS image by C. Parcheta.

There are still dangers in the eruption zone of the Lower East Rift Zone and at the summit of Kīlauea. Residents and visitors near cracks, lava flows and the collapse of the summit in 2018 should consider Hawaii County's warnings of civil defense and civil defense. The Hawaii County Civil Defense reported that the lava flows and features created by the 2018 eruption are mainly on private property and that people are encouraged to show respect not to enter or park on private property.

The Hawaiian Volcano Observatory continues to monitor seismicity, deformation and gas emissions closely for signs of increased activity in Kīlauea. The HVO provides visual surveillance of the volcano with web cameras and occasional field visits. The HVO will continue to publish a weekly update (every Tuesday) until further notice and will issue additional messages based on changes in activity.