Activity of Etna, Ubinas and Manam. The National Institute of Geophysics and Volcanology, Observatoire Etnéen, reports that the intense Strombolian activity at the new crater South-East (NSEC) of Etna, which had resumed the afternoon of July 19, suffered a drop brutal between 20:10 h and 20:15 h. UTC, to stop at 20:30 h.

During the night, the rate of lava emission from the effusive mouth on the north side of the NSEC, and the lava fronts that were at about 2200 m stopped and are being cooled. However, although at a very low rate, the effusive activity continued, and at 21:30 h 21:30 UTC started a very large emission of ash from the Northeast crater (NEC) duration up to at 02:25 UTC this 20th of July. During the night, there were also some small explosions at the NSEC.

As of 03:30 am UTC, the visual and thermal surveillance cameras recorded a further increase in explosive activity at the NSEC. Since then, this activity has continued with fluctuations between Strombolian explosions and ash emissions; the emission of lava from the effusive mouth on the north side of the NSEC continues. Currently, the active flows are in the upper part of the Leone Valley, around an altitude of 2600 m. Emissions of ash from the new mouth and the SEC are also observed.

This activity disrupted the operation of Catania International Airport this Saturday. 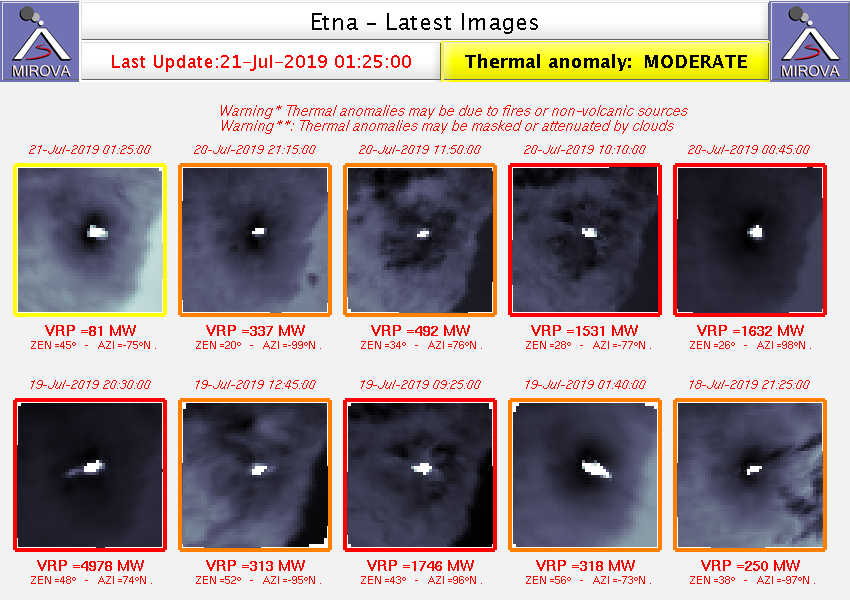 Following the eruptive activity of the Ubinas, the ashes issued on July 19 reached the Mato Grosso in Brazil on the 20th, according to the LAPIS / Laboratory of Analysis and Processing of Satellite Images; they are likely to interfere with air traffic.

The Peruvian authorities ordered on Friday the evacuation of hundreds of people living near the Ubinas volcano in southern Peru, after two explosions and a rain of ashes and gas. The evacuation was decided after the announcement by the Geophysical Institute of Peru (IGP) of raising the level of volcanic alert from yellow to orange. About 15,000 people are exposed to ashes within a radius of 30 km. 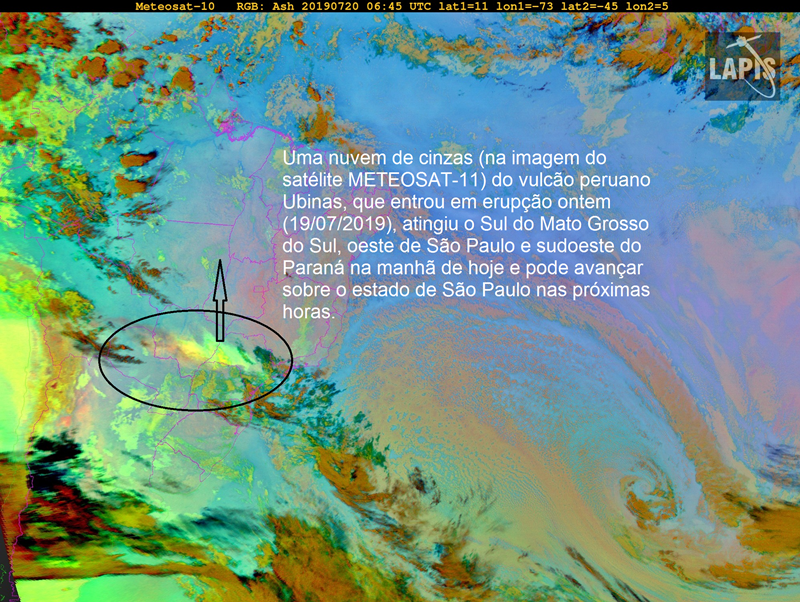 Explosive activity continues on Manam, Papua New Guinea; an ash plume reached this July 20 a height of 4.300 meters (flight level 140), extending to the southwest, according to VAAC Darwin / Himawari-8. The aviation code is red.

On the Sentinel 2 image of July 19, there is a hot spot, a plume of gas and ash, and another, bluish, probably loaded with SO2.