According to Ineter, an explosion occurred on Sunday, July 21, in the afternoon in the crater Santiago of Masaya in Nicaragua, famous for presenting one of the few visible lava lakes in the world, accessible by car.

According to official reports, the ashes released did not cause injuries to people who were near the crater and did not pose a problem for neighboring populations, but the authorities did not rule out any additional activities. The Masaya Park has been temporarily closed.

"This is a low-energy event that occurs when one of the crater's internal ducts becomes clogged and holds high-pressure gases, which accumulate energy to produce an explosion, expelling ashes, and sometimes rocks ", according to Ineter. At Villarica, POVI reports high levels of incandescence and the expulsion of lava flaps, revealing the extrusion of a small volume of juvenile magma from the depths.

Such a phenomenon was observed in July 2018. The Ubinas activity is supervised by the IGP teams

An explosion on July 22 around 11:25 pm projected incandescent materials. The ashes spread over more than 10 km. to the villages of Ubinas, Lloque and Chojata districts.

The cloud of sulfur dioxide, injected during the eruption of July 19 at altitude, was conveyed by the jet stream in the southern hemisphere in three jous from Peru to Madagascar. The SO2 amounts are around 0.1 Tg (Sentinel 5P Tropomi measurements, via Simon Carn) Satellites attest to thermal anomalies that still mark Stromboli on 22 and 23 July 2019.

The hot spots at the top and in the Sciara del Fuoco are detailed on the Sentinel 2 image. 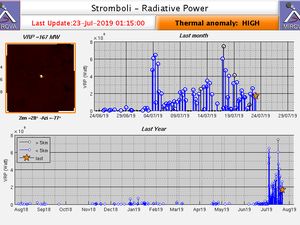