Explosive and effusive activity at the NSEC of Etna.

The National Institute of Geophysics and Volcanology, Etna Observatory, reports that monitoring and surveillance systems have detected a sudden increase in the average magnitude of the volcanic tremor from 05.30 h. UTC.

This increase continued with steady growth until 08.15 h. UTC, the surveillance cameras showed intense branching gas emissions at the base of the south side of the new crater of the Southeast and signaling the opening of an eruptive mouth. From 09:20 h. UTC, a further increase in the average magnitude of the volcanic tremor was observed, accompanied by explosive activity located on the new crater of the Southeast. Explosive activity resulted in the formation of a dense ash-rich gas plume that dispersed, pushed by the wind, on the eastern part of the volcano, at a maximum altitude estimated at about 4500 meters at sea level. 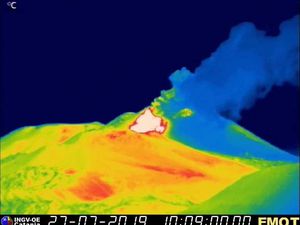 At 11:10 UTC, INGV field team staff reported that explosive activity affects the entire extent of the eruptive fissure, which extends from the NSEC summit to its southern base. The explosions succeed each other without a break in continuity and generate dense emissions of volcanic ash. From the southern part of the eruptive crack emerges a lava flow that extends to the southwest and to the south.

At 11.35 UTC, the most advanced wiping front had reached and passed the northern base of the Barbagallo Mountains, at about 2.850 m at sea level, with a spread towards the bottom of an area between the Frumento Supino mounts and pyroclastic cones from 2002-2003.

With regard to the deformation, one records at the same time as the increase of the tremor, slight variations of inclination at the top stations of the crater of Piano (about 2 MRAD) and Pizzi Deneri (some tenth of microradiants). GPS stations show no significant variation. 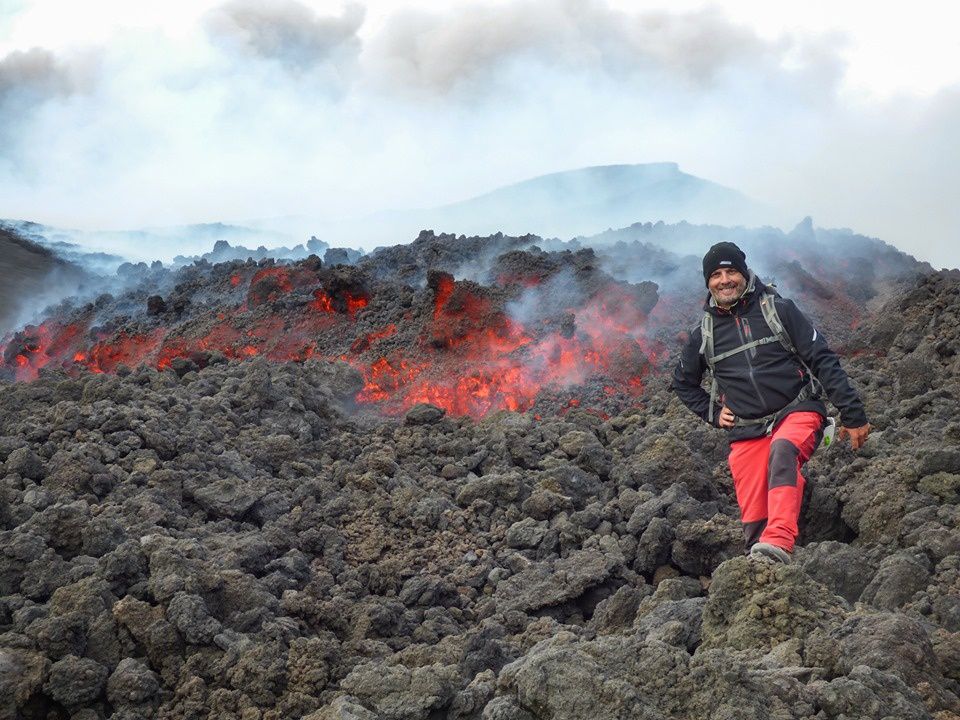 At 12:21 UTC (1421 local time), a sequence of powerful explosions occurred at the NSEC, producing a cloud of ash rising 7.5 km above sea level. At the same time, eruptive activity continued without notable variations in the area adjacent to the "saddle cone" (active in January-April 2017) and on the southern flank of the NSEC.

Around 2 pm UTC, the INGV personnel present in the summit area informs that the lava flow is well fed and is developing rapidly, with a front advancing rapidly towards the valley, after having passed the pyroclastic cones of 2002-2003. A helicopter flight by Joseph Nasi / Butterfly helicopters, around 16:30, reveals the activity spread between the "saddle cone" of the new southeastern crater and the two fractures to the south and southwest. The explosive activity continued in the evening from the two mouths immediately under what is known as the "Cone of saddle" (active between January and April 2017), and activity of "Spattering" and emission of lava of two fracture on the south and southwest sides of the new south-east crater. This activity is similar to some of the eruptive episodes of the March-April 2017 period, but the most advanced lava flow has developed much more rapidly between the 2002-2003 cone (monte Barbagallo) and the old cone of monte Frumento Supino . (Boris Behncke) 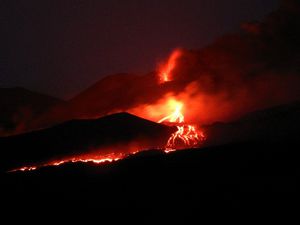 Etna NSEC - Activity in the evening of 27.07.2019, view of the Zona Milia, sopra the abitato di Ragalna - INGVvulcani photos - one click to enlarge 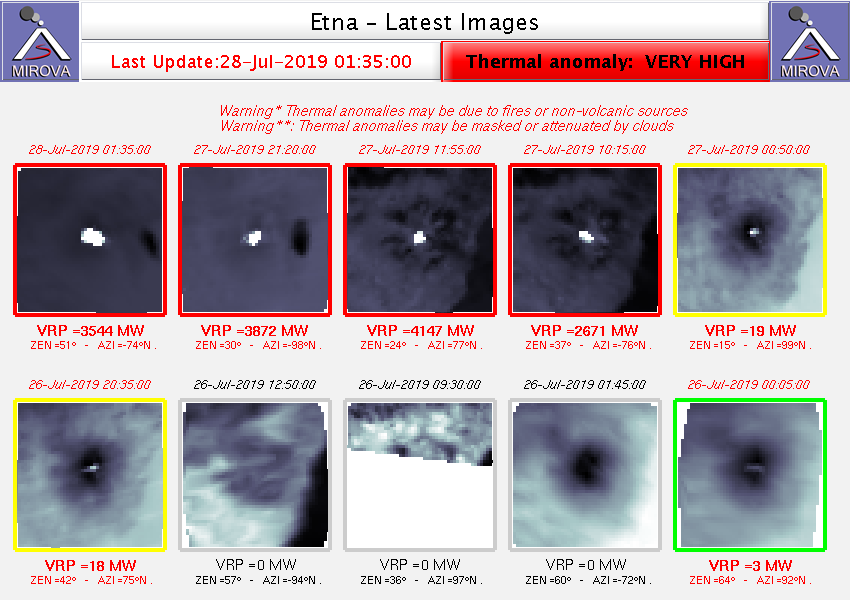 The situation, not commented, seems to have calmed down: tremor downing, and emission of ash a little less important, on webcams.