News from Merapi, Sabancaya, Mayotte and Steamboat geyser at Yellowstone. The Merapi dome, in activity level 2 / waspada on Java, continues its build-destruction cycles.

Blocky avalanches are recorded, as well as a pyroclastic flow on August 27 at 18:09 WIB. The latter traveled 2,000 meters in the drainage towards Kali Gendol, and left a seismographic imprint of maximum amplitude at 70 mm and a duration of 198 seconds. In Peru, Sabancaya's activity remained at a moderate level during the week of August 19-25, with an average of 18 explosions per day, accompanied by ash plumes reaching max. 2,400 meters above the top of the volcano, and dispersed to a sector South and East.

Thirteen thermal anomalies, ranging from 3 to 30 MW, associated with the presence of a hot magmatic body near the surface and explosions, were recorded.

At the seismicity level, 2,187 volcanic earthquakes are recorded during the week, most of them associated with magmatic fluid movements. A first bulletin summarizing the observations, measurements, and preliminary conclusions on the seismic-volcanic activity recorded by the Volcanological and Seismological Monitoring Network of Mayotte (ReVoSiMa) which relies on the data of the stations of measurements on land and in sea, was issued.

This network is operated by IPGP with the support of BRGM Mayotte. ReVoSiMa is supported by the Volcanological Observatory of Piton de la Fournaise (OVPF-IPGP), IFREMER, CNRS-INSU and BRGM. The data from this network are produced by a large consortium of scientific partners and funded by the state. 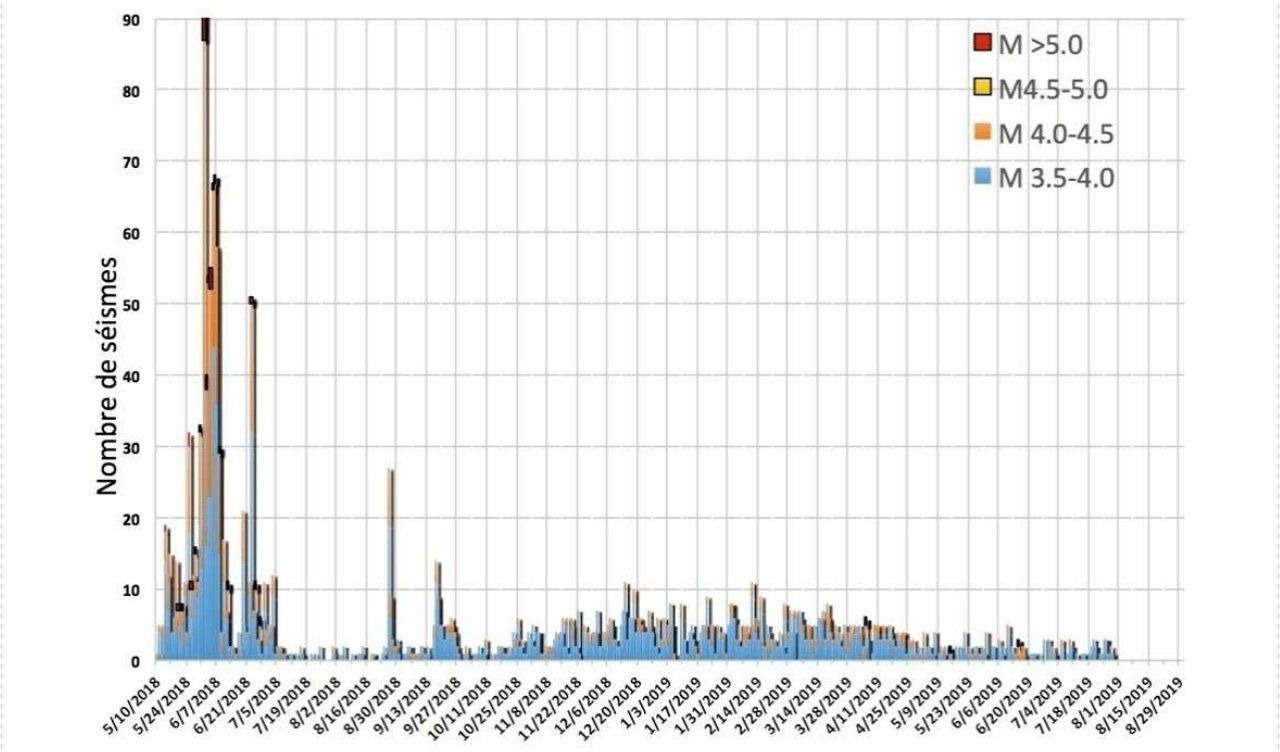 No significant evolution during the last month, main seismic activity still concentrated at 5-15 km from Petite-Terre, at depths of 20-50 km. A lower seismicity in number and energy (low magnitude between 1 and 3) is also still recorded near Petite-Terre about 5 km to the east (at depths of 20-50 km), as well as the data. sea-bottom seismometers have shown this since February 2019.

Source: Journal of Mayotte - Newsletter n ° 1 of the volcanic-volcanic activity in Mayotte - link At Yellowstone, a new record was broken with the 33rd water eruption of the year 2019 at Steamboat Geyser on August 27 at 10:47 am NDT. Its seismic footprint lasted 30-60 minutes.

About 90 minutes, an increase in the discharge is recorded at Tantalus stream gage.