Due to poor weather conditions since the start of the eruption, no reconnaissance could be done on site.

The glow observed from RN2 in the Grand Brûlé and the few observations of this night and today confirm that the crack(s) opened on the east flank, south-east inside the Enclos Fouqué, in the upper part of the Great Slopes, as the tremor maps show since the beginning of the eruption. 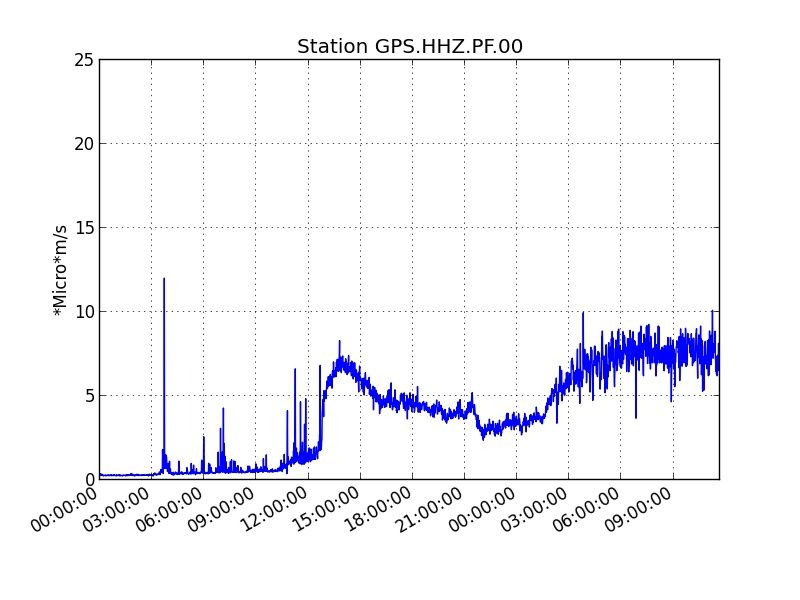 At 15:00 local time, a gap in the cloud cover allowed to see the lava front from RN2; it had reached an altitude of about 1000 m (± 200 m, given the uncertainties associated with remote observations).

Around 17:10 UTC, the situation is clear: there is not one but two lava flows that are active in the Great Slopes. The first, the most north, comes from the crack opened yesterday ... but it seems to be no longer fed ...

But the eruption continues a little further south, on a new crack that seems to have opened about 1 km from the previous one and about 1.5 km from the ramparts of the Tremblet. Located near the crater of Bonnet ( eruption 1976), at 1500 m altitude, this crack feeds a lava flow that goes down fairly quickly. At Santiaguito / Guatemala, a white degassing overcomes the cone and disperses to the southwest; 2 to 4 weak to moderate explosions are recorded per hour, accompanied by ash plumes at 3,200 meters asl.
These volcanic ash and outgassing columns are dispersed to the southwest and are also characterized by a low ash drop on the volcanic perimeter, generating low and moderate avalanches along the eastern flank that cause the displacement of materials. on his way. In Chile, the POVI reported on August 12 a collapse of a segment of the eastern edge of the crater of Villarica under the weight of snow, based on zenith images of Sentinel / Copernicus, and images from the ground.
It further informs, as seen in the two upper images, that the diameter of the heat surface at the bottom of the crater / lava lake has halved between 9 and 12 August (Sentinel SWIR images processed). Villarica - evolution of the crater rim and the diameter of the lava lake between 9th and 12th August 2019 (photos from the top / Sentinel Copernicus) - traces of the collapse (bottom photo, red arrow) - Doc.POVI