After erupting on July 26, 2019, Tangkuban Parahu's activity was dominated by gas and ash emissions at a height of 20-200 meters above the bottom of the main Ratu crater.

- On August 1st, at 8.46 pm WIB, the eruptive activity resumed, characterized by a plume of gray ash of 180 meters; its max amplitude imprint 50 mm (scale exceeded) was recorded for 11 minutes 23 seconds.

- On August 2 at 0:43 WIB, a new phreatic eruption occurred; the recording lasted 3 minutes 6 seconds, with a maximum amplitude of 50 mm.

In addition to the tremor, low local inflation and an increase in the concentration of volcanic gases are measured.

Due to the instability of the volcano, and the different parameters analyzed, the level of activity of the Tangkuban Parahu has been increased to 2 / waspada, together with a forbidden zone of 1,500 meters radius around the active crater. 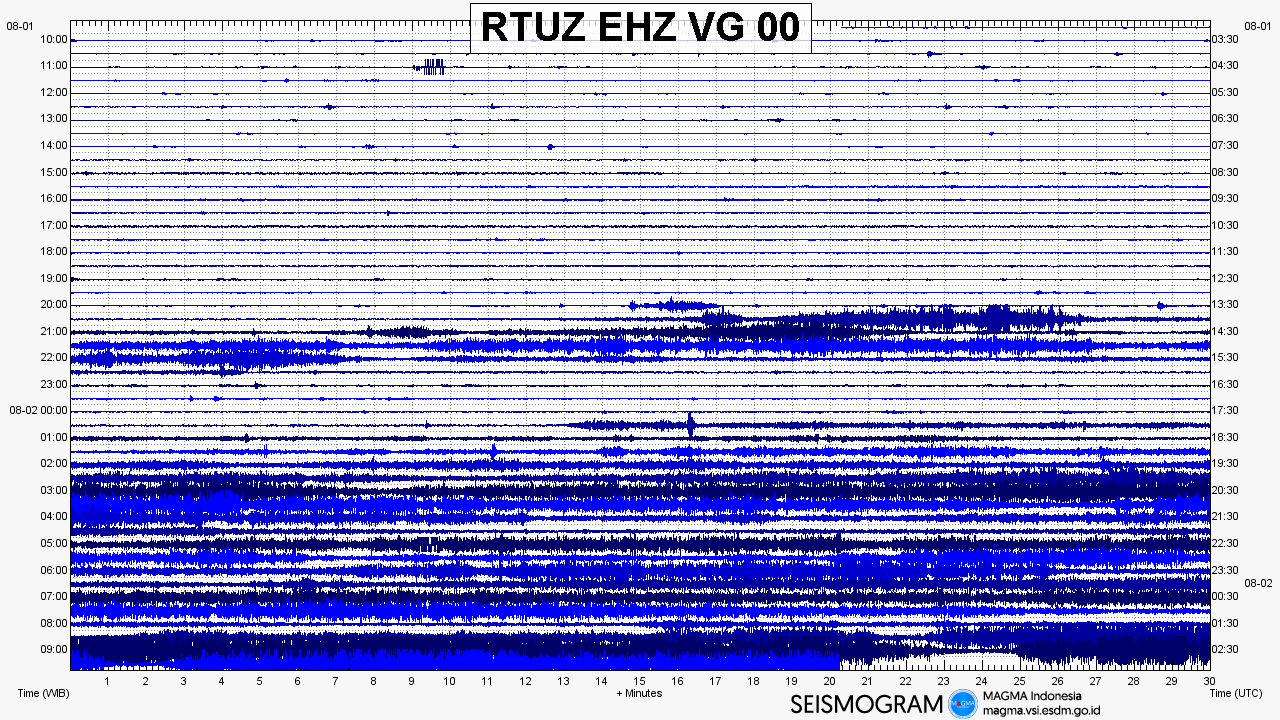 The OVPF gives details on the activity of Piton de La Fournaise in its newsletter of July.

On 29 July2019, at 05h13 local time (01:13 UT), a seismic crisis, witnessing the rupture of the roof of the superficial magmatic reservoir (under pressure inside) and the final spread of the magma towards the surface, is recorded . In total, 1099 shallow volcano-tectonic earthquakes (<2 km deep) were recorded on 29 July. This crisis was accompanied by rapid deformations of the soil, of the order of 12-13 cm on the western edge of the crater Dolomieu.

The tremor, synonymous with the arrival of magma close to the surface, appeared around 8:00 am UT (12:00 pm local time, Figure 9) on July 29. The eruptive activity was characterized by the opening of 3 cracks on the northern flank of the volcano, 600 m from Formica Leo, on a total length of about 450 meters near the tourist trail leading visitors to the summit." " In-situ thermal images and measurements as well as lava samples were taken by the OVPF teams on 29 July. The maximum temperature, measured at the base of the lava fountains by infrared images and at the front of the lava flows using a thermocouple, was 1100 ° C.

The surface flows estimated from the satellite data, via the HOTVOLC platforms (LMV, OPGC, University Clermont Auvergne) and MIROVA (University of Turin), were of the order of 21 m3 / s and 4.5 m3 / s in the beginning of eruption. Over the entire eruption platform HOTVOLC estimated an average flow of about 11.6 m3 / s.The eruption stopped on July 30, 1919 around 04:30 local time after less than 24 hours of activity and the installation of castings over a maximum length of about 730 m." A 1 August 12th Sentinel 2-band image reveals the hot spots at the top and the large area affected by the fires that followed.