In Kamchatka, the growth of the Sheveluch dome continues, accompanied by incandescent and pyroclastic flows of avalanches, and an intense fumarolic activity.

On September 2, the KVERT reports an ash explosion with a cloud at more than 5,500 meters asl., drifting southeast of the volcano.

The aviation code is orange, this activity may impact international and local traffic at low altitude. The activity of Krakatau is characterized on 2-3 September by five earthquakes of eruption, 2 earthquakes of breath, and continuous tremor of dominant amplitude to 20 mm.

The crater lake is topped by a column of ash 200 meters high, alternating with a white plume of gas and steam 150 meters high.

The activity level remains at 2 / waspada, with an orange VONA. 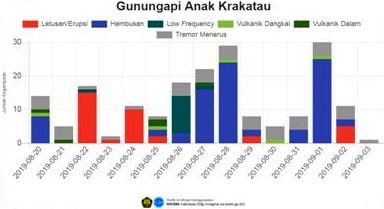 The I.G. Peru reports that during the past week, Sabancaya had moderate eruptive activity, with an average of 26 explosions per day, accompanied by ash plumes up to 2,000 meters above the summit.

During the week, 3312 volcanic earthquakes were recorded, including a major percentage associated with magmatic fluid movements. Eleven thermal anomalies, between 3 and 62 MW, have been identified, associated with the presence of a hot body close to the surface and explosions. In Ubinas, the seismic activity associated with the rise of magma (LP and hybrid earthquakes) and that in connection with the fragmentation of rocks (VT earthquakes) are rising slightly, with an average of 118 to 225 episodes per day, ie a weekly total of 2828 earthquakes.

No explosions were recorded; only a moderate emission of ash is reported on September 1 at 9:45 pm, associated with a tremor signal; On the other hand, the emissions of gas and steam are continuous and reach 1,000 meters above the summit. Three thermal anomalies are reported by Mirova attesting to the proximity of the magma to the surface. In addition to floods and landslides, poor weather conditions in Guatemala have caused lahars to Fuego volcano, in different drainages and Santiaguito volcano,  in Rio Cabello.