As indicated in the update yesterday at 12h local, the eruptive activity at the eruptive site of Piton de La Fournaise, located at 1050 m altitude, was low, with the height of lava projections less than 20 m . Sunday at 8 am, only one active flow was present and was discharging over a distance of less than 200m from the eruptive cone. In its bulletin of 17h local, the observatory means the stop of the activity, or a pause:

- 29 superficial superficial volcano-tectonic earthquakes were recorded during the day yesterday,

- very little lava was emitted on the surface ". At 19h in Reunion 1ère, Aline Peltier evokes a possibility of resumption of the eruption ... " It will be necessary that this magma comes out one day ".

Scientists therefore remain vigilant and do not exclude the hypothesis of a crack out of the enclosure or lower than that of the lava front of the latter eruption.

Since the end of this phase of activity, 2 superficial superficial volcano-tectonic earthquakes have been recorded. No earthquakes were recorded in the area of ​​the eruption. No deformation of the building is no longer perceptible.

Since the end of the eruption the SO2 values ​​have returned to normal (emissions low or close to the limit of detection) and the CO2 fluw remain low in the upper part of the Fournaise and go up in the distant sector. The JMA raised the alert level of the Kuchinoerabujima to 3 / do not approach the crater on October 28, 2019 at 00:15 local.
This adjustment of the alert follows a massive earthquake on October 27 at 21:33, with a hypocentre located near the crater Shindake.
A possible eruption, likely to cause pyroclastic flows, can impact area from the crater  to the coast. 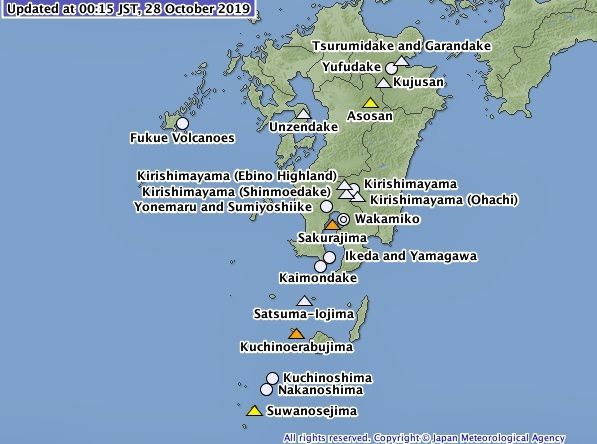 A slight activity still marks Barren Island (since Sept. 25, 2018) in the Andaman Archipelago.

Thermal anomalies are identified by Mirova on October 24 and 27, 2019, when cloud cover allows, and a hot spot is visible on the Sentinel-2 images of October 24th.