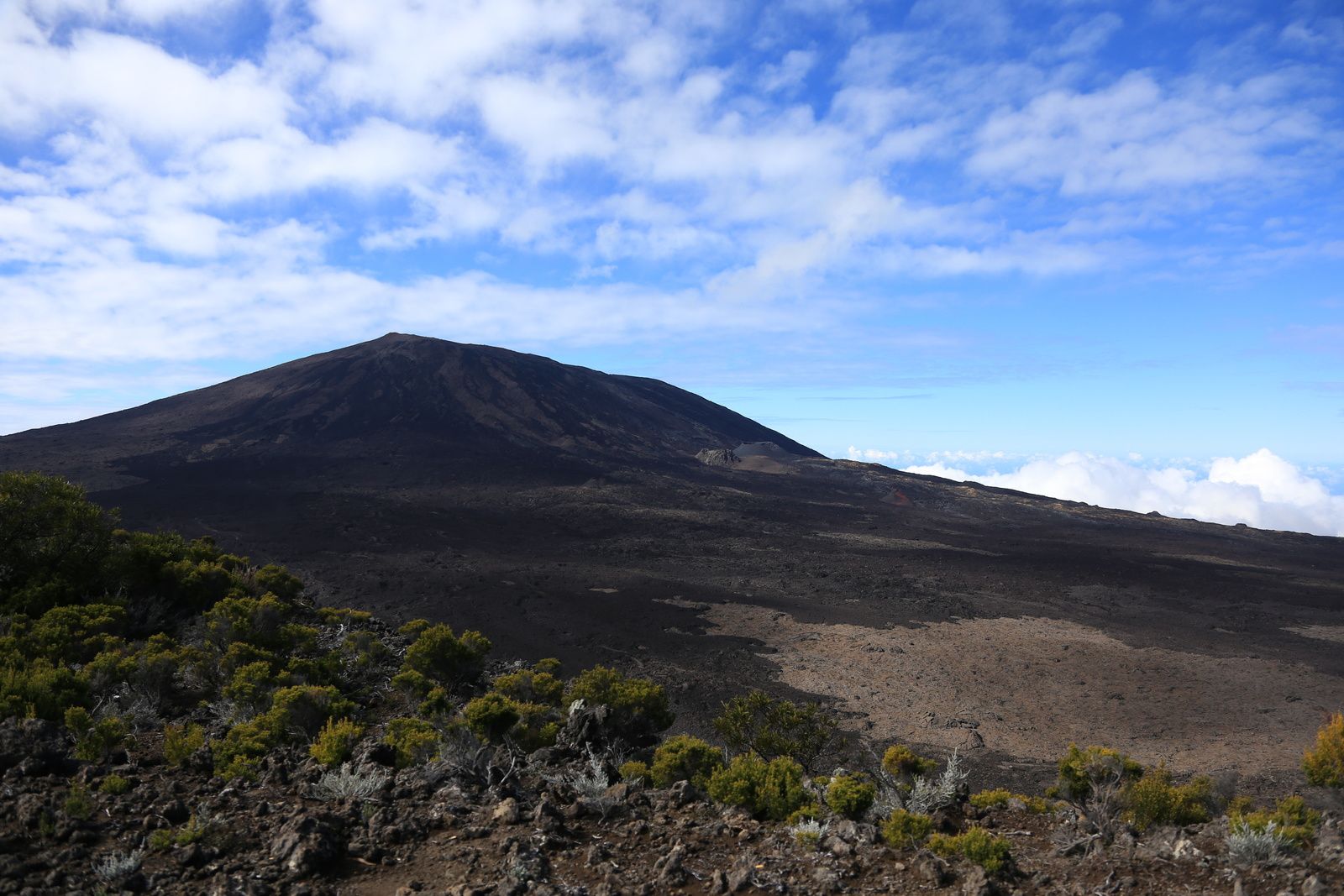 Piton de La Fournaise - Towards a next eruption, or not ? - photo © Bernard Duyck

Piton de La Fournaise plays with our nerves ! Towards a fifth eruption this year, ... or not ?

Since 08:00 pm local time on October 21, a seismic crisis is recorded on the instruments of the Volcanological Observatory of Piton de la Fournaise. This seismic crisis is accompanied by rapid deformation. This indicates that the magma is leaving the magma reservoir and is spreading to the surface. An eruption is likely in the near future in the next minutes or hours.

The surface deformations stopped around 08:30 pm, which meant stopping the magma intrusion in depth.

Following the seismic crisis, the number of earthquakes has greatly decreased since 08:34 pm local time. Piton de la Fournaise - Illustration of the deformation between 22.08 and 22.10.2019 / 05.42. Bases are shown here (variation of distance between two GPS receivers) crossing the Piton de la Fournaise building, at the top (at the top), at the base of the terminal cone (in the middle) and in the far field (at the bottom ) (see location on the associated maps). A rise is synonymous with elongation and therefore swelling of the volcano, inversely a decrease is synonymous with contraction and therefore deflation of the volcano. Any periods colored in light pink correspond to eruptions.

Given the strong seismicity recorded in recent days, no hypothesis is ruled out for the moment as to the following events:

1. recovery of this spread of magma to the surface,

2. new propagation of magma from the reservoir to the surface,

As a reminder, the eruptions of 18 February-10 March 2019 and 03-04 April 2018 had been preceded by an intrusion of similar magma having stopped at depth, respectively 2 and 3 days before the onset of eruption.

The prefect of Reunion decided to trigger the alert 1: "probable or imminent eruption" of the ORSEC Volcano plan, as of this Monday, October 21, 2019 at 21:30. Consequently, public access to the Fouqué enclosure, whether from the Pas de Bellecombe trail or any other path, as well as the helicopter landing in the volcano area, are prohibited until further notice .

The National Gendarmerie and the National Forestry Office have been tasked to ensure the implementation of these security measures on the site. 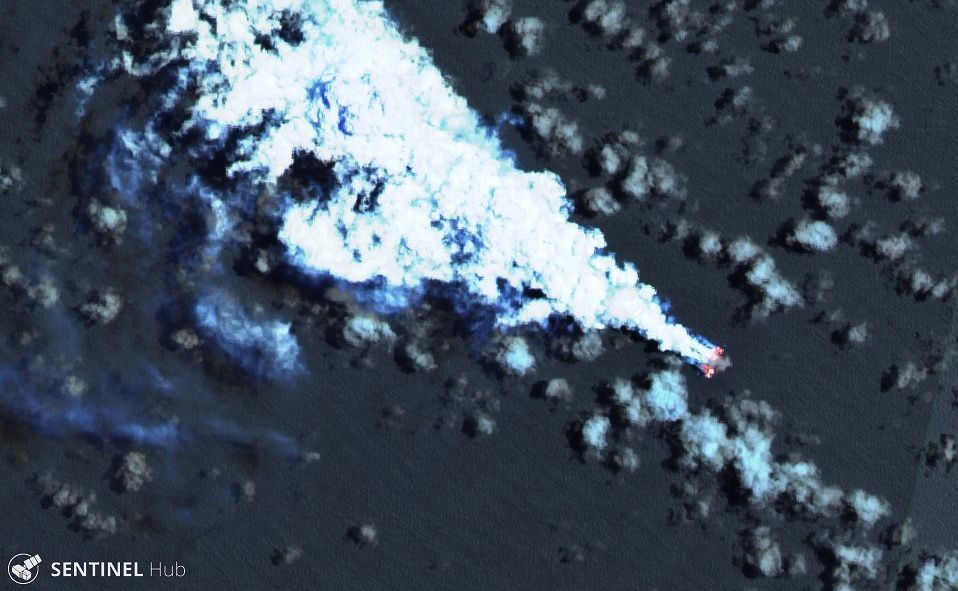 The ongoing eruption at Metis Shoal in Tonga, reported October 13-14, is still relevant. A huge white plume and some hot spots are visible on Sentinel-2 satellite images.

No news in the local press, more concerned about rugby than volcanism. According to the IGPeru, the eruptive activity of Sabancaya remained moderate between 14 and 20 October 2019, with an average of 44 medium to low intensity daily explosions, and ash plumes reaching a high level of 2,500 meters above the summit.

The seismicity is marked by 2084 earthquakes of volcanic origin, of which a major percentage associated with the movements of magmatic fluids. No significant deformation. Fifteen thermal anomalies, between 1 and 53 MW, are associated with the presence of a hot body in the crater. 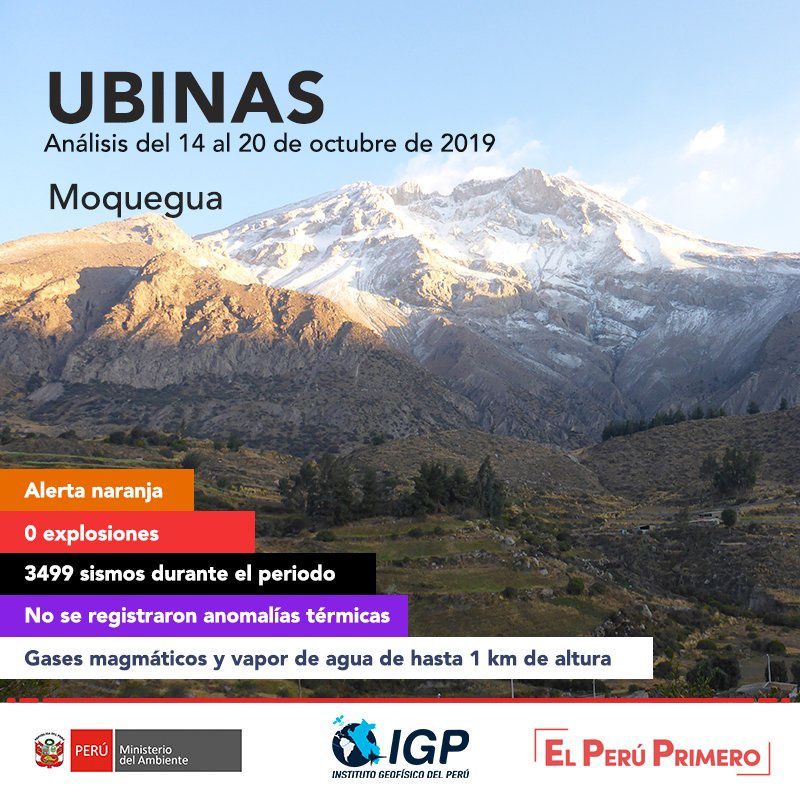 In Ubinas, a decrease in seismic energy associated with the rise of magma and sporadic emissions of magmatic gases and water vapor constitute a scenario where the probability of explosions and / or ash emissions remains low. .. lowering the alert level from orange to yellow is recommended.