On the island of Kadavu, in the Fiji archipelago, the NDMO / Fiji 's disaster management office, urges people not to fish, or to dive in the waters near the coast around the Nabukelevu Volcano, also known as Mt. Washington.

Underwater rumblings and sounds resembling explosions have been heard; the last recorded eruption dates back to 1660.

The warnings follow a magnitude 5.1 earthquake on October 20, followed by numerous aftershocks, which caused debris avalanches to the sea.

Collapses / landslides in Nabukelevu on October 21 after earthquakes 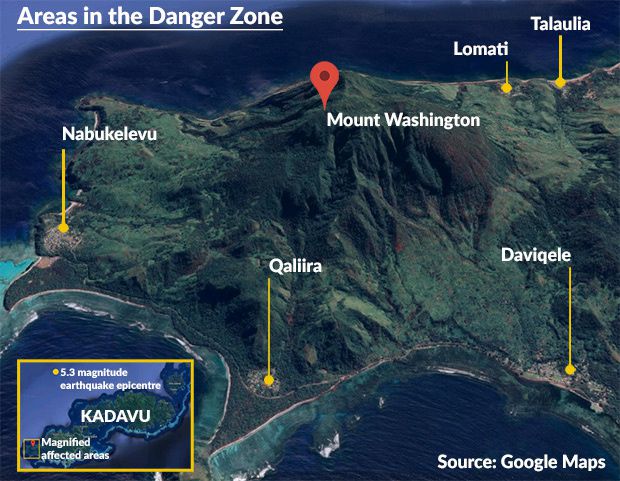 The Nabukelevu lava dome complex, andesitic to dacitic, occupies the southwestern tip of Kadavu. The highest point of the complex is Mt. Washington, an andesitic dome.

Like any composite building in humid climates, Nabukelevu is subject to collapse, a propensity exacerbated by three zones of faults intersecting the complex. Debris avalanches during the end of the Holocene reached the sea on the north and south sides of the volcano. After the eruptions of June 2017 (the most energetic of the current eruptive period (2011-2019), new cracks were identified in the south and south-east walls of the edge of the active crater of the Rincon de la Vieja volcano. the years 2018 and 2019, it was noted that these fractures had increased in length, in aperture and in depth, the largest opening being up to 50 cm, some vertically cutting the walls of the southeast edge of the crater and others being concentric at the southern edge.

A new climb was made on August 28, 2019 to monitor the fractures identified several months ago. Handy structures have been mapped and it has been determined that fractures on the south side are concentric to the crater. The other mapped fractures are the vertical ones found in the wall on the south-east side.

Based on field observations and measurements, it is considered that the main fracture cuts a large part of the southeast wall of the crater (Figures 4 and 5) and generates concentric stress fractures related to the instability of the body. block, concretized by the slow subsidence of the visitor sector on the south flank of the crater. It is recommended to fly over by helicopter or drone to identify other possible fractures; In addition, strengthen the monitoring by installing a GPS to see the movement rate in this block.

A.C. Guanacaste recalls the respect of safety restrictions, braved by hikers in recent months, both for their safety and those of rescuers in case of accidents.

During the last 24 hours, seismographs have recorded several long-lasting earthquakes related to the circulation of fluids (water, steam, gas) in cracks, ducts and fumaroles. The color of the lake is gray-green, indicating the presence of active fumaroles at the bottom of the crater lake. In Poas, the rains of the last days allowed the crater lake to reform. However, the evaporation processes are intense by the geothermal system and could reduce the size of the lake or make it disappear again in the coming days.

A plume rich in water vapor is observed 500 meters above the bottom of the crater.

Seismographs record many persistent LP earthquakes associated with the transport of fluids (water, steam, gas) through cracks, ducts and fumaroles. The MultiGAS on the western edge of the crater has recorded very low levels of SO2, around 1.5 ppm since October 21st.

The SO2 ExpoGAS gas detector located in the visitor's gazebo has repeatedly recorded ambient SO2 concentrations of between 1 and 5 ppm. These levels of SO2 can be harmful when they are already maintained in the order of minutes for very sensitive people or those with pulmonary or cardio-respiratory problems.