In Akrotiri, at least one frescoed room has been found in every house. This characteristic is a testimony to the high standard of living of the inhabitants. They describe sports games or cultural scenes, or everyday life, with landscapes of Santorini or Egypt.

The execution is neat, the details are precise, the natural color spectrum extended. The paintings are started on a coating) wet lime, but finished on a dry support.

The pigments used are ocher and jarosite for yellow, ocher or hematite for red, and Egyptian blue. The contours are drawn in graphite. The colors are used in a united way, without gradients. Akrotiri - frescoes of the House of the Ladies - Museum of Prehistory - photo © Bernard Duyck 09.2019 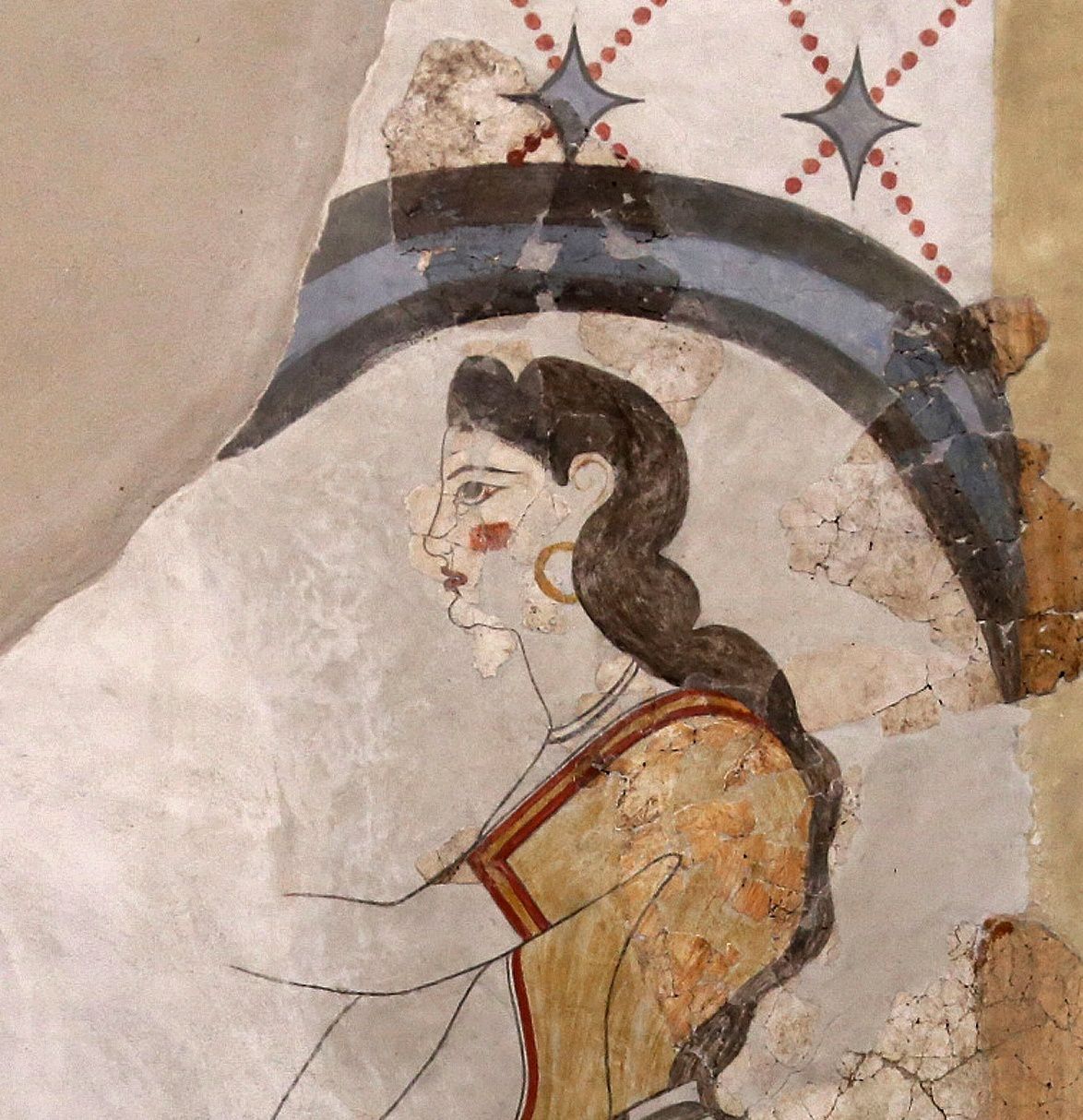 Akrotiri - frescoes of the Maison des Dames - detail about the clothes of a young woman, "the lady with Papyrus" - Museum of prehistory - - photo © Bernard Duyck 09. Akrotiri - frescoes of the House of the ladies - scene of offering to the mistress of house, or to the goddess - photo © Bernard Duyck 09.2019

Frescoes found in the "House of the ladies" :

The storied house was named after the discovery of frescoes with female characters and papyrus, a motif borrowed from the Egyptian cult of the goddess Hathor.

Another fresco depicts the preparation of a ceremony by the mistress of the house; A lady wears heavy breasts, belonging, according to Marinatos, to a married matron.

These female figures, of different ages, represent a female feminine community of Akrotiri, during a ceremony of offerings to the goddess.

Women wear either a colorful skirt down to the ankles and a blouse with sleeves to the elbow, or a short-sleeved dress, low-cut well below the breasts. The clothes are woven and often adorned with bands. Akrotiri - Xeste 3 - fresco of the Mistress of animals - Doc. Marinatos

Frescoes of "Potnia Theron", the Mistress of animals and crocus collection in bloom.

Decorating a wall on the second floor of the house Xeste 3 / room 3, a girl, the skull partly shaved (gray head) leaving a few locks of long hair and festive clothes, picks crocus flowers on a hill.

This collection shows a significant economic activity, and the trade of saffron. This fresco represents the human level of society ... the divine level is depicted in another part of the floor, with the offering of the pistils to the great goddess, sitting on a podium and holding a winged griffin on a leash. A monkey offers him a handful of crocus, while a girl prepares another basket with flowers. No direct contact between humans and the goddess. We find monkey and griffin on murals of Knossos.

This house is considered a place of initiation and rites of passage, because of the layout of the place and the various frescoes. 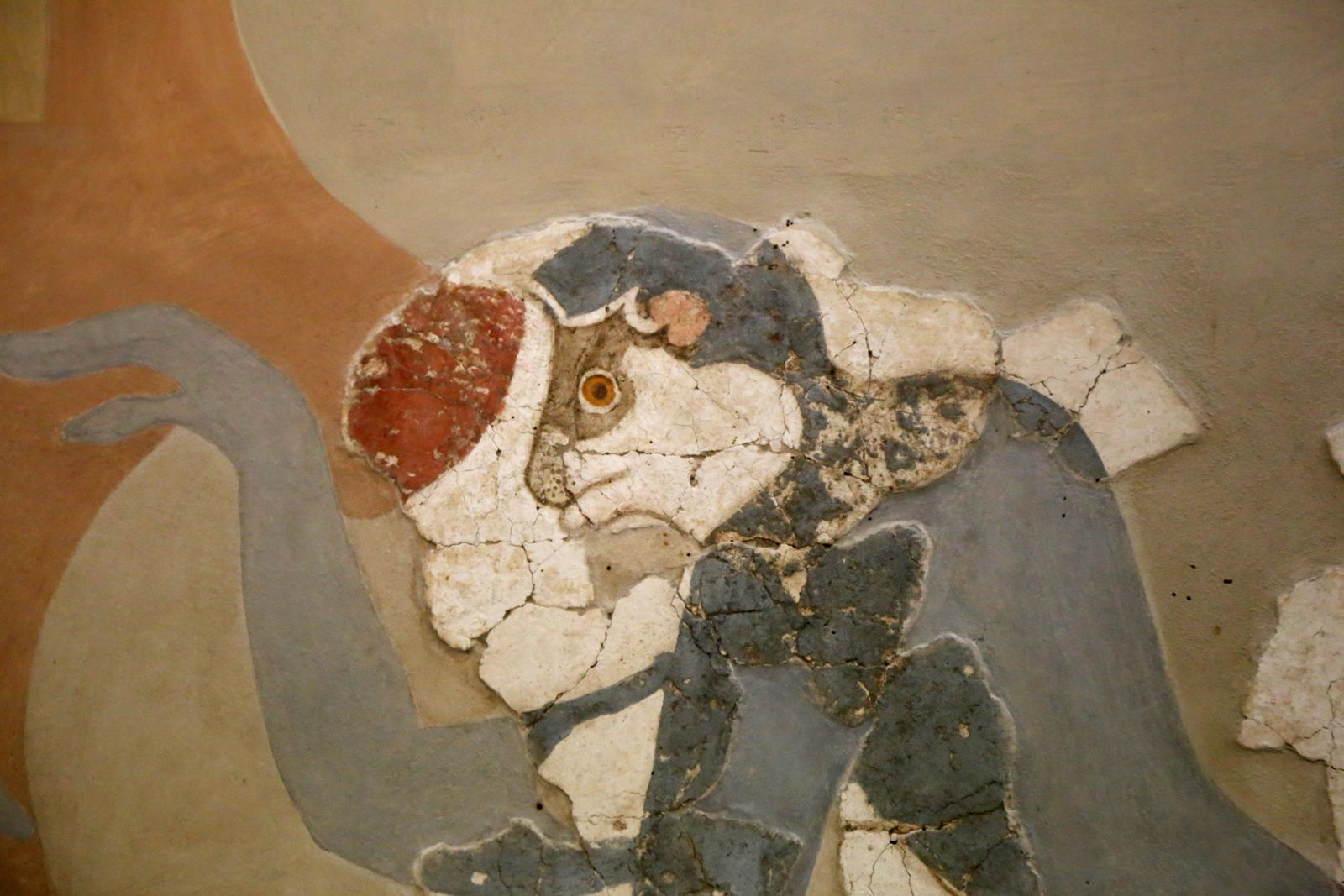 Fresco of the room of the blue monkeys (room B6)

The theme of the fresco, which decorates the Beta room, is the celebration of nature.

In a landscape depicting the nature of Thêra -  water in the bottom, rocks, and trees - the monkeys are represented in a composition, in various poses, with an impression of movement corresponding to their natural attitude, suggesting that the painter was able to observe directly these monkeys, imported from the eastern Mediterranean.

In Knossos we find a similar fresco, proof that both islands were occupied by men and women of the Minoan civilization.

- Akrotiri - Thera and the Mediterranean - by Nanno Marinatos / Edit. Militos