The Sernageomin / OVDAS raised the alert level of the Copahue to orange, following the recording on webcams this 1° October from 9:45 local a gray plume formed of fine particles, associated with minor explosions at the crater, and also detected by infrasonic equipment.

On the other hand, the earthquakes VT, in relation with the movements of fluids, with epicentres to 6 km of the crater El Agrio, continue.

These processes could be related to an overpressure of the hydrothermal system and a destabilization of the deep magmatic system. Etna - from left to right, fumaroles at SEC, ash emissions at Voragine and NEC 01.10.2019 - © ️Photo Credit: Gianni Pennisi via Etnativo

At Etna, a pulsating ash emission is observed at craters Northeast and Voragine this October 1, 2019. It has intensified since 8:50 GMT on webcams images.

The INGV reports that the amplitude of the tremor does not show significant variations from the previous days. Ulawun's activity has been sustained and, as Christopher Lagisa points out,

" just when we thought activity was starting to dissipate, the main crater bursting out, let's hope that only one vent is active and that a new thrust will not develop.The plumes, although they appear dark on the photo, are in fact white (gas and vapor)" -  (an effect of the backlight in the photo) . 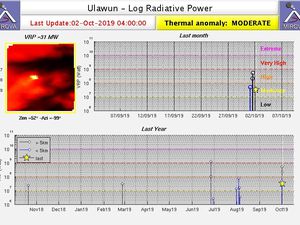 Ulawun - a single vent seems active at the foot of the cone - Chris photo. Lagisa / Facebook The month of September 2019 will have been marked in the Piton de la Fournaise by a low seismicity under the summit craters and a stop of the inflation of the building. This shows the stopping (or at least slowing down because an increase in CO2 concentrations at the top is still observed) of the magmatic transfers from the deep zones to the more superficial zones.

The seismicity under the Piton de la Fournaise during the month of September 2019 therefore remained low with an average of a superficial volcano-tectonic earthquake per day. Four deep earthquakes have also been recorded under the eastern flank. 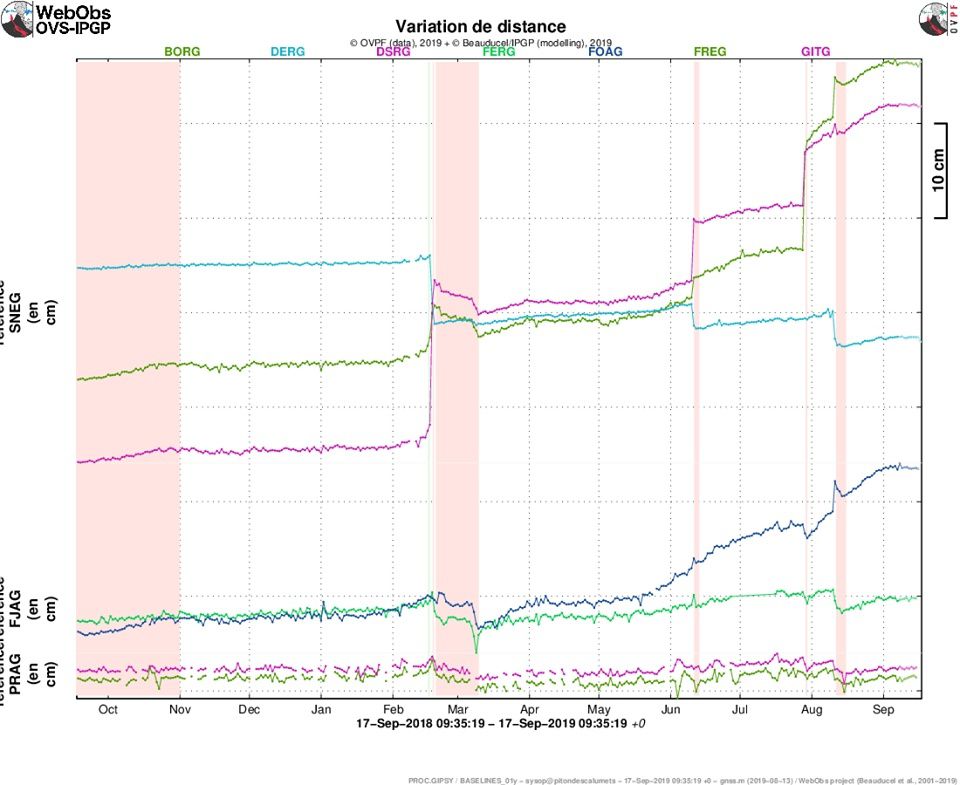 Piton de La Fournaise - illustration of the deformation over the last twelve months (the eruptive periods are shown in red). Here are represented the variations in distance between two GPS receivers crossing the Piton de la Fournaise building at the top (reference SNEG above), at the base of the terminal cone (reference FJAG, in the middle) and in the far field (reference PRAG, at the bottom). A rise is synonymous with elongation and therefore swelling of the volcano, inversely a decrease is synonymous with contraction and therefore deflation of the volcano (© OVPF-IPGP).

Inflation (swelling) of the building that had resumed following the end of the eruption of 11-15 August 2019 stopped in early September 2019.

No eruptive activity was observed during the month of September 2019.