Activity of Chapparastique, Popocatépetl and Askja. From the first week of October, the seismicity recorded via the seismic monitoring network of the San Miguel volcano began to change gradually and has been maintained to this day. This change is associated with larger impulse events, highlighting the presence of small fractures in the duct of the volcanic system.

The state of volcanic activity is not considered a danger in the very short term, but it indicates that there are variations in the equilibrium conditions of the system.

The images captured by the volcanic camera, located in the Pacayal volcano, do not show the presence of gas or vapor from the crater. At Popocatépetl, 64 exhalations were identified, accompanied by gas and sometimes slight amounts of ash during the last 24 hours. The most important ones were presented on November 9 at 08:58 and 09:41., both at a height of 2 km northwest ;

an explosion occurred at 09:23, between the last two exhalations. In addition, 52 minutes of tremor were recorded.

As of today morning and at the time of writing this report, the steady emission of volcanic gases scattered to the northwest is observed.

This activity is part of the Amarillo fase2 alarm. In Iceland, a seismic swarm marks the Askja volcano since the beginning of the week from 04 to 10 November. The Magnitude 3.4 strongest  earthquake occurred on November 9th at 9:36 pm.

More than 200 earthquakes have marked a north-south fault.

The cause of this seismic activity is not well identified: in relation to a tectonic activity, or with a dyke injection.

The volcanic system of the Askja, 190 km long and more than 20 km wide is part of the northern volcanic zone, and consists of a central volcano, culminating at 1,510 meters asl. and containing a complex of calderas, the youngest of which is Öskjuvatn, occupied by a lake, and a swarm of fissures.

The type of activity that marks these cracks is either effusive or explosive type phreatomagmatic. The last eruption dates back to 1961, and was effusive. 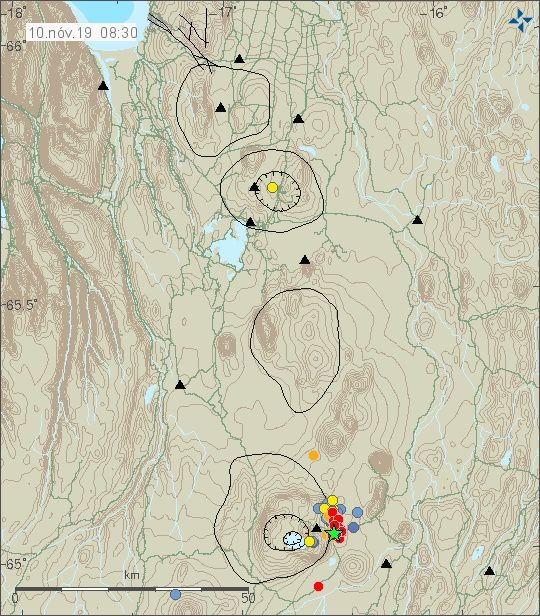