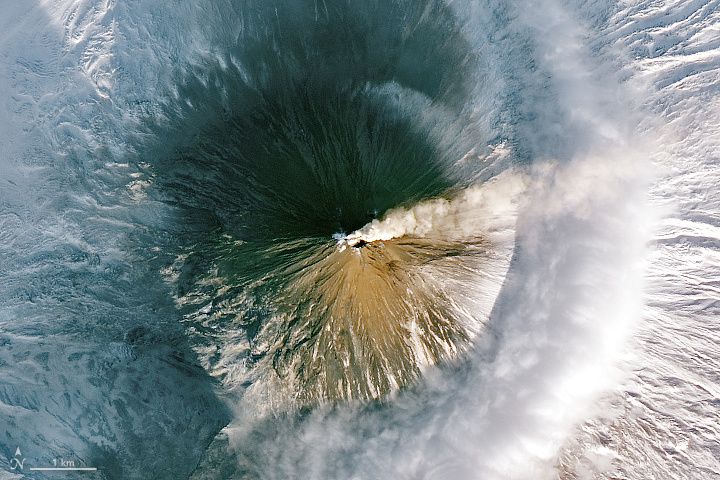 In Kamchatka, a moderate eruptive activity continues on 20 and 21 November 2019 in Klyuchevskoy.

VAAC Tokyo issued seven ash explosion reports for November 21, where the ash plume reached an altitude of 7,000 meters, before drifting southeast of the volcano. In El Salvador, during the past week, the seismicity of the Chaparrastique volcano has tended to decrease.

The number of earthquakes and their frequency has been reduced. The seismicity of the volcano has a certain degree of impulsiveness, due to the presence of small fractures and cracks in the volcano duct.

The images captured by the volcanic surveillance camera do not show the presence of gas or vapor from the crater and no abnormal situation reports were provided by the local observers network.

The flow of sulfur dioxide emitted by the crater of the volcano remains low and is considered normal for the volcanic system of San Miguel (flow <400 tons / day).

At present, the current activity of the volcano is dominated by the presence and prevalence of high frequency earthquakes, highlighting the presence of cracks and ducts associated with changes in fluid pressure, and magma in the shallow part of the duct of the volcanic system.

The activity of the volcano tends to normalize and for the moment, is not considered a danger for the population, without losing sight of the sudden changes in the equilibrium conditions of the system. These variations are constantly monitored. In Costa Rica, the surface of the acidic lake of Poas remained the same as the previous week; its color is greenish. The evaporation processes remained weak, with constant rainfall. The field of sulfur-rich fumaroles in the northeastern sector maintains its activity.

Seismicity is characterized by a low amplitude background tremor, and discrete LP earthquakes.

Since 19 November, the concentration of sulfur dioxide has increased slightly, while the CO2 / SO2 ratio has decreased; the H2S / SO2 ratio is low and stable The Volcanological Observatory of Piton de la Fournaise, the Volcano City and the Reunion National Park have announced this Friday the baptismal name of the new volcanic cone, resulting from the eruption of 25 to 27 October 2019.

This new cone will be known under the name of Piton Fréri in tribute to a pioneer of the volcano, surgeon of the Navy under Louis XV, who had undertaken the ascent of the volcano by the Great Slopes, in August 1751.