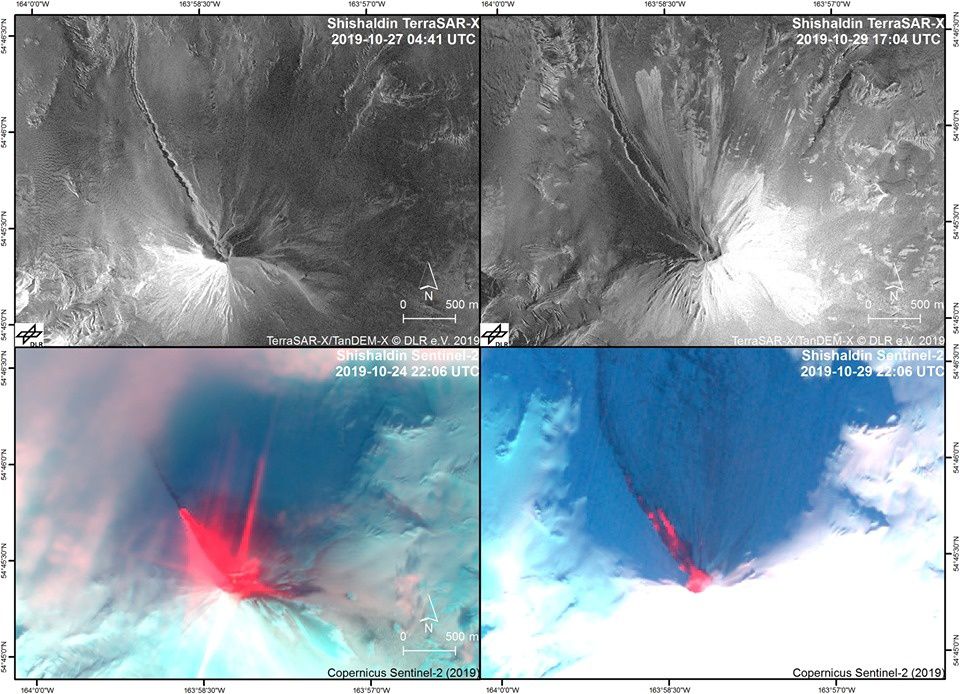 This panel of four satellite images of Shishaldin compares eruptive activity from October 24th and 27th (left) to activity on October 29th (right), and features as documented with satellite radar images (top, aperture radar TerraSAR-X synthetic) and optical / infrared imaging (low, Sentinel-2 natural color composite with short-wave infrared or CRI). This imagery was provided by Simon Plank (German Aerospace Center, DLR) through an ongoing collaboration with the Alaska Volcano Observatory on Remote Sensing of Volcanic Eruptions. - one click to enlarge

The explosive activity is again present at Shishaldin this October 31 from 10:39 local. It is confirmed by the seismic and infrasonic network, and by the thermal anomalies recorded by satellite.

On the above images, the AVO points out pouring deposits to the north with beautiful lobed structures and levees that extend about 1.8 km from the exit. Five hours later, on a corresponding optical image of Sentinel-2, it appears that they are clear with gray streaks, evoking avalanches or a small pyroclastic surge. The northwestward-extending lahar drainage has expanded and overflowed, suggesting that other lahars are running through it. At the top, the cone seems to have been chipped to the north. A new lava flow east of the previous northwesterly flow was produced, flowing 0.8 km from the vent. In Kilauea, HVO scientists conducted preliminary tests of the water at the edge of the caldera a few minutes after it was collected by drone.

The thermal image shows that the water sample in the plastic bottles remained HOT. They failed to obtain a direct measurement of lake temperature, but recent measurements by a thermal camera on the edge of the crater indicate a maximum water temperature of 65-75 ° C

The first tests of the Kīlauea Lake crater lake water sample revealed a pH of 4.2. This value is acidic, but not as low as some other volcanic lakes in the world, where the pH may be near or below zero. The conductivity of the water, related to the amount of dissolved solids, was greater than the upper limit of our current sensor. . Further water analyzes will be conducted by USGS Colleagues at the California Volcano Observatory. 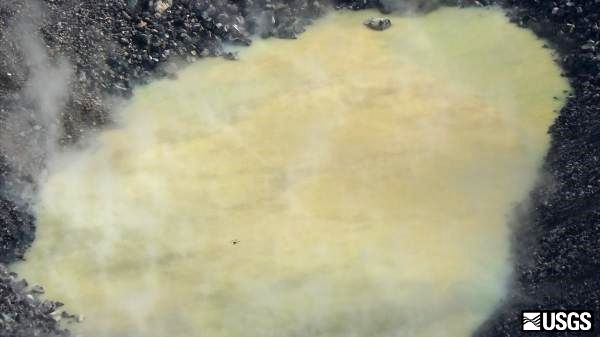 Kilauea - HVO scientists conducted preliminary water tests at the edge of the caldera a few minutes after drone collection. The thermal image shows that the water sample in the plastic bottles remained warm. - USGS images of Mr. Patrick / HVO

Following the findings of the volcanological observatory of Piton de la Fournaise (OVPF) and given the signals currently recorded suggesting that an eruption remains possible in the medium term, the prefect of Reunion decided to return to VIGILANCE phase of the specific device ORSEC of the Volcano Piton de la Fournaise from Thursday, October 31, 2019 at 22:00.
The ban on public access to the upper part of the Piton de la Fournaise paddock is closed as of Friday, November 1st, 2019 at 7:00 am.

The Rivals Trail is open to traffic to the level of Crater Caubet.
The portion between the crater Caubet and Belvédère Castle Fort remains prohibited access In its activity bulletin of October 31st, the OVPF reports a resumption of inflation recorded by the GPS system of the summit zone and in far field, which testifies to the pressurization of a superficial and deep source. Piton de la Fournaise - Illustration of the deformation between 1 ° September and 1 ° November 2019. Here are represented baselines (variation of distance between two GPS receivers) crossing the building of Piton de la Fournaise, at the top ( top), at the base of the terminal cone (in the middle) and in the far field (at the bottom). A rise is synonymous with elongation and therefore swelling of the volcano, inversely a decrease is synonymous with contraction and therefore deflation of the volcano. Any periods colored in light pink correspond to eruptions. - Doc. OVPF