Art on the ways of fire : primitivist Nicaraguan paintings

My friend Ced Nordman has just sent me pictures of Nicaraguan primitivist paintings, decorating one of the rooms, to illustrate the theme of "art and volcanoes". 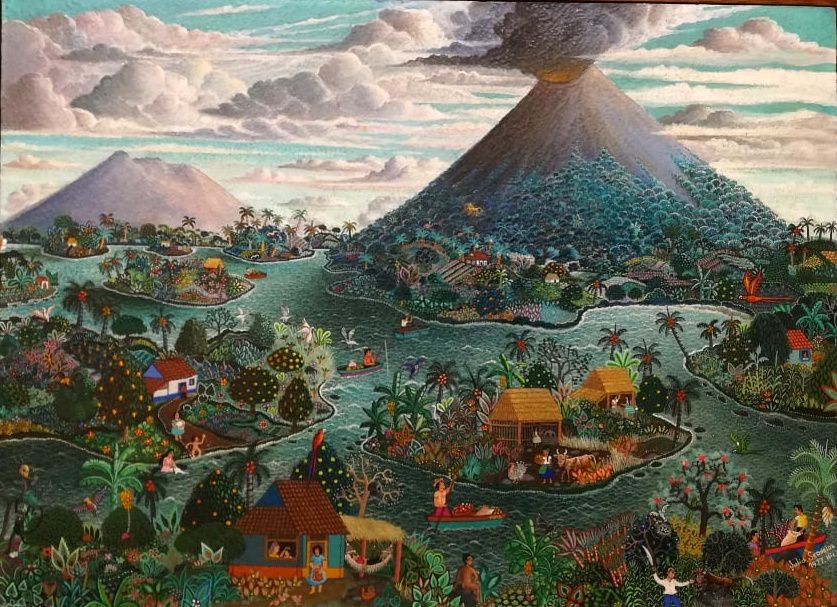 Starting from the observation of their own immediate reality and not from foreign aesthetic theories, these paintings spontaneously express the exuberance of Nicaraguan landscapes, exploiting the color of their flora and fauna, in works of a workmanship that approaches guidelines of so-called naive art. These works, marked by a sincerity of the look, have vibrant colors; the perspective and the proportions between the elements are not always respected. The paintings are spontaneous, reflecting the sensitivity of the painter, and a world, happy, festive, ideally perceived. Arrival of the Spanish galleons, and the battles with the natives - artist not mentioned - Centro de Arte -Fundation Ortiz in Leon - photo Ced Nordman Santiago de los Caballeros de León (its full name in Spanish is little used) is located on the León River, about 80 km northwest of Managua, and about 17 km north of the coast of the Pacific Ocean. Although less populated than Managua, León has long been the intellectual center of the nation, with a university founded in 1813. León is also an important industrial and commercial center.

It was also in this city that in 1979 the last upheavals of a ruthless civil war that lasted three years took place. The square of the city’s very harmonious grand cathedral was the scene of bloody battles in 1979 between the troops of the dictator Somoza and the ultimately victorious forces of the Sandinista uprising.

Thanks to Ced for his information and sharing his photos, wishing him a good trip among the many volcanoes of Nicaragua.