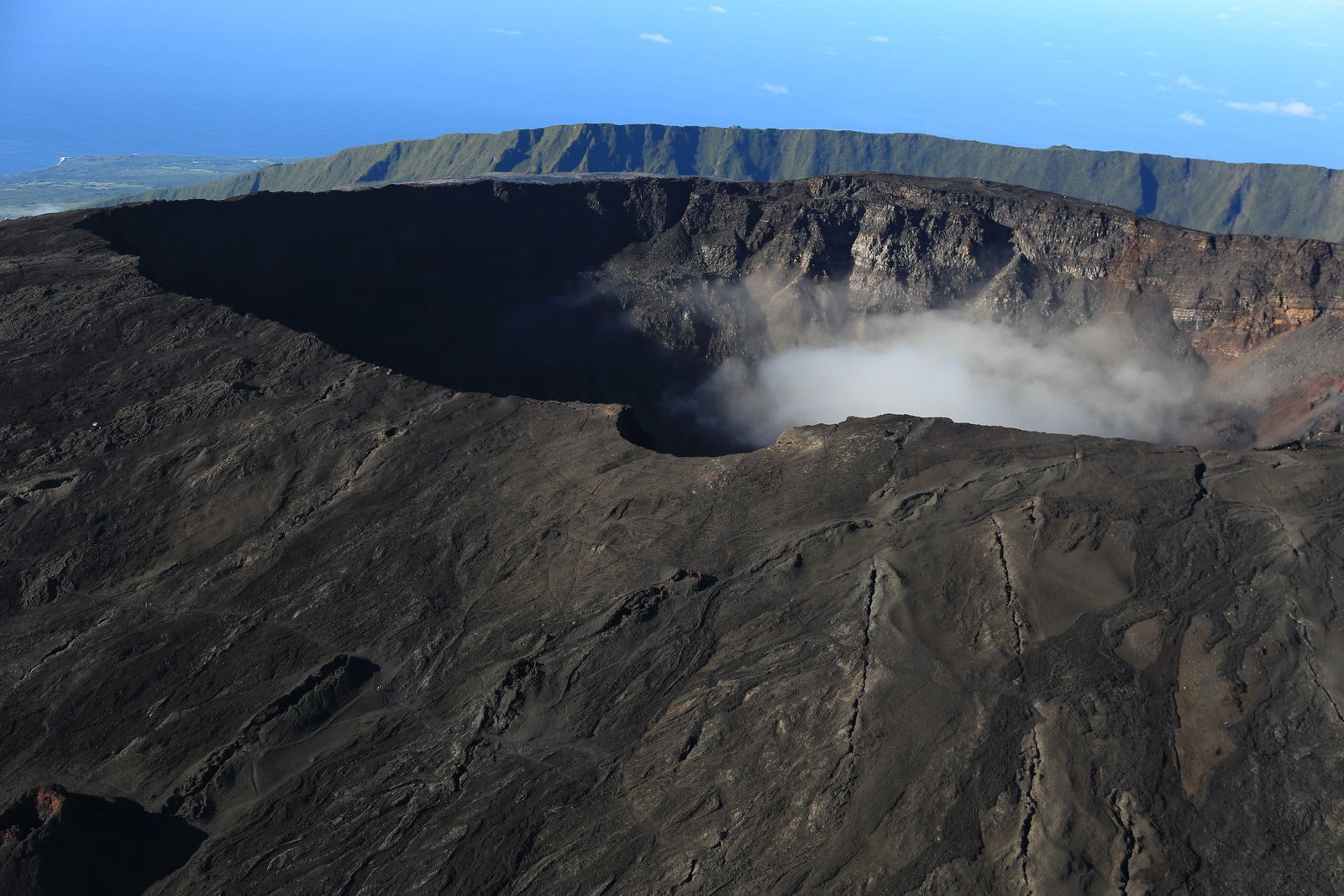 The month of November 2019 will have been marked in Piton de la Fournaise by a low seismicity under the summit craters and a stop of the inflation of the building in mid-November. This shows the cessation (or at least the slowdown) of magmatic transfers from the deep zones to the more superficial zones. 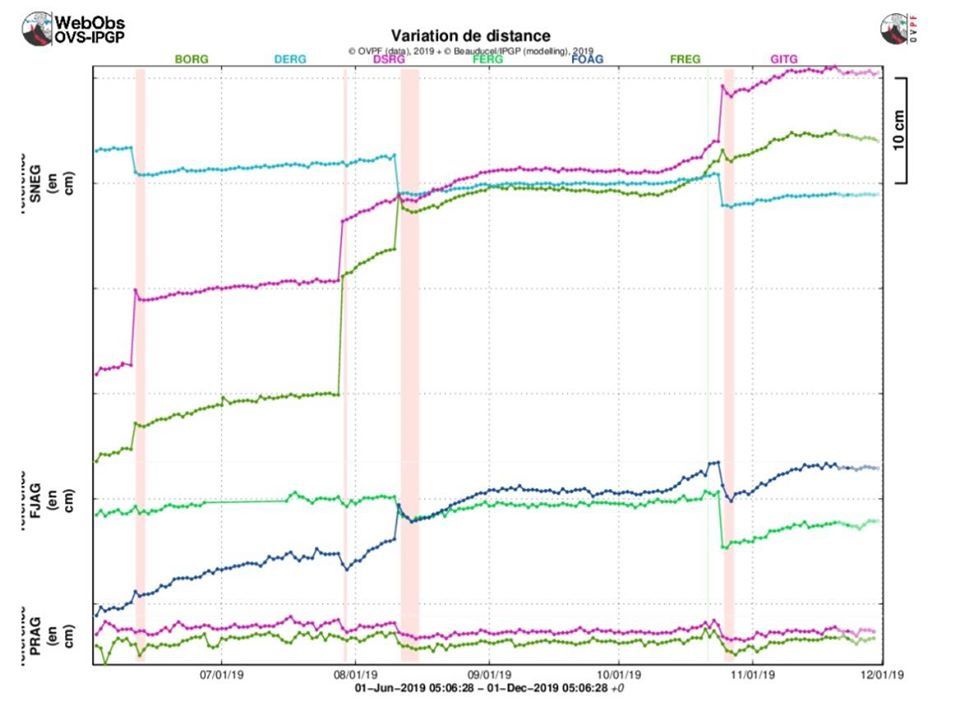 Piton de La Fournaise - Illustration of the deformation over the last six months (the eruptive and intrusive periods are represented respectively in red and green). Here we present the variations in distance between two GPS receivers crossing the Piton de la Fournaise building, at the top, at the base of the terminal cone and in the far field. A rise is synonymous with elongation and therefore swelling of the volcano; conversely, a decrease is synonymous with contraction and therefore deflation of the volcano (© OVPF-IPGP).

In November 2019, the OVPF recorded at the level of the Piton de la Fournaise massif in total:

- 27 superficial volcano-tectonic earthquakes (0 to 2 km deep) beneath the summit craters;

- 269 collapses (in the crater Dolomieu and the ramparts of Enclos Fouqué).

The OVPF has registered at local and regional level:

- 57 local earthquakes (within 200 km of the island, mostly under the island, the Piton des Neiges massif);

Inflation (swelling) of the building that had resumed following the end of the eruption of 11-15 August 2019 stopped in mid-November 2019.

Following the eruptive phase of 25-27 October 2019, the CO2 flux in the soil continues to increase, reaching low intermediate values.

The SO2 flux in the air in the DOAS Enclosed Enclosure is below the detection limit. 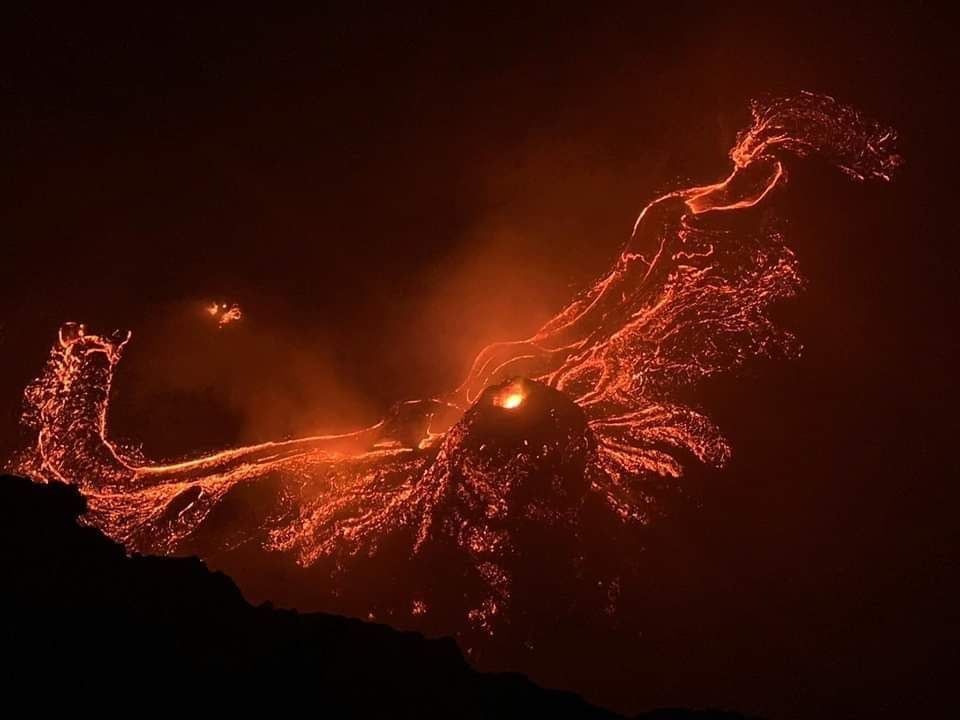 Good news from the Erta Ale, with an activity that resumes in the pit crater south, with lava flow emitted by a hornito, according to the photos put online by Adventure and volcanoes (see Tanguy De Saint-Cyr Facebook's website, with Guy De Saint-Cyr and Henok Gebreyesus.) The northern pit crater is still degassing, and small warm spots are visible south-east of the caldera in the "new" lava field.

Some thermal anomalies are reported by Mirova: between 10 and 61 MW, the highest on November 30th. Under the eastern rift zone of Iceland, it still trembles: a few small earthquakes in the Askja area, and this 1 st December, five earthquakes of magnitude> 2 under the Vanatjökull, in the northeastern zone of the Bárðarbunga caldera.

Since the eruption in Holuhraun, which ended in February 2015, about 200 earthquakes> M3.0 have been measured in the Bárðarbunga caldera.

No signs of volcanic agitation have been detected.