Volcano Sangay, in Ecuador, maintains a semi-continuous activity from two eruptive centers: the central crater and the Ñuñurco vent (southeast).

The central crater exhibits an explosive activity which generates small clouds of gas and ash. In the past month, emissions have reached 2 km high above the crater and have often gone northeast with great variability causing small ash falls in the provinces of Chimborazo, Morona Santiago and Azuay.

On the other hand, the Ñuñurco vent presents an effusive activity which results in an almost continuous emission of lava flows which settle along the south-eastern flank of the Sangay. At the margins of the lava flows are small rock falls (pyroclastic flows) which reach the basin and the upper channel of the Volcan river.

These deposits cause small temporary dams in the Volcán river, which are remobilized by the rains forming mudslides and debris (lahars). Sangay - ash emissions towards Azuay y Cañar, in the south of the province of Morona Santiago - photo 11,12,2019 Cpt. François Kaizin 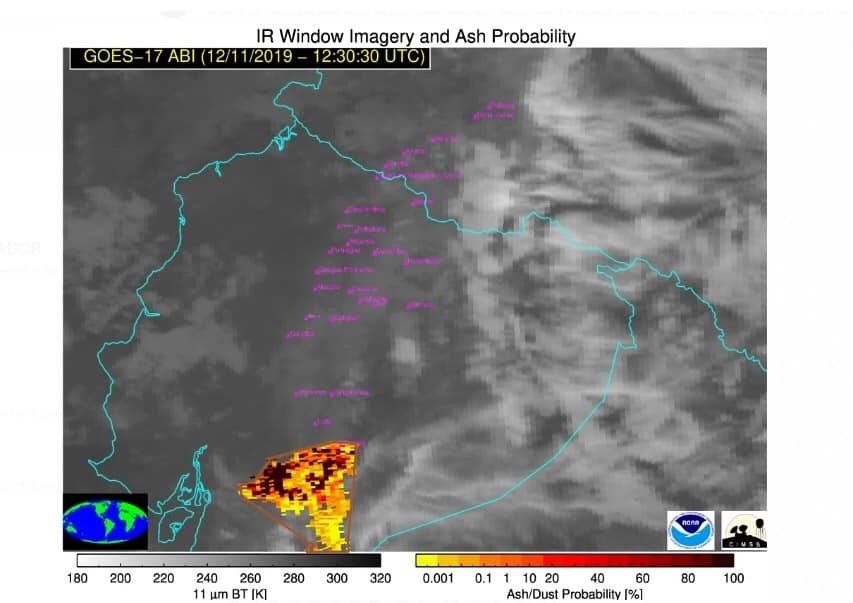 This December 11, the emissions from Sangay were significant and concerned a large southwest sector, according to data from the GOES / NOAA satellite and a photo of Capt. François Kaisin flying over the Amazon.

The IGEPN recommends not to approach the dangerous zones of the Sangay volcano, the cone and the drainage. The INGEMMET, through its Vulcanological Observatory (OVI) identified at Sabancaya - Arequipa volcano, today Wednesday December 11, the occurrence of up to 06 small pyroclastic flows in a south-east direction, reaching up to 1 5 km from the crater; these are the first pyroclastic flows detected since the reactivation of the volcano.

In recent days, the Sabancaya has seen a slight increase in activity, recording larger plumes. It should be noted that Ingemmet warned of the likely occurrence of pyroclastic flows almost 2 months ago.

Faced with these events, the Vulcanological Observatory of Ingemmet recommends:

"Do not approach within 12 km of the crater of the volcano. Pyroclastic flows cause serious damage and human loss.

Stay away from streams / rivers that descend from the volcano, due to the potential location of lahars and pyroclastic flows.

Avoid exposing yourself to volcanic ash, which is harmful to your health. " The alert level of Whakaari / White island has been revised to level 2, as there has been no pursuit of eruptive activity since December 9, BUT the volcanic tremor remains very high, suggesting a possibility of around 50-60% of future eruptive activity. GNS Science has published a map of the access areas: the crater and the areas facing the notch remain prohibited, due to a possible eruption, or discharge of highly toxic gases. The A.P. released a new provisional report on the dramatic eruption of December 9: a total of 16 killed, including 2 after hospitalization and 8 missing and considered dead. Many burn victims have a vital prognosis engaged.

What are the volcanic alert levels in New Zealand? GNS Science monitors all active volcanoes in New Zealand. Find out more here: https://www.geonet.org.nz/about/volcano/val