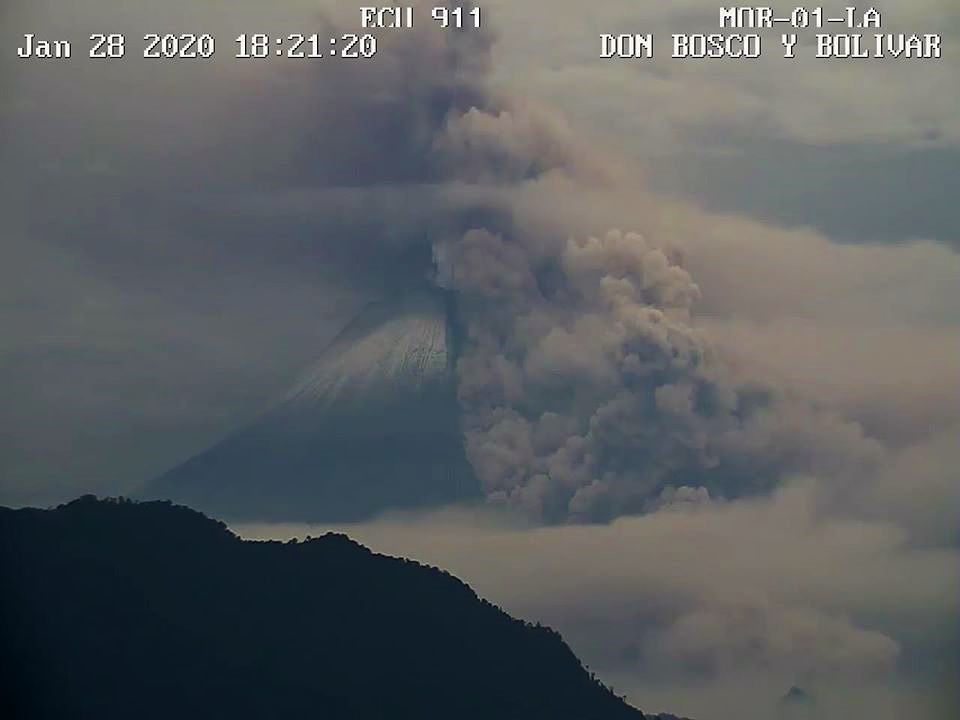 The IGEPN signals for the Sangay a high activity and without change.

In this context, a pyroclastic flow was observed using the ECU 911 camera on January 28 at 6:21 p.m. local, limited to the vicinity of the cone, but given the constant rains over the area, it could generate secondary lahars which can reach the Volcán rios. and Upano. A slight ash fall is reported in the area of ​​Púngala and other communities in the province of Chimborazo.

Thermal anomalies mark this activity, varying between 15 and 237 MW (Mirova) Activity in the main crater of Taal in the past 24 hours has been characterized by a low emission of white to dirty white plumes, loaded with steam, 300 to 500 meters high that drifted to the southwest. Sulfur dioxide emissions were lower than instrumental detection.

In the past 24 hours, the Taal seismic network has recorded one hundred thirty-seven (137) volcanic earthquakes comprising two (2) low frequency events and one (1) harmonic tremor which lasted. for 97 seconds. These earthquakes signify magmatic activity under the Taal building which could lead to eruptive activity at the main crater.

Thermal anomalies are always recorded by the satellites when the weather permits.

Alert level 3 is maintained on the Taal volcano On January 26, 2020, the Operational Land Imager (OLI) on Landsat 8 captured this image of a plume of ash and vapor emanating from the Japanese volcanic island of Nishinoshima, located approximately 1000 kilometers (600 miles) south from Tokyo.

In this image, the infrared data is superimposed on a natural color image to highlight the active flows of the volcano. According to the Global Volcanism Program, the lava flows traveled northeast and entered the ocean, generating plumes of vapor near the shore. The Japan Coast Guards reported a continued increase in emissions from January 15 to 21 from the central crater. In the Reykjanes peninsula, the announced new monotoring devices have been installed: two additional stations are active, one on Mount Thorbjörn, the other at a distance.

The inflation trend is similar to that seen since the start of the seismic swarm on January 21; it is measured at more than three centimeters, according to Benedikt Ófeigsson, specialist in crust movements at IMO. With increased monitoring, more data is now available, which gives a clearer picture of developments in Thorbjörn. The latest GPS analysis shows a movement in progress in the area west of Thorbjörn.

Experts from the Icelandic Meteorological Office, together with employees of HS Energy, have today worked on gas measurements in the Thorbjörn region. These measurements give no indication that the magma has approached the surface.