In the light of Etna monitoring data between February 17 and 23, it is highlighted a strombolian and effusive intracrateric activity of the Voragine crater. Discontinuous ash emissions are observed at the northeast crater and at the new SE crater.

Low seismic fracturing activity is reported; amplitude of the volcanic earthquake in the middle level. The Etna soil deformation monitoring networks have not shown any significant change to report during the last week.

The flow of SO2 is at a medium-low level.

The HCl flow is at an average level.

The flow of CO2 from soils is at medium-low levels.

The partial pressure of dissolved CO2 does not show significant variations. 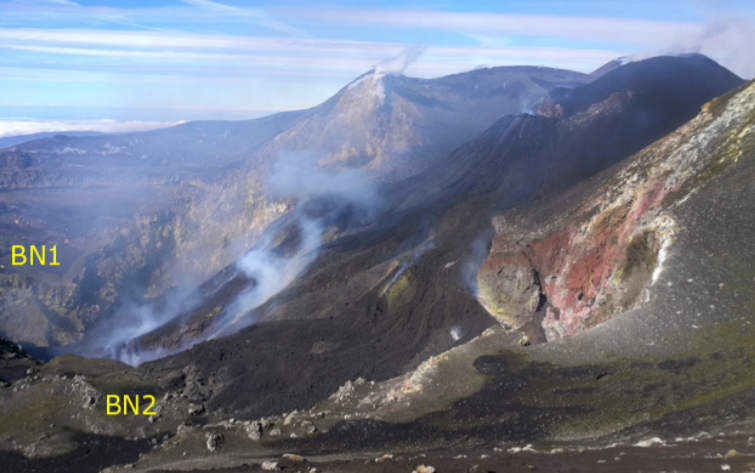 Etna - Taken from the eastern edge of the Bocca Nuova showing the effusive mouth located on the southern flank of the ash cone (black, on the left of the photo) located inside the Voragine on February 19, 2020 (photo F. Ciancitto ). / INGVvulcani

In detail, the explosive activity occurred by a single mouth located at the top of the intracratric cone, and was characterized by small Strombolian explosions, often rich in ashes; while the emission of lava from the effusive mouth placed on the southern flank of the cone had a pulsating character generating the overlap of lava flows which flow into the western depression of the Bocca Nuova (BN-1).

It has also been observed that a new subsidence depression is forming inside the central part of the Bocca Nuova between BN-1 and BN-2.

Strombolian activity increased slightly in the evening of February 25. In Costa Rica, no  eruption is reported from Poas.

Due to the variability of the wind direction, between 7 and 9 am, there were high concentrations of magmatic gases in the Mirador. There is also an increase in SO2 concentrations reaching peaks of up to 25 parts per million. A slight increase in the inflation of the volcanic building continues continuously. At the Rincon de la Vieja volcano, seismic activity is maintained with occasional volcanic earthquakes of low frequency (LP) and of low amplitude, in addition to a tremor of variable amplitude. Between 7 a.m. and 9 a.m., the magnitude of the tremor increased considerably.

Between 5 and 8 a.m., it was possible to observe a plume of gas and water vapor which managed to rise above 500 meters above the level of the crater, before the blanket cloud does not compromise visibility. In addition to the information given yesterday, the activity of Santiaguito is accompanied by emissions of hot materials (boulder or lava flows?) In the drainages, identified on the night images of the Landat 8 bands 7 SWIR satellite ... situation unusual in Santiaguito as R. Escobar-Wolf notes. Activity in the main crater of Taal has been characterized in recent days by low emissions of steam plumes between 50 and 100 meters high, drifting to the northeast.

Note, the return of the waters in the main crater.

The seismicity reports for February 25, 45 volcanic earthquakes, including 2 felt in Brgy, Bilibinwang, Agoncillo and Batangas, with an intensity I. On February 26, 32 earthquakes were recorded.