There was an eruption at Merapi on February 13, 2020 at 05:16 WIB., recorded on a seismogram with an amplitude of 75 mm and a duration of 150 seconds. The eruptive column was observed about 2,000 meters above the summit. The wind direction is towards the northwest. At the seismicity level, the PVMBG provides:

- An eruption earthquake with an amplitude of 75 mm and an earthquake duration of 150.8 seconds.

- 4 avalanche earthquakes with an amplitude of 2 to 15 mm and an earthquake duration of 37.3 to 72.5 seconds. The sliding distance and the direction of fall are not observed.

- 4 low frequency earthquakes with an amplitude of 2 to 5 mm and an earthquake duration of 10 to 20.4 seconds.

- 1 shallow volcanic earthquake with an amplitude of 60 mm and an earthquake duration of 25.7 seconds.

There is no change in the recommendations. People are advised to stay calm and carry out activities as usual outside a radius of 3 km from the summit.

The activity level remains at 2 / waspada, accompanied by a Vona Orange, due to the ash observed at flight altitude 160, which should dissipate within 12 hours At Popocatépetl, 128 exhalations and 523 minutes of tremor have been identified in the past 24 hours (report of February 12/11 a.m.), some of these events have been accompanied by the emission of gas and light amounts of ash which have scattered north-northeast. In addition, a volcano-tectonic earthquake of magnitude 1.5 was recorded today at 07:44.

During this morning and until the time of this report, the emission of volcanic gases and light amounts of ash dispersing to the northeast was presented. On February 13, a strong explosion was observed at 00:55, with incandescent fallout on the first 500 meters of slopes of the volcano and a large plume of ash reaching 1,500 meters in height before dispersing towards the northeast.

The activity remains under the Amarillo Fase 2 volcanic alert The intensity of the volcanic tremor (indicator of the intensity of the eruption) has been relatively stable over the past 24 hours. The increase in the tremor observed around 3 a.m. local time (11 p.m. UT on February 12) is to be linked to the arrival of a rainy and stormy front on the volcano which noises the signals. A new mapping shows a lava front at around 1,400m above sea level.
It is remarkable to note that the highest cracks in altitude (not visible during the flyover of 10/02 and now inactive) opened in the same sector as the cracks of the eruptions of February 18 and June 11, 2019. This location shows that the dike (superficial conduit taking root in a reservoir and allowing the delivery of magma to the surface) which fed this eruption has partially resumed in depth a "path" already opened during previous eruptions, explaining the speed that magma took to reach the surface (23 minutes between the start of the seismic crisis and the opening of the first eruptive cracks on the surface).

Thanks to milder weather, the observatory was able to carry out reconnaissance on Thursday 13 February on the volcano as well as samples. The information obtained by Mirova also benefits from this weather window. 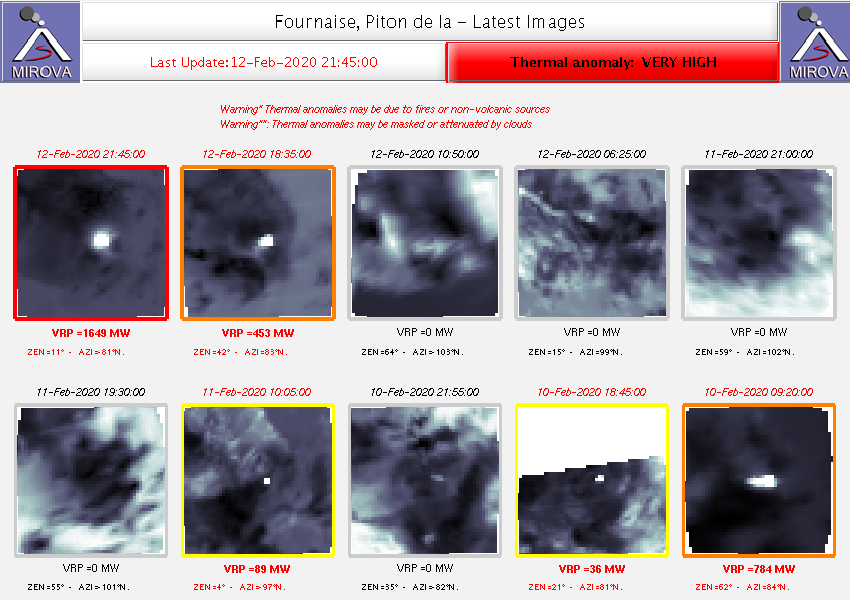 Nicolas Villeneuve: "the eruption is in great shape" Uploaded by IMAZPRESS Réunion on 2020-02-13.

In an interview with Imazpress, Nicolas Villeneuve indicates that " The devices tell us that this is a relatively classic eruption, with a strong degassing at the start and a lot of energy in the seismicity. It has calmed down and remains constant. From what we have seen on the ground, it is sure that it is an eruption in good shape. The flow is not strong but there is speed linked to the slope and the flows are really well marked. "