The improvement in weather conditions that occurred today allowed access to the eruptive site on foot as well as an overview. These two missions show that today only the flow descending to the east is still active. Its front was located around 12:00 p.m. local time on February 13 below the Marco crater at about 1900 m above sea level, about 6.5 km from the RN2.

A cone about 30 m high, began its construction around the 3 vents remaining active this morning. These vents, located at an altitude of around 2200m, produce modest lava fountains with a height of 10 to 15m (above the volcanic cone under construction). - see photo above. 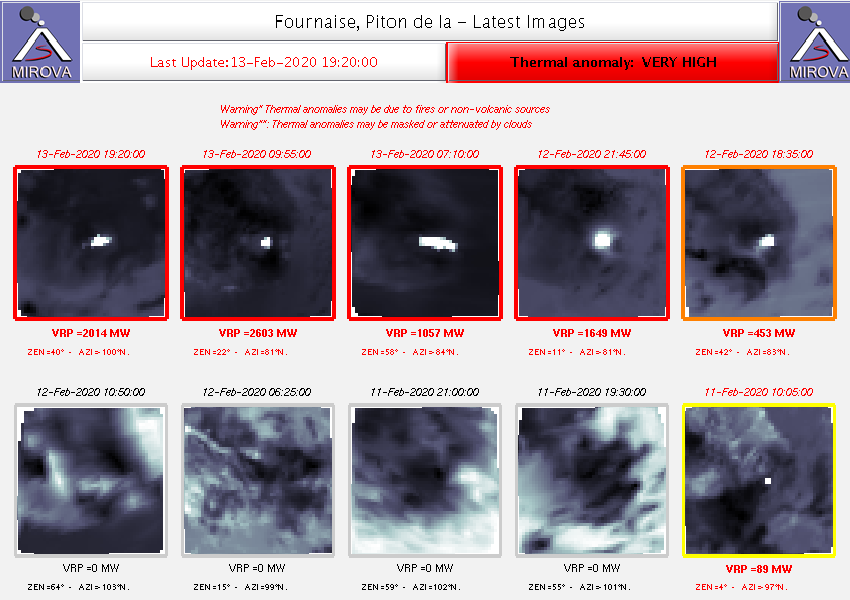 The estimated surface flows, from satellite data via the HOTVOLC (OPGC - University of Auvergne) and MIROVA (University of Turin) platforms, remain severely disrupted by the poor weather conditions observed around Piton de la Fournaise. The rare measurements made, relate to flows lower than 10 m³ / s.

Sunset over the eruption, images by Antoine Bera Uploaded by IMAZPRESS Réunion on 2020-02-14.

After the descent to alert level 3 on January 26, 2020, the state of the Taal volcano during the following three weeks was characterized by less frequent volcanic seismic activity, stabilization of the deformation of the soil in the buildings of Taal Caldera and Taal Volcano Island (TVI) and low vapor / gas emissions in the main crater, justifying the transition to level 2 alert. 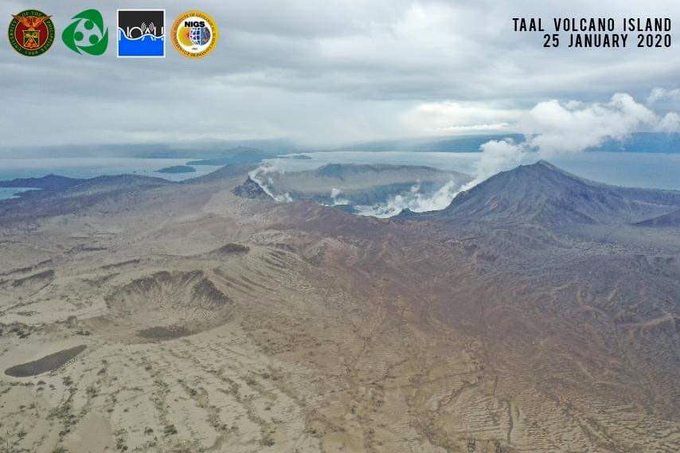 Since January 26, volcanic earthquakes recorded by the Taal Volcano Network (TVN) have reached an average of 141 events / day. The number and energy of tremors and low frequency events associated with activity in the shallow magma and the hydrothermal region below the TVI building have also decreased. These parameters are consistent with the degassing of the magma in the tank rather than with the active transport of the magma to and from the shallow magma reservoir under TVI.

Continuous Global Positioning System (GPS) data from January 13 to February 11 recorded a net subsidence of the Taal caldera and TVI, after an uprising on the northwest caldera and a subsidence of TVI from 12 to 13 January. Subsidence along the Pansipit River valley, where many cracks have occurred, was also recorded by GPS monitoring of the campaign from January 24-27. The overall behavior of deformation of the soil of the Taal volcano for the above periods indicates a post-eruptive subsidence and a relaxation of the building after the halt of the transport of magma, signaled by a hybrid earthquake activity, on 18 January.

Sulfur dioxide or SO2 flux based on Flyspec campaign data was on average 62 tonnes / day since January 26, which corresponds to a source of magma that is little or slightly degassing, to a decrease in activity plume or absorption of volcanic gas by a lake recovering at the main crater and by recovering TVI. hydrothermal system.

The activity in the main crater was characterized by the generation of weak plumes charged with vapor, compatible with a reduction in magmatic disorders.

Alert level 2 means that there is a decrease in disturbances but should not be interpreted to mean that the disturbances have stopped or that the threat of eruption has disappeared. If an upward trend or a marked change in the monitored parameters prevents a potential eruption, the alert level can be raised to alert level 3.

The Geological Survey of Manizales / Colombia reports ash emissions at the Nevado del Ruiz this February 13 at 10:25 am and 11:00 am.

The plume of gas and ash reached a height of about 1,000 meters, dispersing to the northwest of the crater Arenas, with ash falls in this sector.

The activity level is in Amarillo