News from the Reykjanes Peninsula and Taal.

In Iceland, geoscientists met on January 30 for a meeting of the scientific council to examine the situation due to landslides and earthquakes near Thorbjörn mountain on the Reykjanes peninsula.

Seismic activity spreads some cracks north of Grindavík. Three new seismometers are added to IMO real-time monitoring, and two more will be installed in the coming days.

The ground in Thorbjörn is still rising, inflation is 3-4 cm at the highest bridge. The Meteorological Office has installed three new GPS meters in the region. The results obtained indicate that the ridge begins about 4 km deep, but considerable uncertainty persists at the depth of the center of expansion. The signs observed correspond to the accumulation of magma in the crust. Calculations from the model indicate that its volume is now 1 to 2 million cubic meters. No effect of magma has been observed in the geothermal system of Svartsengi.

The meeting was attended by: scientists from the Icelandic Meteorological Office, the Institute of Earth Sciences, ISOR as well as representatives of the Civil Protection Department of the National Police Commissioner, HS- Orka, the Environment Agency and the Suðurnes police. 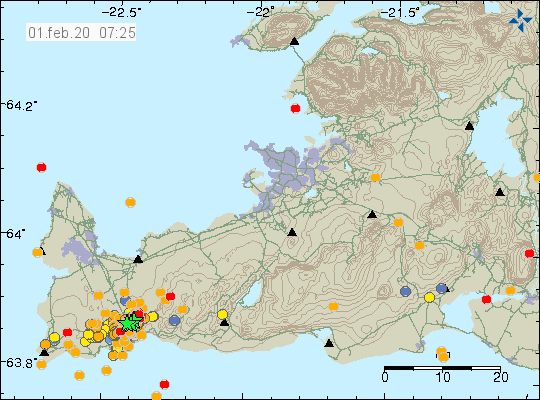 Continued seismic activity was observed in the vicinity of Grindavík on the evening of January 31. At 10:22 pm, an earthquake of magnitude 4.0 and at. 22:24 was another size of 4.3, both about 5 km northeast of Grindavík. Considerable seismic activity is expected to continue. The earthquakes were reported in Reykjanes, in the capital region and in Borgarfjörður. These are the largest earthquakes that have been detected in the hryvnia. Activity in the main crater of Taal in the past 24 hours has been characterized by the emission of 50-meter-high vapor-laden plumes, drifting southwest.

Sulfur dioxide emissions have been measured at an average of 65 tonnes / day.

The Taal seismic network recorded one hundred and eighty-two (182) volcanic earthquakes, including one (1) low frequency event and one (1) harmonic tremor which lasted 3 minutes. These earthquakes signify magmatic activity under the Taal building which could lead to eruptive activity at the main crater.

Alert level 3 is maintained on the Taal volcano. DOST-PHIVOLCS reminds the public that sudden and even faint steam-driven explosions, volcanic earthquakes, falling ash and deadly volcanic gas expulsions can still occur and threaten areas of the island's volcano Taal and the shores of the lakes nearby. DOST-PHIVOLCS recommends that entry to the island of the Taal volcano as well as to the areas on Lake Taal and the communities to the west of the island within a radius of seven (7) km from the main crater must be strictly prohibited.

Cleaning continues in accessible areas ... many have lost everything in the areas most sprayed with ash and shaken by earthquakes.

The damage to particular (unaccounted for) and regional infrastructure is enormous:

Two other national bridges in Batangas were damaged by the eruption of the Taal volcano, amounting to more than 9 million PHP, said the Minister of Public Works and Highways (DPWH) on Friday. He added that the Calbangan bridge on the Palico-Balayan-Batangas road in Barangay Mataas na Bayan, Lemery and the Laguile bridge on the Lemery-Taal diversion road in Barangay Laguile, Taal, each suffered about 4.77 million PHP .

The village said the estimated cost of damage to national roads and bridges due to the eruption was PHP 153.32 million at 8 a.m. Friday.

Earlier, the DPWH announced that five roads in Batangas had been damaged by earthquakes. The DPWH also reported that at present, the Talisay-Laurel-Agoncillo road remains impassable due to the damaged pavement and locking.