Semeru - lava dome in the summit crater Jonggring Seloko, and the ravine on the southern flank - photo Google Earth archives 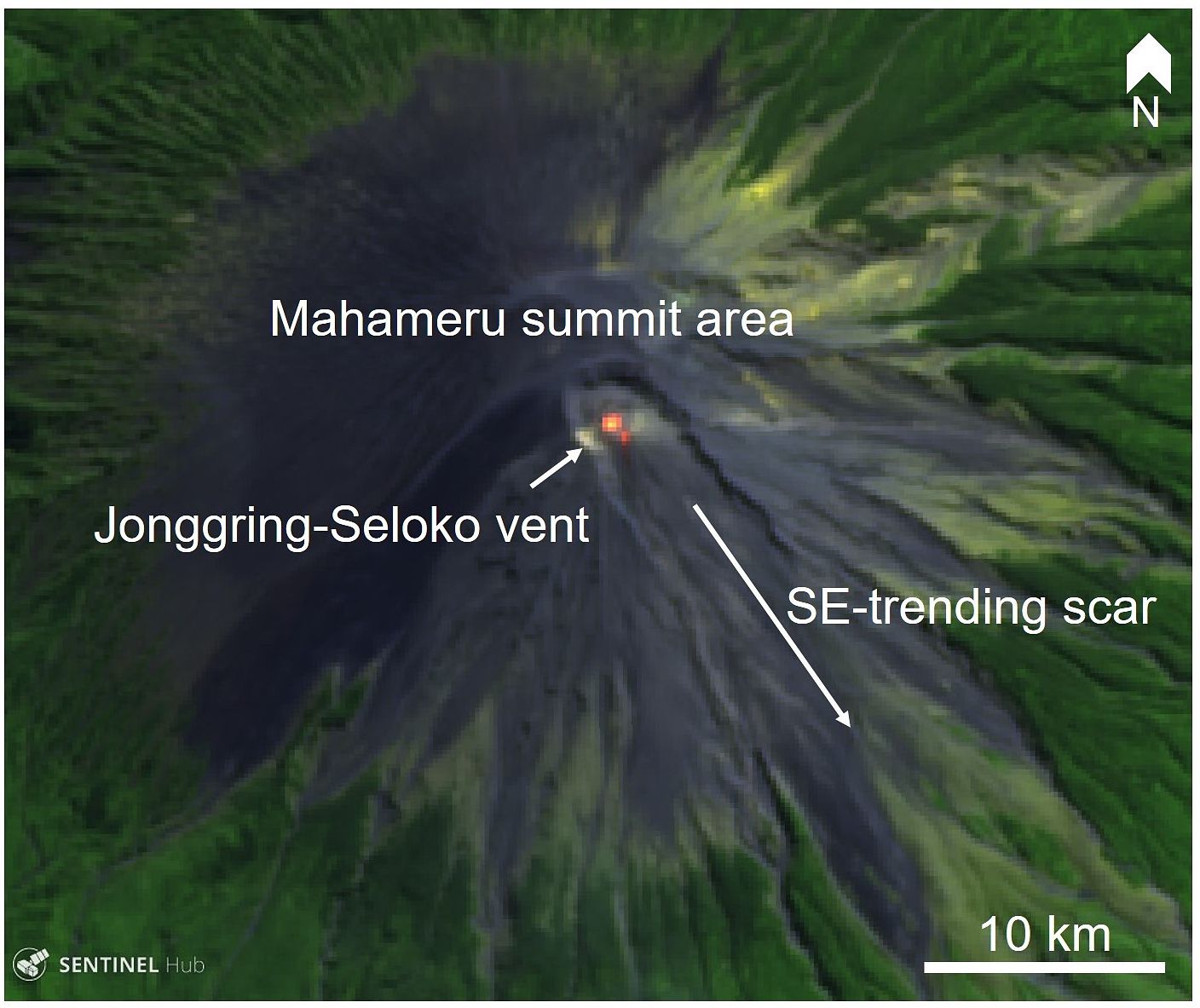 In Java, the PVMBG reports that the Semeru has more plumes of ash than usual, reaching up to 400-500 meters above the crater since the end of January.

At the seismicity level, the day of February 6 is marked by

- An episode of harmonic tremor, with an amplitude of 17 mm and an earthquake duration of 150 seconds. The alert level remains at 2, with the recommendation not to carry out activities within a radius of 1 km and the zone up to 4 km in the south-south-east slope sector of the active crater which is the active zone crater openings by G. Semeru (Jongring Seloko) and the descent channel of the pyroclastic flows. The area of ​​the lava dome in the Seloko Jongring crater is considered fatal. On Big Island, Kilauea and Mauna Loa are NOT erupting.

For Mauna Loa, deformation and seismicity rates have not changed significantly over the past week and remain above long-term background levels. 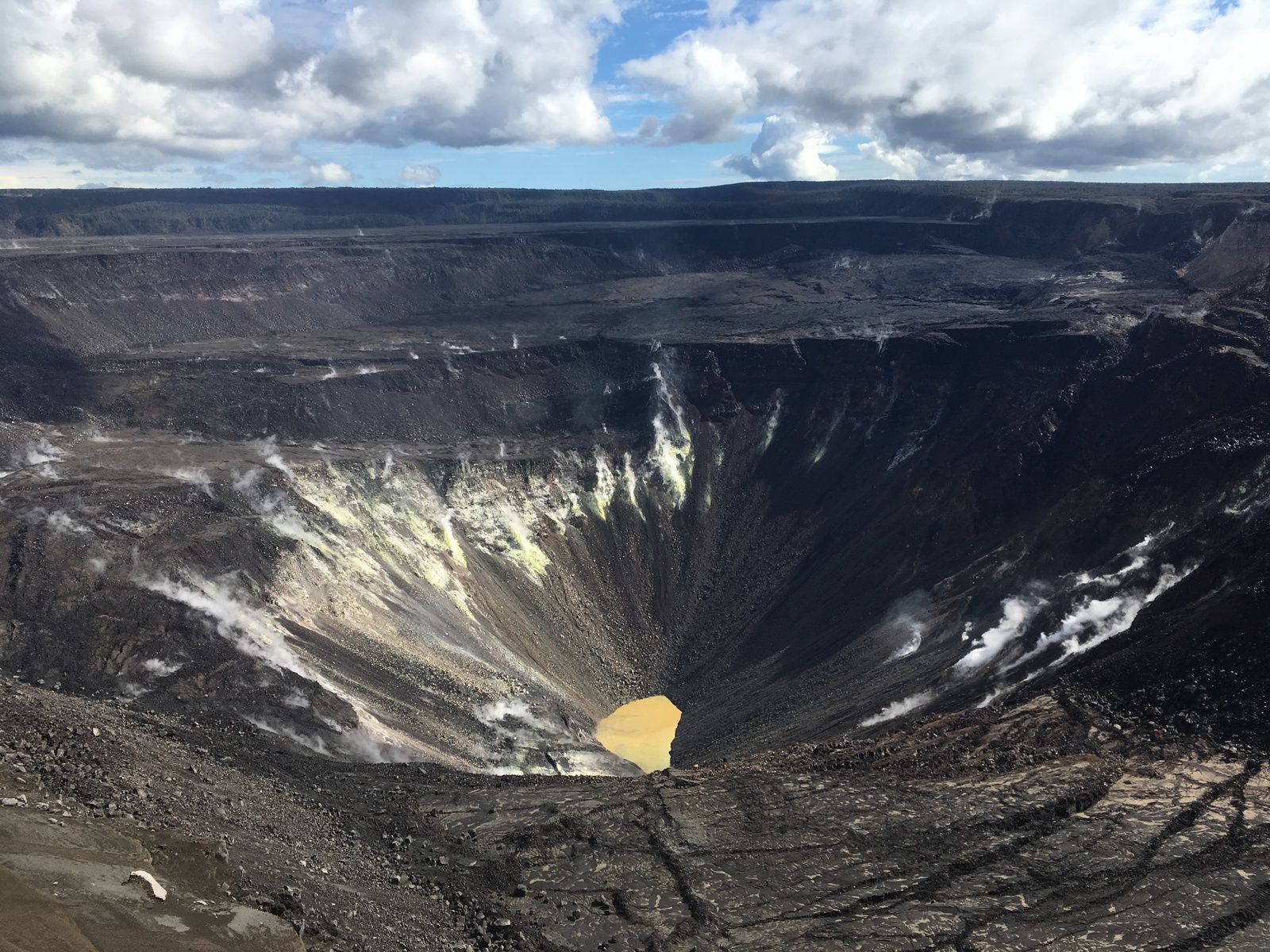 Kilauea - crater lake in Halema'uma'u crater, diameter of about 94 m north-south and about 192-195 m east-west. Too much steam at the west end disturbed the measurements this morning. Two small circles above the northeast edge of the water show how much the lake has increased since January 24. - USGS photos by D. Swanson 18.01.2020.

With regard to Kilauea, the seismicity rates during the month were variable but remain in the long-term values. Sulfur dioxide emission rates are low at the top and below the detection limits at Puʻu ʻŌʻō and in the lower East Rift zone. The pond at the bottom of Halema'uma'u, which began to form on July 25, 2019, continues to expand and deepen slowly. At the beginning of February, the dimensions were: 95 meters by 194 meters. The current depth is around 25 meters.

In the past month, eight deflation-inflation (DI) events occurred below the peak, slightly less than the previous month. Since early March 2019, GPS stations and inclinometers at the summit of Kīlauea have recorded a deformation consistent with a slow accumulation of magma in the shallow part of the magma system at the summit of Kīlauea (1-2 km or about 1 mile below the ground level). Further east, GPS stations and inclinometers continue to show movements compatible with the slowed-down filling of the deep magma reservoir in the East Rift Zone in the vast region between Puʻu ʻŌʻō and Route 130.

Although not currently erupting, areas of high and persistent ground temperatures and minor gas releases are still in the vicinity of the cracks in the lower east rift zone 2018. These include steam (water), very small amounts of hydrogen sulfide and carbon dioxide.

Dangers remain in the eruption zone of the lower East Rift zone and at the summit of Kīlauea. Residents and visitors in the vicinity of the cracks, lava flows, and the summit collapse area in 2018 should heed warnings from Civil Defense and Hawaii County National Park.