A new change in eruptive behavior is reported to the Fuego this March 15 from 19:24, with an increase in degassing accompanying the lava flow, well observable at night on about 600 meters long in the Trinanca barranca.

An increase in avalanches is reported in Las Lajas, Trinidad and Cenizas barrancas.

The seismic activity presents a continuous signal of low amplitude in relation to the expulsion of the materials feeding the lava flow and its degassing. 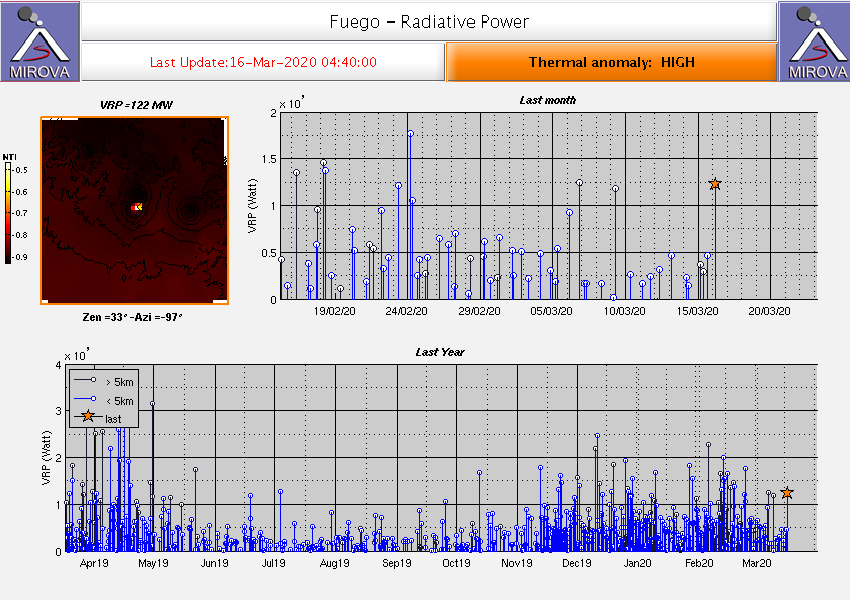 In Costa Rica, the Ovsicori reports an eruption (probably of phreatic type) this March 14 at Rincon de La Vieja. It was accompanied by a strong tremor between 6:45 p.m. and 8:30 p.m. local. The height of the plume could not be estimated.

The neighbors indicate that the Quebrada Azufrada shows the presence in a small quantity of volcanic matter, transported by its waters. The seismicity of Semisopochnoi, in the Aleutian arc, has increased in recent days, characterized by almost continuous tremor and frequent signals of small explosions.

The AVO consequently raised the volcanic alert to Watch on March 15 and the aviation code to orange. On March 14, starting at 6:30 am local time, the monitoring stations of the Puyehue-Cordon Caulle volcanic complex recorded a swarm of 185 volcano-tectonic earthquakes, associated with rock fracturing, at 1,600 meters NNW from the emission center of 2011; the most energetic earthquake was Ml 2.2 at a depth of 4.3 km.

No surface activity has been described by the Sernageomin and the technical alert level remains green.